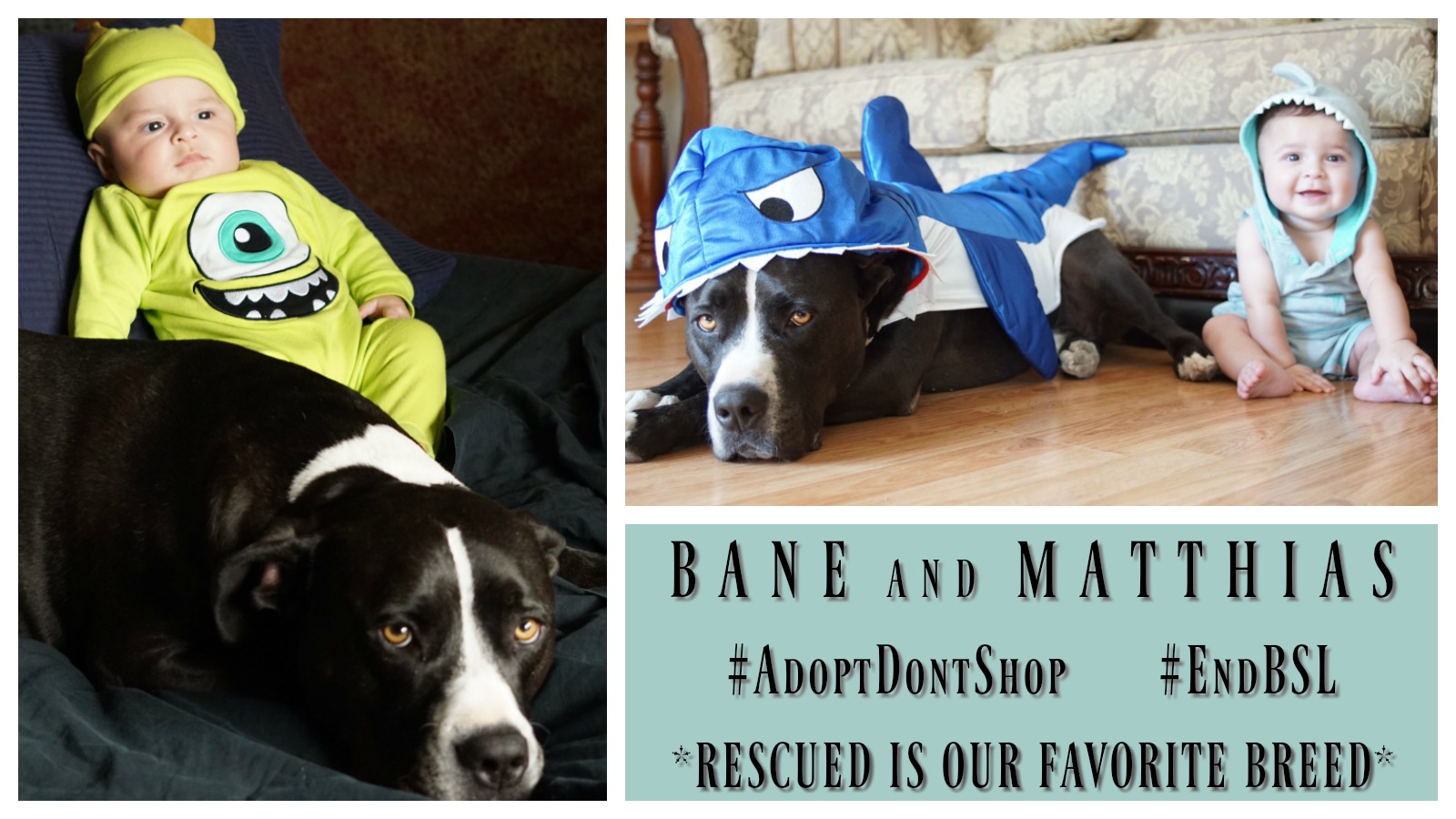 Jessica has always loved dogs, but her mom had never been a huge fan, so growing up, she never had a dog. At the age of 21, she was finally ready to be responsible for another life other than her own. She didn’t know much about rescues or how they worked, but she did know was that millions of dogs enter shelters and never come back out. The first place she looked was the OC Shelter in Orange, CA. There were so many dogs waiting to be rescued and she was so overwhelmed because she wanted them all. 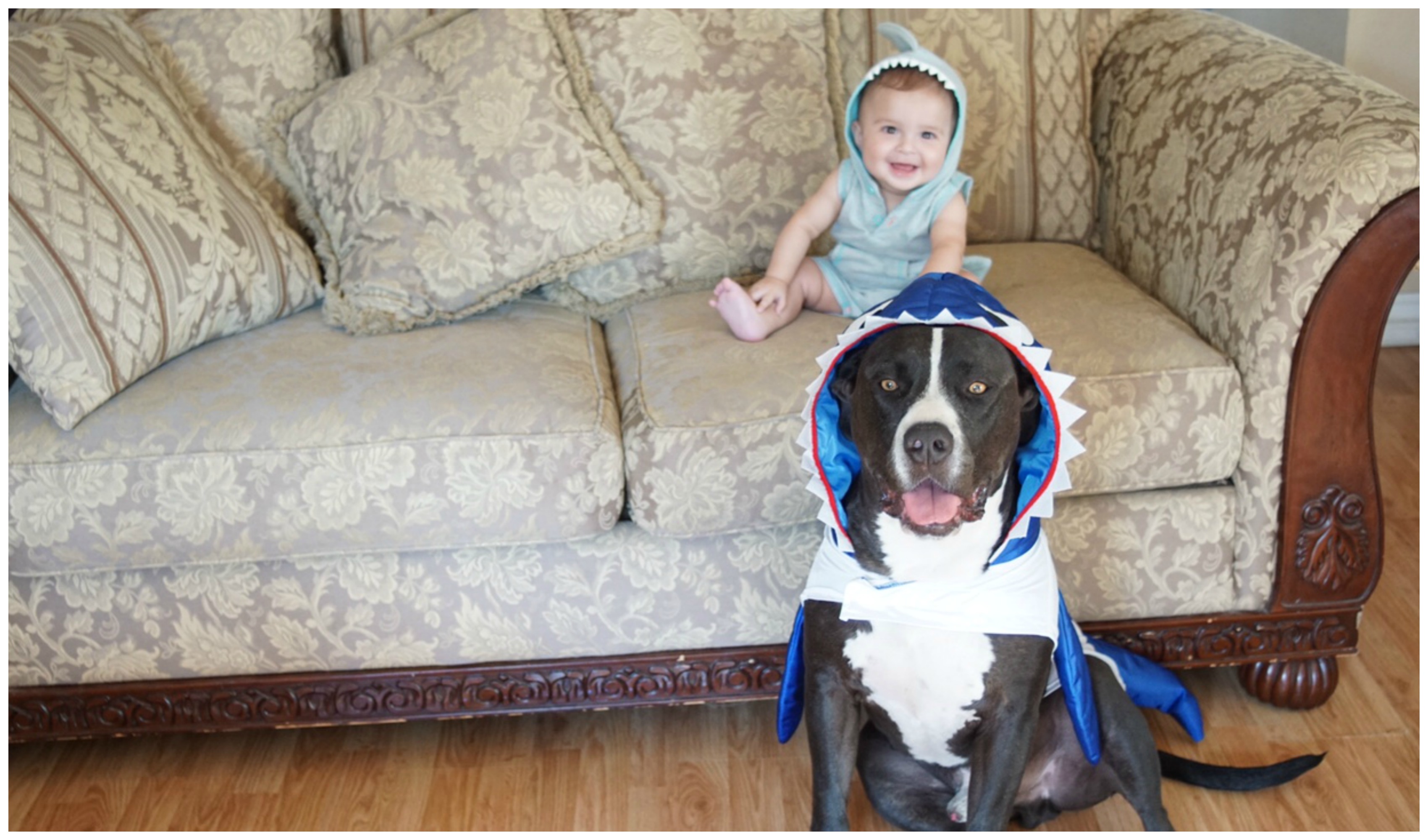 Jessica did know that she wanted to adopt a Pit Bull, because growing up, she had a life changing experience. At the age of eight, she and her family were living in a nice neighborhood in Orange. It seemed like everyone in their cul-de-sac had a pup but them! Their next-door neighbor especially had a lot of dogs, and looking back, Jessica thinks he may have been a Pit Bull Foster or just loved rescuing pibbles! 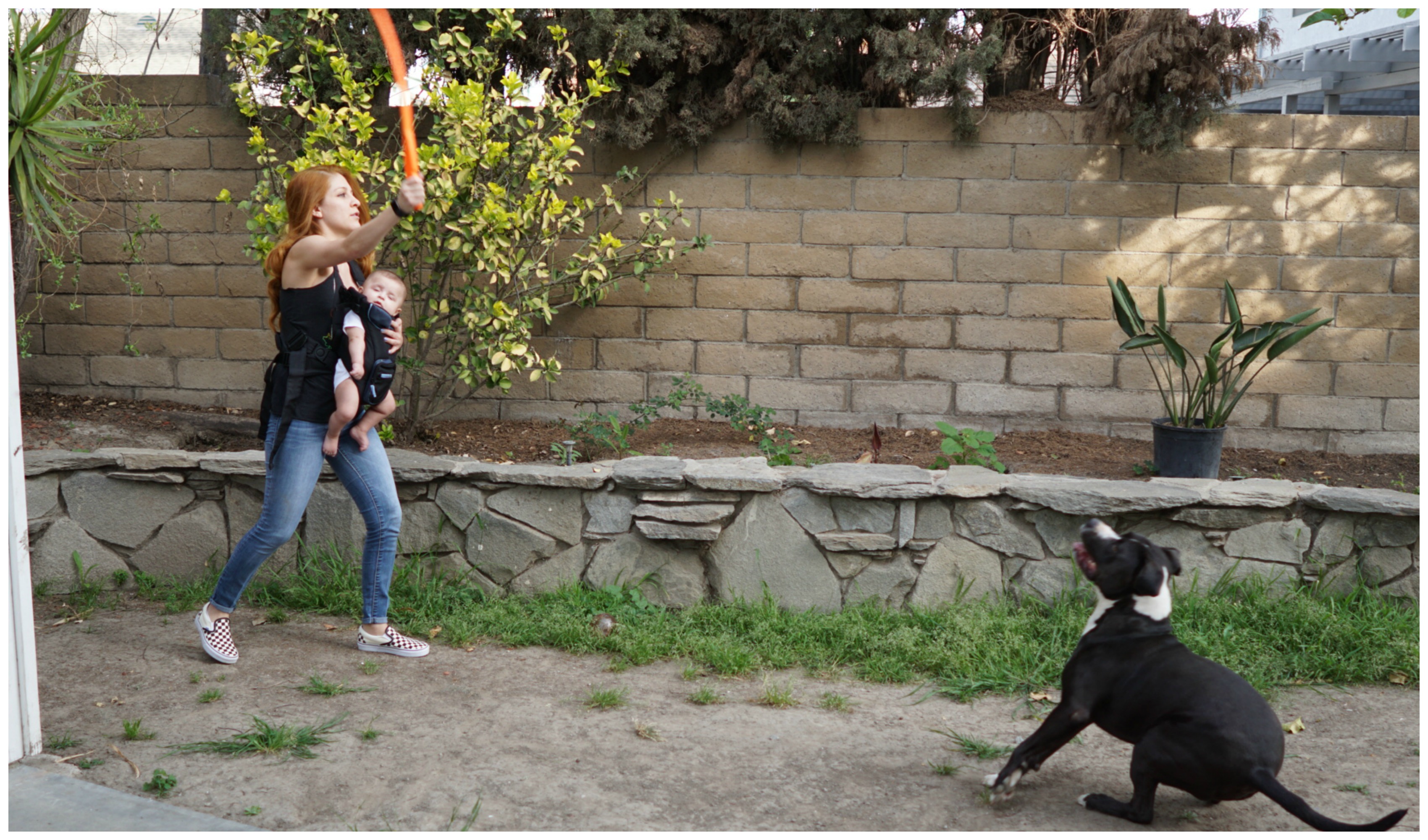 One day, Jessica was slamming a hard ball against a wooden wall, and it made a lot of noise. At one point, she threw the ball so hard it bounced back onto the street. She had her back turned to her house. She turned back around and saw six Pit Bulls standing behind her. At that time, she had no idea what type of dogs they were…she just knew they were as big as her. She immediately burst into tears, was scared, panicked, and had no idea what to do! She thought they were going to attack her, but they did the total opposite. One of the pups (Jessica still calls her the Mama Pit/ leader of the pack) came up to her and put her huge head under her hand, and just looked up, letting her know that everything was okay and nothing bad was going to happen. Jessica stopped crying. She looked around, wondering if anyone had seen what just happened. She pet the Mama Pit softly and the rest of the pack approached slowly. At that moment, Jessica knew that they didn’t want to hurt her. They just wanted to play catch with the ball she had been throwing around. She walked away slowly, trying not to startle them, and just left the ball there for them to play with. 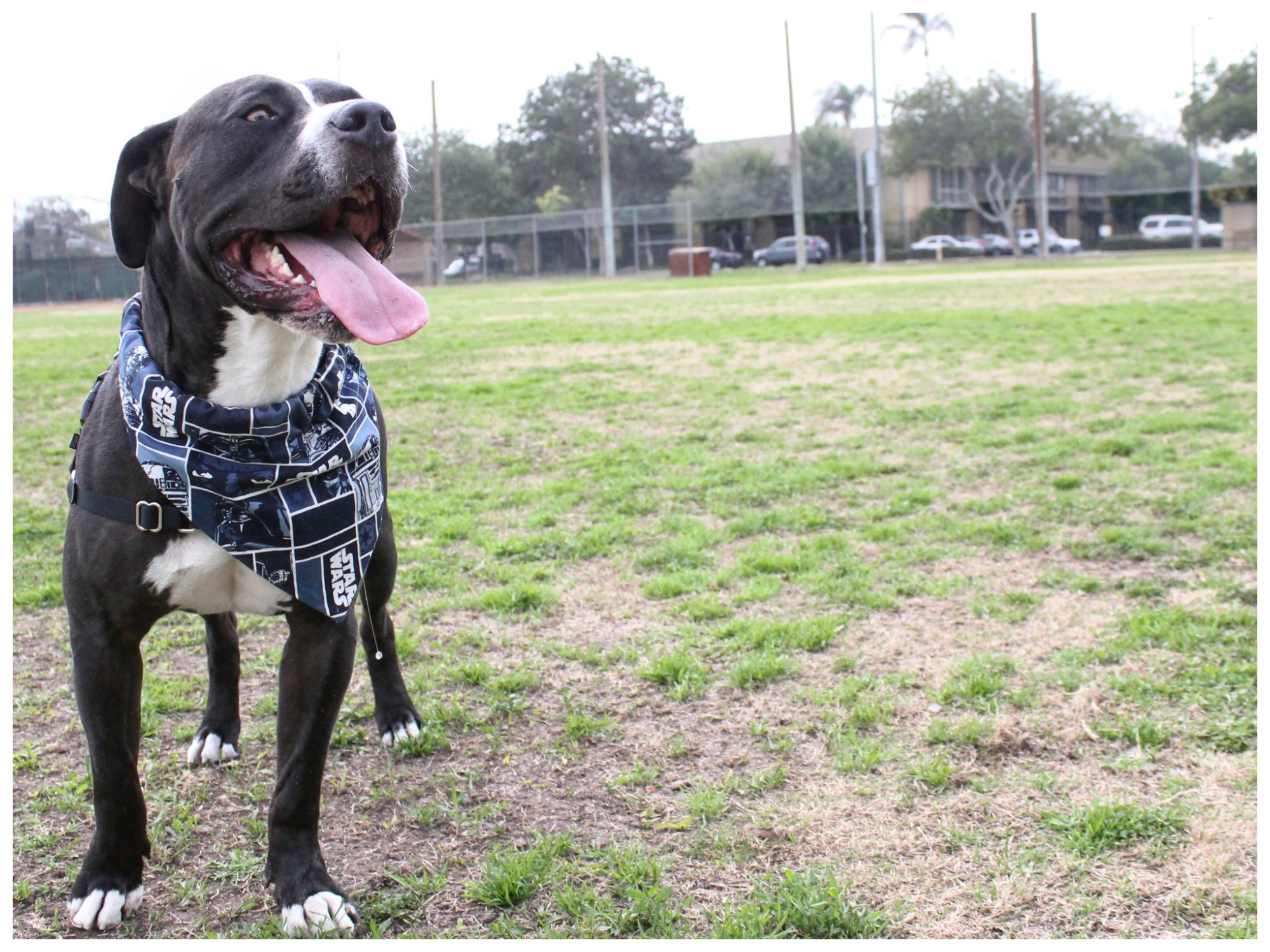 Once Jessica got far enough, she ran inside and told her dad what had just happened and he ran out to see that all the dogs were gone. Later that day, they were getting in the car to head out, when Jessica sees her neighbor. She jumped out of the car and let him know how nice his dogs were. She asked him “what kind of dogs are they? They’re really nice, I’d like to play with them some day.” That’s when he introduced her to Pit Bulls and Pit Bull type dogs. Of course, at that age, she had no idea what type of stigma was associated with these dogs. All she knew was how loving, gentle and clearly playful they were. From that day forward, Jessica begged her mom every day for a dog. Not just any dog, a dog like her neighbor’s — a Pit Bull. The dogs she met were loving, caring, beautiful and gentle souls. It wasn’t until Jessica grew older that she learned about the “bad” behind the breed. That’s when she knew she had to speak up for them. She tells her story so much, people think she’s making it up. Jessica decided to become a voice for the voiceless.

Finding a Pit Bull at the shelter was not an issue. There were so many that it broke Jessica’s heart. But out of the blue, she got a call from a friend she hadn’t talked to in a while. He knew how passionate she was about the breed, so he wanted to let her know that a person in his neighborhood had posted a sign “Pit Bull puppies for sale”. Right away, she knew how bad this could have ended because it was in a bad neighborhood. They contacted the person and he was asking for a ridiculous amount of money because they were “show dogs”. He did mention that he was having a hard time “getting rid” of the two last puppies because they were the runts of the litter. If Jessica didn’t come by Saturday, they were going to the shelter. She had a good amount of money saved up, so she told him to please wait and she’d give him what she had. She even offered to get the mom spayed, as well. He agreed, but once she came to get them, only one puppy, now known as Bane, was left. Jessica was so devastated because she doesn’t know who the sister ended up with, and if she went to a good home or not. To top it off, the mom passed away because she had “complications”.  All Jessica wanted to do was get Bane out of there.

When she got there, he was in the backyard with dirty blankets, poop everywhere, there was a horrible stench and there were unsafe kennels made out of old wood. Bane was about three months old, tiny and underweight. Jessica took him to the vet right away to get checked for everything. The vet said he wasn’t in too bad of a condition, but he did have demodex mange. He was pretty bald all around his eyes and nose, and if he didn’t receive treatment soon, it would have become much worse. Jessica knew Bane came from a horrible backyard breeder, and she let the authorities know. They kept an eye on the house. 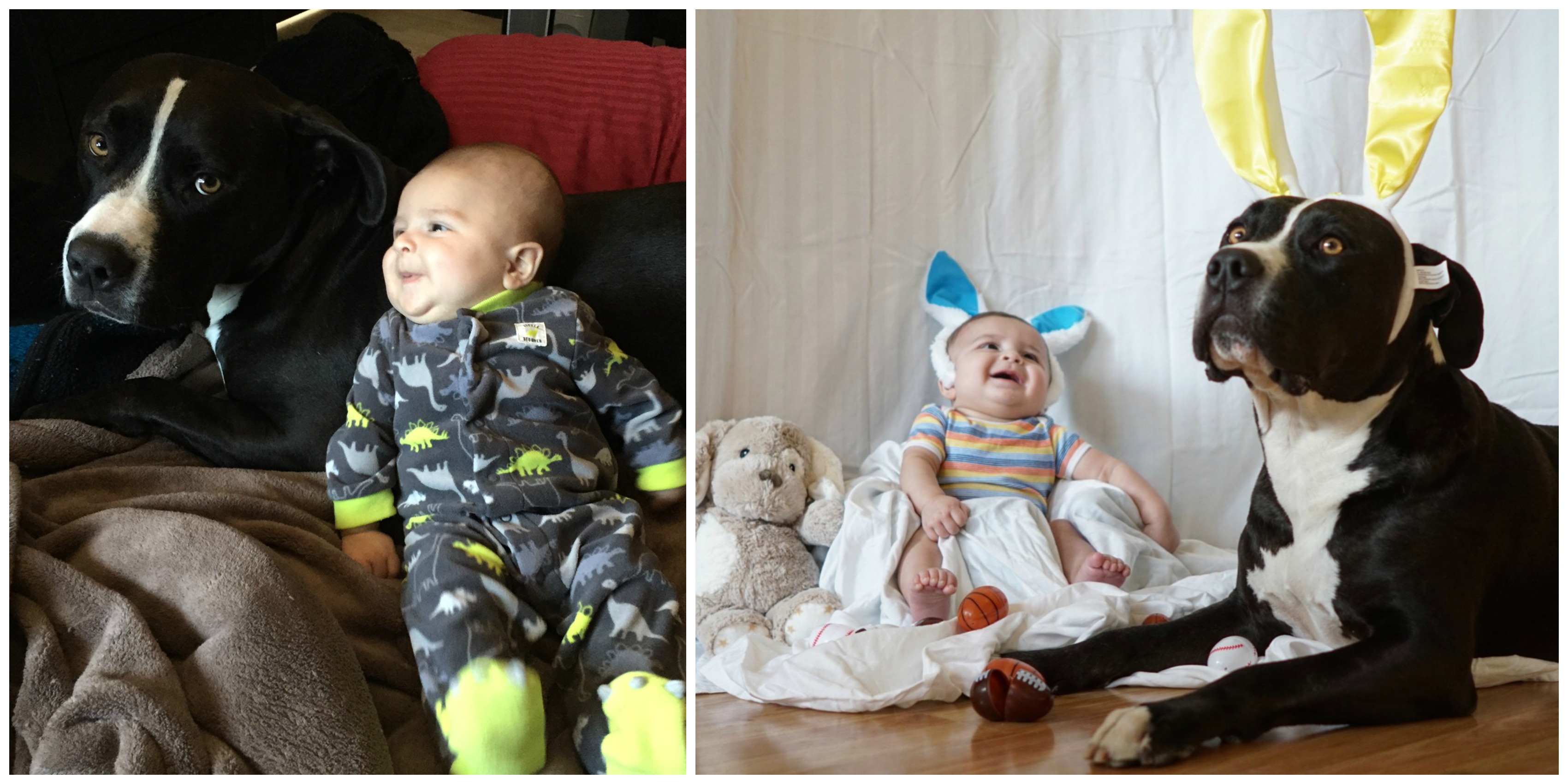 Once Bane came into Jessica’s life, she became a lot more aware of what Pit Bulls and Pit Bull type dogs goes through. She kept reading and educating herself. She also started following some amazing rescues who have taught her so much and who have inspired her. Jessica and her family are currently saving up to buy a home with enough space to be able to foster and rescue pups. 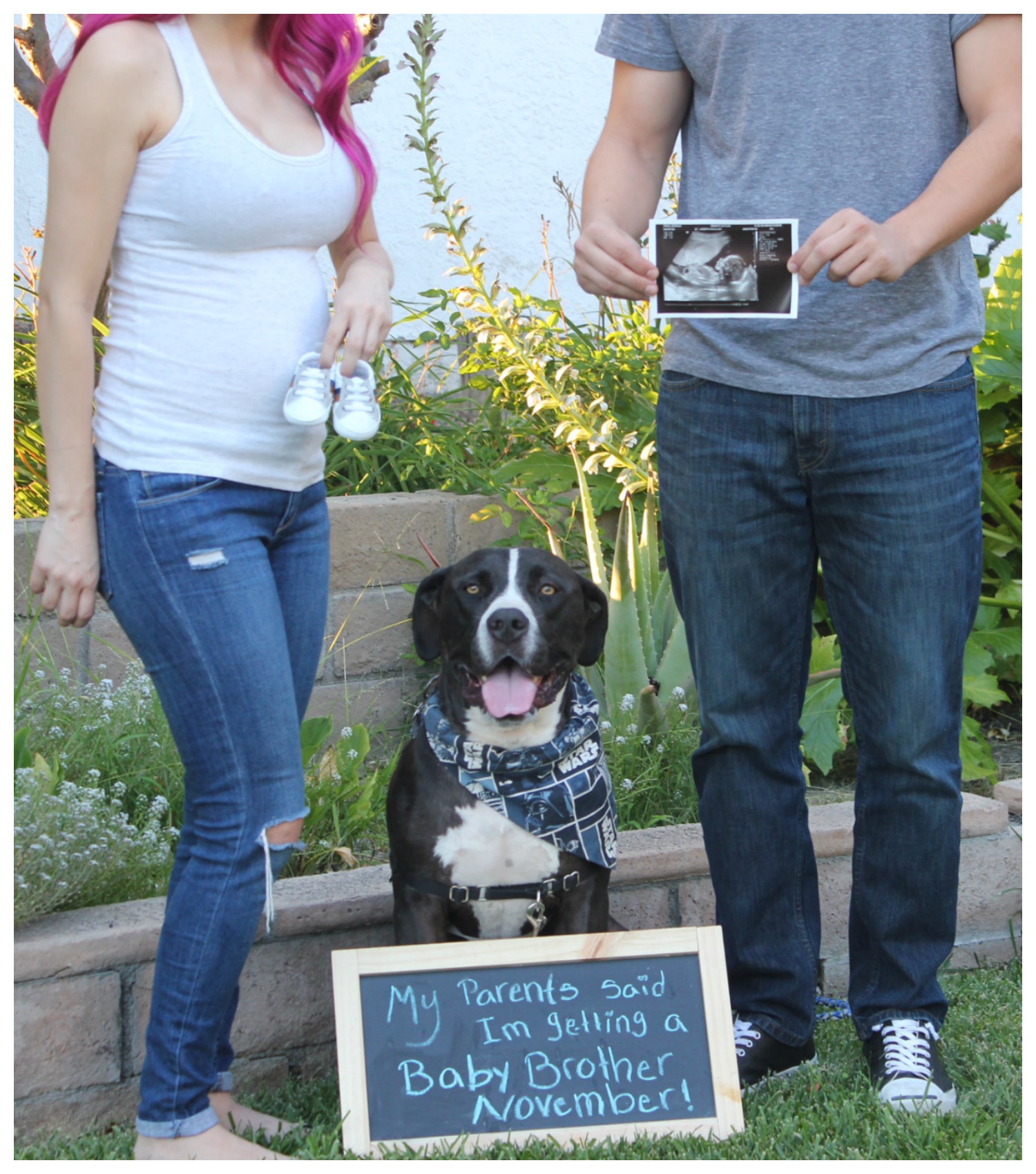 Bane, although a little rough around the edges, now lives a happy life, and loves his family unconditionally. Bane was the first one to find out Jessica was pregnant, even before her. She had noticed a lot of changes in his behavior. He became a lot more protective of his forever mom when they went out on walks and wouldn’t let her walk next to the street. He started cutting her off when he noticed her getting too close to the edge of the curve and he became a lot more cuddly. Turns out, he knew there was a baby in her belly all along! 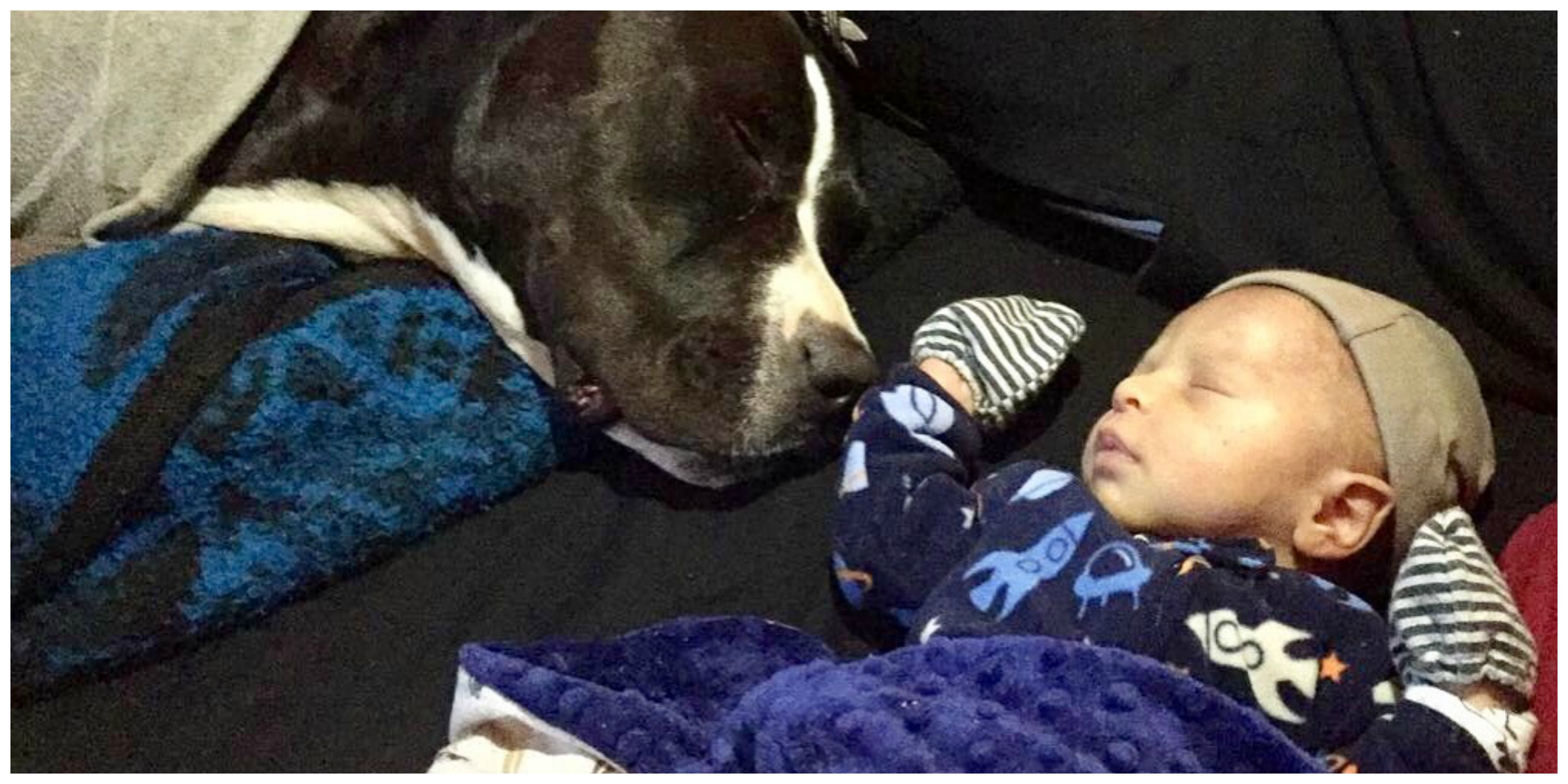 The whole family, Bane included, were incredibly excited, awaiting the arrival of Matthias. They even got Bane some extra obedience classes at Wags & Wiggles in Tustin. They helped Bane prepare for his little, human brother. Bane thought he was a 25 lbs lap dog because he grew up with one, and he would throw himself on you and jump on you. Bane’s parents had to make sure he knew to be gentle with his new, little human. 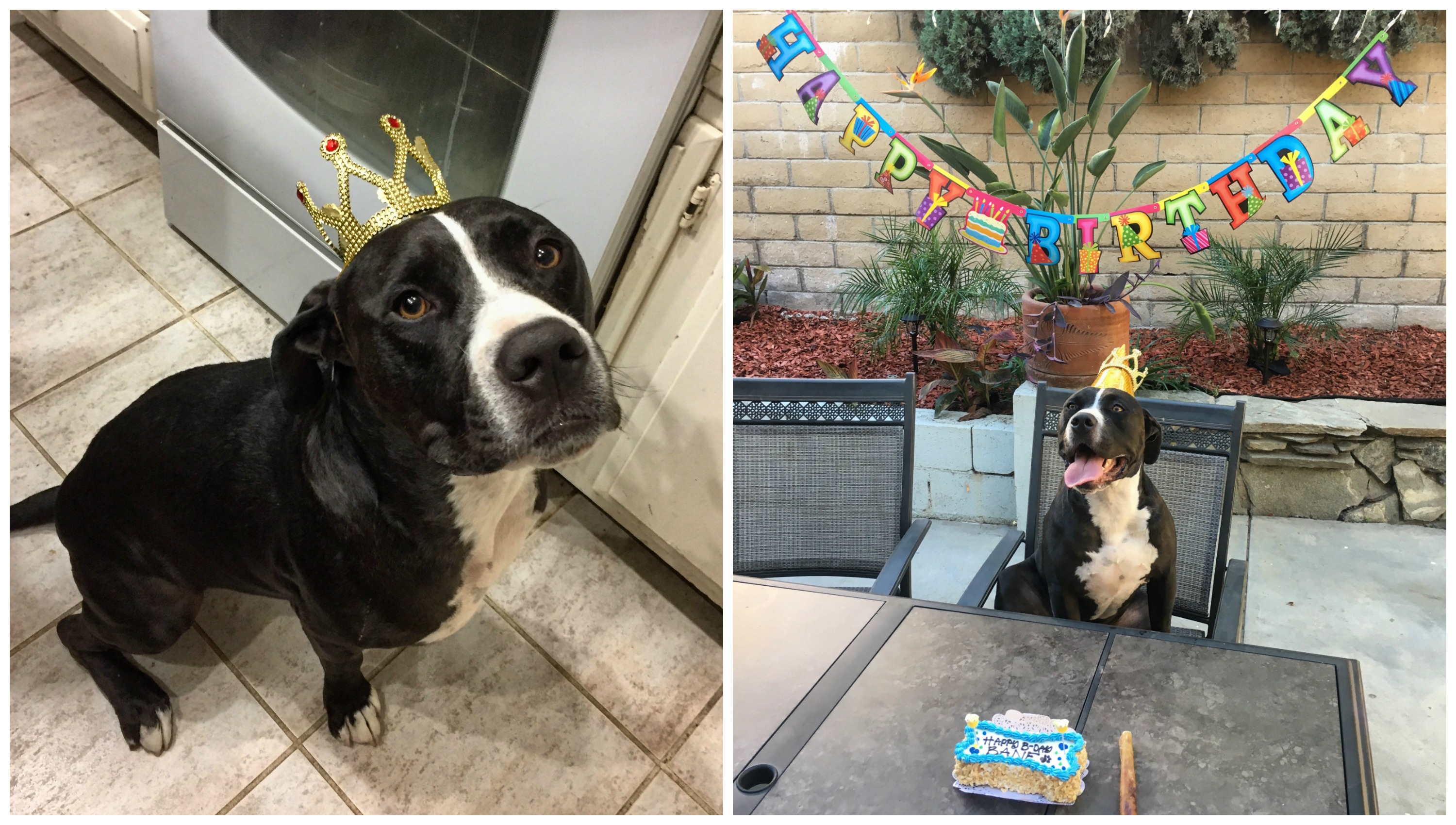 The first night Matthias was at home, Bane was so excited, jumping all over the place, trying to sneak a look at the new baby in the house. His parents made him wait a couple days before he could meet his little brother, so he could calm down. When Bane and Matthias did meet, it was love at first sight. It’s like he knew that was a six pound human, and that he had to be gentle with him. Bane’s parents invited him up onto their bed, and all he did was come and lay his head down right next to his new brother. Jessica cried, as she was so happy to see the immediate bond created between the two biggest loves of her life.

Since then, Bane has to be by Matthias’ side at all times. That’s his little human. If Jessica is changing Matthias’ diaper, Bane is laying next to him. If Jessica is feeding Matthias, Bane is there. If they’re tickling Matthias and making him crack up, Bane wants in on the fun. If he’s crying or upset, Bane makes sure Jessica is aware. He LOVES giving his little brother big, wet kisses to make him laugh. Matthias is only six months old, and doesn’t fully understand to be gentle and respect his fur brother, but his parents have already started to teach him, and Bane is beyond patient with him. 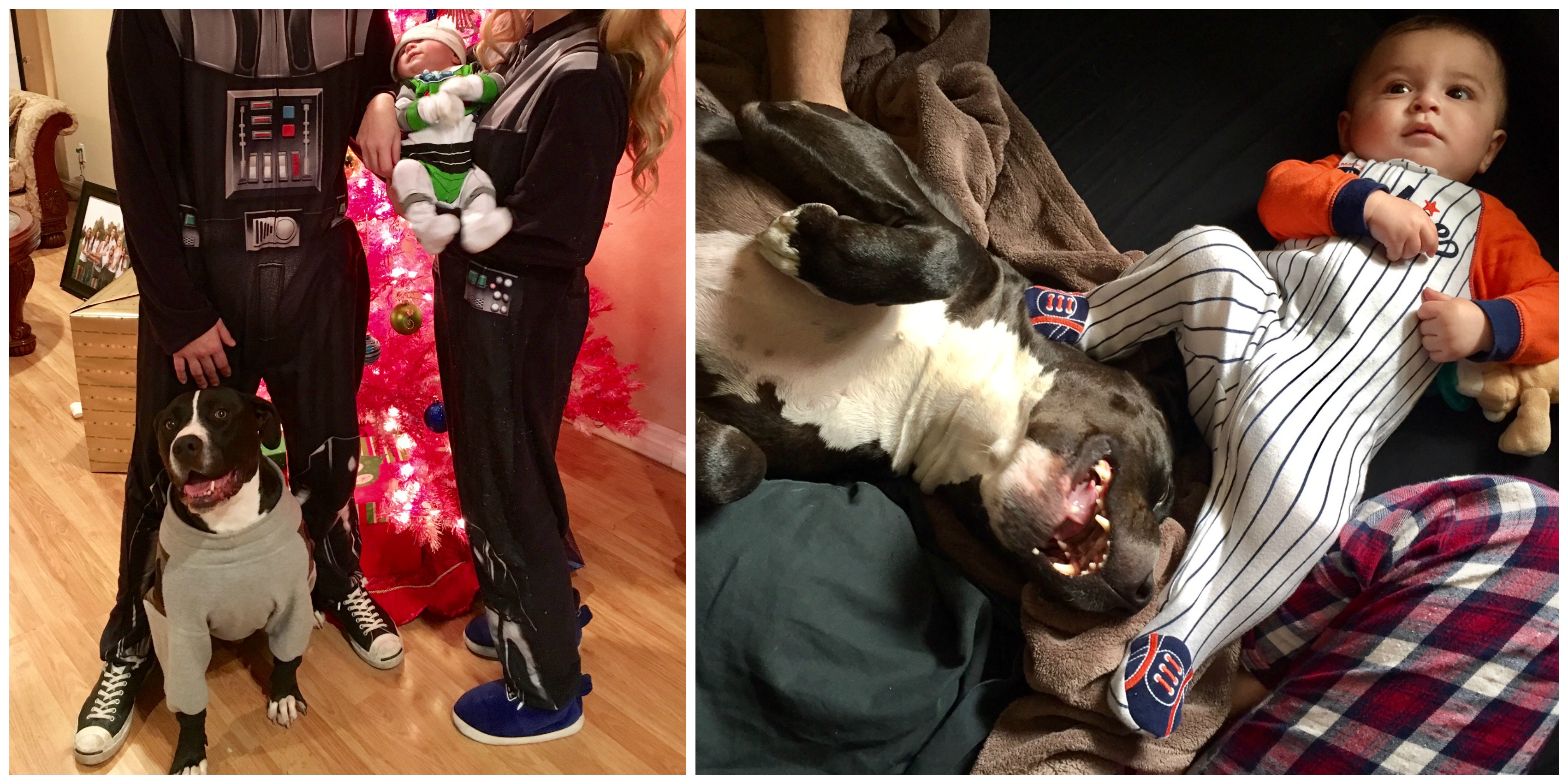 Bane and Matthias already have such a strong, loving bond and Jessica is excited to see them together every single day. Her life has changed for the better because of Bane. If it wasn’t for him, she wouldn’t be where she is now. He’s taught her so much about life, love, and she can’t picture her life without him. Bane is the start of something beautiful and she can’t wait for him to watch it unfold and grow old with his little brother.

We wanted to take a moment to pay our respects to all the fallen men woman and four legged soldiers who have put their lives on the line to give us a better life. We are the land of the brave and free because of you all. We salute you! 🇺🇸❤️💙

Here’s an awesome #tbt for yuh, this is what we call a Resting Pit face. Or as my mum likes to call it the I’m totally judging you face. 😂 idk what she’s talking about. This is my every day face! ¯\_( ˘͡ ˘̯)_/¯ @toothandhoney #restingpitfacecontest

#tbt to the very first #ThanksGiving with my little brudder! ☺ he was only 16 days old! 💙✨ Im so thankful for him and my family! 💙💙 Thank you to all our new friends! Don’t worry mommy is catching up! ☺💙💙

My dad said I’m Americas next top model, only cooler! 😎 I had a great time in the desert with my family! ✨

The look you give your brother when he try’s to blame his toots on you! 😂🙊 n he try’s to act like you’re crazy😝

#tbt to the day my mum told me I was #adopted say wuhhhhh?!?!

We love cuddles with our mommy! ☺💙