Let’s preface this article by saying that I have been a Carolyn Hennesy fan for… well… EVER. I have loved General Hospital from the time I was in high school. I’d run home and my sister, mother and I would be enthralled with the goings on in Port Charles. I love her as Diane Miller, a lawyer, on the soap opera. I have also loved watching her on Reba. Her books are great, fun reads. I kept my fan-girl squealing to a minimum during the interview, but danced around the room after having talked with her! I am hoping to meet Carolyn in real life when I am in LA in August for CatCon! ~ Crimeless Cat Senior Editor, Robbi Hess (READ THE INTERVIEW BELOW IMAGE) 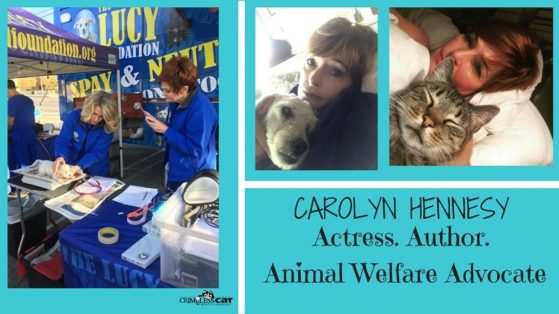 Carolyn Hennesy: Actress, author, animal welfare advocate. She is a woman who is driven, friendly, funny and an outspoken voice for animal welfare. “We are their 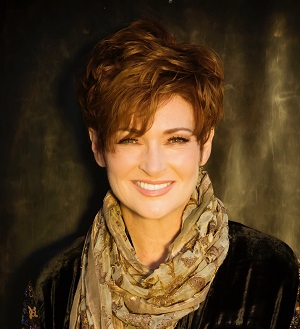 stewards,” she said in a recent phone interview before she jetted off to work on a film. “Animals can live quite easily without humans, but we cannot live without them. We just can’t.”

Because we can’t live without animals Carolyn looks at the real world problems that animals are facing and looks for real world solutions. “I am pro-spay and neuter.” Her stance on spaying and neutering led her to a meeting with Joey Herrick, founder of Lucy Pet Products and the Lucy Pet Foundation which operates a mobile spay and neuter clinic. “I interviewed Joey on my radio show, Animal Magnetism and our relationship grew from there. “

Carolyn shared with Joey one of the items on her “bucket list” was to be in the Rose Bowl Parade. She realized that dream when she rode on the Lucy Pet Foundation float in January.

A lifelong lover of all animals, Carolyn said she was introduced to her now-mentor Grey Stafford, director of the Wildlife World Zoo and Aquarium in Arizona. Stafford is one of the foremost marine mammal trainers and animal trainers in the world, she said. “We talked about what I could do to help. He got me involved in animal welfare and it heightened my perspective to realistic and practical ways to make a difference in the lives of animals – whether pets or in the wild.”

It’s important, she said to, “Take a big picture view and look to the future to look at the course of human and animal interaction and what the survival chances are for the human population if we don’t start taking care of the animals in our keeping. It’s extremely bleak.” That realization hit her more than a decade ago, “I have been a staunch animal advocate ever since.”

Four years ago, Carolyn worked on a documentary about elephants. “I came home with a heightened perspective and a terrible case of depression over what I saw in other countries… the conditions the humans and the animals live in is horrendous,” she shared. “It was truly a rude awakening and it was perspective-altering. If you don’t love this country you need travel and see how others live and then you need to get down on your knees every day and be thankful for living in America.”

“I came home and started my radio show. I felt I needed to channel my anger and depression into something positive,” she said. Her show has played host to everyone from Grey Stafford to Jack Hannah to Joey Herrick and soon to Larry Kay of Positively Woof. “The show covers topics relating to dog breeding, dog fighting, people who foster, fostering and adoption versus buying from a breeder and how to tackle perpetrators of animal cruelty.”

Rather than just “yelling at people and wanting their money,” Carolyn said there needs to be steps taken to actually accomplishing something and making a difference.

Carolyn and her pro-spay and neuter earned her a spot in the Lucy Pet Foundation Spay and Neuter bus recently. “I was on the bus with Doc (Karen) Halligan and will be assisting with the spay and neuter operation,” she said. “I want to shed a brighter spotlight on what the group is doing.” 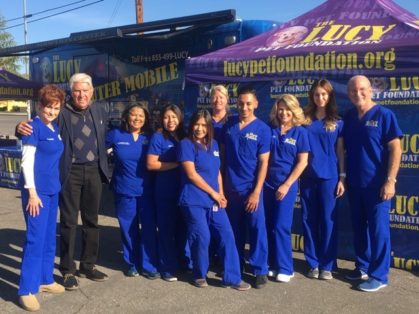 Like most responsible pet parents, Carolyn said she had her pets spayed and neutered. “This time, rather than waiting for the vet’s office to call and say my pet is ready to be taken home, I will be seeing what it is like for the veterinarian and vet techs and what they do to propel animal welfare forward.” Carolyn said that thankfully her three rescue dogs and rescue cats have never had to have any serious operations, other than their spay and neuter appointments.

Her “scrubbing up” and being on the spay and neuter bus came about when she was talking with Joey Herrick and Doc Halligan at the Rose Bowl Parade. “I said, ‘if there’s anything I can do to help…’ and from that they invited me to be on the bus – on the ground floor,” she said. “You have to walk the walk, not just talk about doing something.”

Carolyn gave kudos to Larry Kay and Positively Woof, “If you’re a reader of Positvely Woof, you are an intelligent being and you know that spaying and neutering and adopting should be mandatory.”

Through her work on her radio show, Animal Magnetism, Carolyn said she, “Gently but firmly suggests pet owners get their un-spayed and non-neutered pets taken care of. If they see an animal in distress, say something.” Being kind and understanding that some people in her audience might be unaware of what to do with an animal in distress makes her show a teaching tool. “In Southern California we have problems with bait dogs and dog fighting but we don’t have the cruel weather conditions that animals in other states might be faced with.”

Making sure your animals are warm and safe and dry and well-fed is key. “If you see animals that aren’t being taken care of, please say something. If you hear of an exotic animal in a home where it shouldn’t be, please say something.” She urges individuals to “do what they can, within the law.”

She believes, “If you see something, you are meant to see it and you are meant to act upon it,” she said. “You can’t feed, and warm and love everything on the planet, but you can take care of that which you see right in front of you.”

Carolyn, who shares her life with rescue dogs and cats, said, “Every animal life is important. Every creature has a soul and those souls need to be taken care of, nurtured and cherished.”

Trapeze artist, actress, author, hostess to actresses and producer, Carolyn is continually on the move. “Not everything hits at once, but I love everything I am involved in.”

Her most recent love was producing her first film product. A few weekends ago, she said, “I had the great joy of being a producer for a promotion for a series called Bleeding Hearts, written by James Kelton. It’s my first time being a producer. It was exciting!” 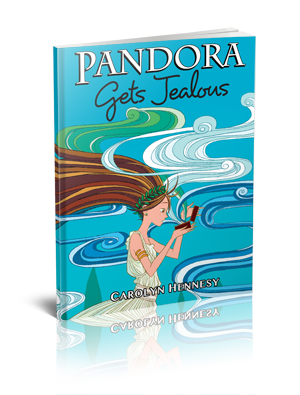 She met Kelton when they were classmates at the Royal Academy of Arts.

Her other love includes hosting an all-women’s play reading at her home. “We do a lot of gender bending because the group is only for women,” she said. “I host this because I have been very blessed in terms of the working opportunities I’ve had… not all actresses are. These women are talented and wonderful and I love having them show off their acting chops once a month at my home!”

“If you’re going to get a pet, please adopt. If you’re determined to have a specific breed, find a rescue that has that breed and adopt from there.”

“Love your animals and love your life!”