Tracy Grogan submitted his story about Belle, a Hurricane Katrina survivor cat, who blessed and changed his life. 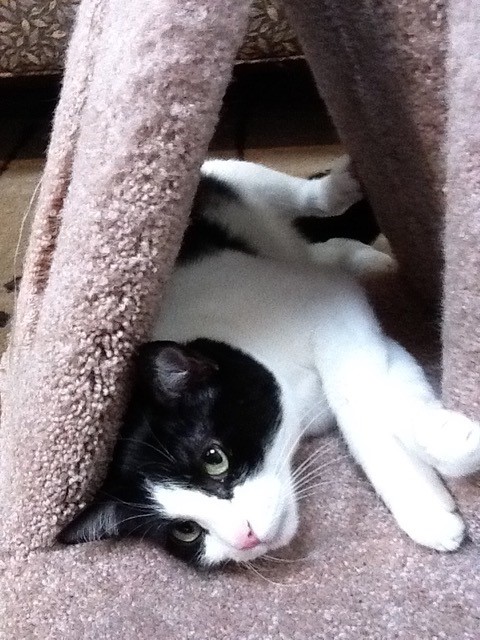 Belle was a Hurricane Katrina survivor.

Like so many, she was relocated to another state where more opportunities existed. Louisiana was rebuilding, neighborhoods were still devastated and jobs were few…  She arrived with many others at a local cat clinic in Ann Arbor.

We were very lucky to be chosen by Belle to be her guardians (there was quite a competition for her).  Like most of the others, her health was poor and it took three months of care before we could take her home. She spent the first two days hiding under a couch, but the next thirteen years in our arms, our bed, on any clothes (she knew which ones were the most expensive) we left out, or in one of her many heated cat beds.

She converted me, a dog person, into a cat lover. She never complained or retaliated for vacations taken (we always got her a cat/house sitter), or broke anything. For the past eighteen months, as her kidneys failed, we carried her downstairs once, and then twice a day, for fluid infusions. She knew what was in store when we picked her up and almost never complained as we slid in the needle. She never fought. She trusted that what we were doing was best for her.

When Belle’s weight begin to slip off, her limbs grew weak and her heart became enlarged. We knew it was time to do what was best.

Twelve years years and 363 days after she joined us, we made our last decision about what was best. It may have been earlier than necessary, but it was a good day with a nice nap in the sun, and we knew  there were few good days left. We made the tough decision to let her go. We owed that to her. She’d given us a lifetime of joy and trust, it was the least we could do in return.

We still cry for her, several months later. I wouldn’t have it any other way.

If a cat or kitten has changed your life, we’d love to hear your stoy.