Victoria Young shared the story of Mario, a beautiful cat who is around two-years-old.

“We rescued him (Mario) and his brother Luigi, a black and white cat, together to live on our small horse farm to take care of the mice! When they first came, they were both super shy, afraid and nervous. They wanted nothing to do with humans and the woman told us we were most likely never going to be able to pet them.”

It took about two months, but eventually the cats le Victoria touch them. She kept them in a large crate to keep them safe and to help them acclimate to their new home and to her and her touch. “We released them and let them roam the stable and pastures with our two horses,” she wrote.

In July she came back after a short vacation and Luigi was no where to be found. “The cats would both 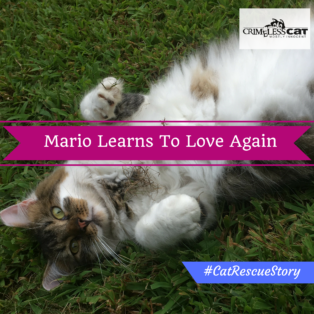 come running for dinner every night, but Luigi didn’t show up. I was so worried, but there was nothing I can do.” She described him as an adventurer.

After Luigi got lost, Mario was lonely, she wrote. “He would stay in the barn all day, just hanging around. I felt so bad for him. Slowly but surely, each day I would sit by him, talk to him and offer my hand for pets. It took a lot of time, but he became so close and was always waiting for me to pet him! Now he rubs on my legs and shoes and he stands right in front of me to demand love!!”

Victoria said that Mario is, “a bright, happy boy again chasing grasshoppers and watching me do barn chores!! He always stays within the property, meets me for dinner time and meows at me! Now he even follows me when I call him!”

She says she, “Hopes our bond continues to grow. I’m so glad we have him! He enjoys his life so much now compared to where he began on the streets of Bridgeport, CT. Mario is a happy cat now living the life!”

We are so happy that Mario found a home to call his own with a pet parent who loves him!