Veronica shared her Cat Rescue Story with us recently.  “It started with a drive through the mountains in New Mexico. My aunt and cousin were on a scenic drive through the mountains when they crossed a cattle guard. My aunt chanced a look back and spotted a head poke out from under the cattle guard. So they turned around to go see what it was and found four kittens had been dumped.”

They couldn’t leave them there to die and decided to bring them home and see if the local shelter would take them. My aunt set them up in her back yard with a bed, food and water until she could contact the shelter on Monday, that is until she had a better idea. 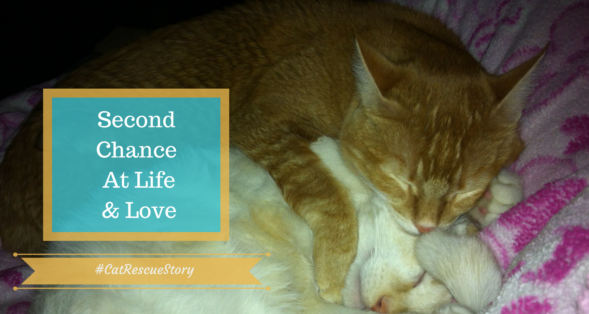 “That’s when my phone rang and the story of the how she found four kittens was passed onto me,” Veronica wrote. “She ended her story with ‘you need to come see them before I have animal humane come get them.’ I told her I would come over the next day to see the poor babies someone so cruelly dumped in the mountains.”

The next day Ceronica went over to see them and when I arrived my aunt told me one was lost. “It got out through the fence and she couldn’t find it anywhere.” That left three kittens. “An orange runt, a white one with orange ears and nose and the bluest eyes I’ve ever seen and a grey and white kitten.”

My aunt knew exactly what she was doing when she called me, Veronica wrote because she said the second she saw them, “I changed their lives and they changed mine.” I said, “I’ll take them.” From that moment I became a cat mom.

At first it wasn’t easy

The grey and white one was easy, she said. He was very friendly and just wanted to be held and cuddled. The orange runt, a female, was okay with human touch but only for short periods of time. The white one, a male, was skittish and didn’t want any contact by humans at all. “The only way my aunt managed to catch him to begin with was because he was too small to jump out of the cattle grate,” Veronica said.

I took them home that day and worked for days to get the white one used to being touched. “I would just pick him up, lay him on my lap and rub his little belly. It wasn’t long until he became addicted to belly rubs and would demand them all the time. Now it was time to give them names.”

The grey and white who was a lovey little cuddler and a foodie earned the name Tubby Kitty. The white one who turned out to be a flame point got the name, Sammy. “It was the only name that I could come up with that seemed to fit him,” she said. “The little orange runt who only liked to be held for a minute, played with for a minute, petted for a minute ended up being called, you guessed it, Minute!”

After all was said an done I gave Tubby Kitty to my mom because it was love at first sight. I kept Sammy and Minute and seven years later they are the best thing to happen to me. Minute still only wants attention for a minute and Sammy lives his belly rubs. As for Tubby Kitty, unfortunately he had to be rehomed, but we made sure his new home was going to be a great one before we let him go. The last I heard was that he was very loved and loved his new family.

And that, Veronica says, “is the story of how I acquired my two babies who I couldn’t live without.”

If you have a Cat Rescue Story, we’d love to hear it and share it! Click here.