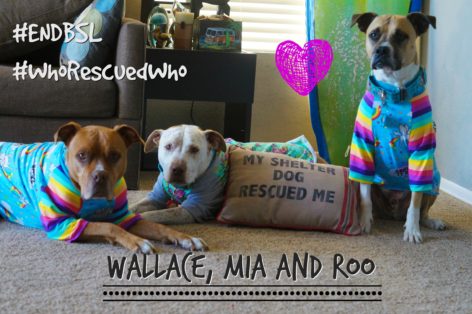 Wallace came in to Tara’s life at a time before she knew rescue, before she knew Pitbulls, and before she knew her purpose.  She’s always loved animals and was about to move out of her tiny apartment and into a house. She knew getting a dog would be her first priority.  Tara saw a picture of a puppy posted on Craigslist with a very strange story.  The puppy (known as Rusty) was supposedly the last one left after an “accidental” litter. The mom was purebred Yellow Lab and the dad’s breed was unknown.  Something intrigued Tara and she went to see Rusty. During the visit, he was being awkwardly and painfully dragged around by a small child, yet he never made a noise. Being good with kids was important to Tara, so even though she had no connection with Rusty, she paid $180 for the unvaccinated, unaltered mutt. Tara’s friend had come along with her and was able to convince her that Rusty was the right dog.  Tara also believes she decided to take Rusty home because she was previously trying to adopt a female dog out of Arizona Animal Welfare League, but the dog was euthanized because of a bad URI. Tara had never even met the dog, but she had become emotionally invested and was 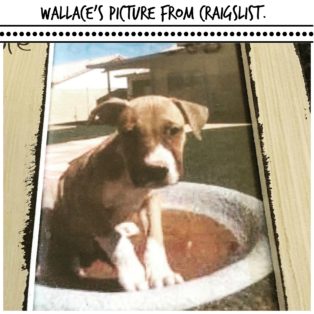 still reeling from the fact that she was put to sleep. Tara and Rusty then headed to Petsmart. She had a kennel, food, bed, and toys in her shopping cart, ready to check out, when a volunteer from Halo stopped her to admire Rusty. The volunteer immediately grew concerned. Rusty’s belly looked bloated and he had pustules all over his undercarriage. Tara rushed him over to the vet where they failed to diagnose him and gave him a grim survival prognosis. Due to her emotions and naivete, Tara left the vet with Rusty, and with $1000 less in her bank account.

Tara renamed Rusty ‘Wallace’. He got better! He became her first dog, and her love for him led to many, many more. Five months after buying Wallace, she found out what fostering was. She quickly learned the reality of rescues, shelters, and Breed Specific Legislation (BSL). People said Wallace looked like a Pitbull. She always told them he must be a Boxer/Lab mix, but DNA tests proved him to be a Pitbull/Boxer mix. Tara started her crusades against BSL and Pitbull hate. Wallace inspired her to paint dogs which led to 100k in donations raised for animal welfare. Wally may not be a rescue dog, but he surely is a rescuer. 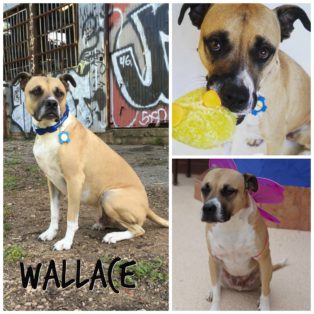 Wallace ignited Tara’s love and passion for rescue.  He set her on a path that would lead her to her first foster dog, just over three years ago, and she knew her life had changed forever. After Wallace came in to her life, she cared for, trained, and re-homed 22 dogs over 3 years.  She and Wallace were educating people and changing peoples’ minds about Pitbulls, the breed she most often fostered.  She cared for dogs with severe health problems and they all lived. She took in dogs with behavioral problems, and they all made great progress, allowing them to be placed into loving homes.  It was the first time in Tara’s life that she had felt she truly accomplished something.

But, not all things in rescue are “rainbows and butterflies,” as someone once said to her. Her ‘winning’ streak eventually came to an end and everything came crashing down when she lost her 23rd foster.  This particular foster and Tara had spent nearly an entire year together, and his loss was crippling.  She had been flying so high that the fall felt far too much to bear.  For her, the days seemed so long, and the nights even longer.  She thought she might quit, but as time went by, Tara realized how empty her life was.  Previously, she would spend entire days training dogs, prepping them for photo shoots and most importantly, showering them with love.  Even with Wallace by her side, she felt incomplete. 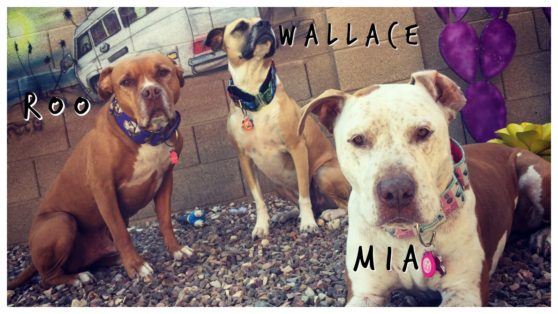 It was just before Christmas when a wish was broadcasted by a fellow rescuer, whom she had never met.  It included a short slide-show of a bonded-pair of senior dogs who had been stuck at a shelter for nearly six months.  They were deteriorating there, and the hopes of them being adopted were deteriorating, too.  The wish was for them to be in a home for Christmas.  Tara likes granting wishes, so she pulled them out of the shelter with intentions of fostering until they found a home together.  She named them Mia (Mimi) and Ruger (Roo).

After a day or two with Mia and Roo, Tara started seeing some very strange things happen in her house.  By taking on some of the tougher behavioral cases, Tara was not the only one effected by the trials and tribulations of rescue – Wallace was, too.  He had grown a bit weary of other dogs and was not so carefree and welcoming as he once was.  He would canvas their house slowly and cautiously, being careful not to stir up their visitor dogs.  Tara’s husband had become a dog training and exercising machine (machine in the sense that he was devoid of emotion).  He took great care of the dogs, but he never got attached…not even a little bit.  So, Tara was surprised when she walked into a room and found her husband curled up on a dog bed with their two new fosters.  She was also surprised when she caught Wally doing “zoomies” across the house, then snuggling up with his new pals for a nap.  Within a week, Tara knew Mia and Roo had come to them for a reason.  Tara, Wallace, and her husband needed to heal.  They were each struggling in their own way, and what Mia and Roo brought to their home was nothing short of a miracle. 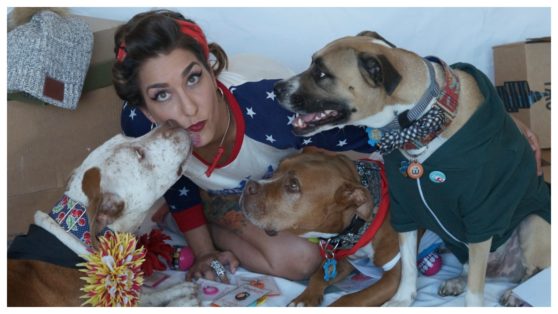 Mia and Roo’s rescue story isn’t one of abuse or neglect.  They were owner surrenders and were well taken care of before Tara saved them from the shelter.  They were not scarred and they were not broken.  They knew what love was and they knew how to give it back.  Mia and Roo’s rescue story is more a story of how they rescued Tara, her husband, and Wallace, and how all three of them were given a second chance.  Six months since joining Tara’s family, Mia and Roo have become foster brothers and sisters themselves. Tara thanks them everyday for saving her and her family, and she expects they’ll go on to save many more by being welcoming hosts to other dogs in need.

And those dogs will go on to change the lives of the humans that give them homes; and so the circle of rescue will continue… Who rescued who?

>>Tara continures to fundraise through her paintings.  See them on Facebook for Pawsitive Art

>>Tara also knows that good photos can be they key to getting a dog adopted, so she donates her time by taking photos of rescue dogs. Learn more on her Facebook Page for Picture Me Rescued