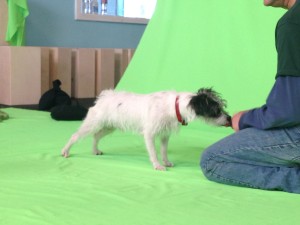 SCRUFFY “dares” to take a treat from Larry. (Photo by Todd Mathus) 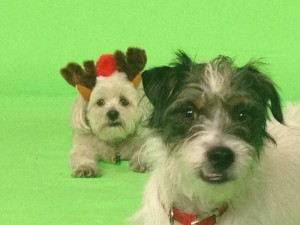 I was reduced to tears by a little dog I had just met. See more photos and a video below.

This week (December 8) our P.Woof team filmed a little Christmas card web video to share with you (when I finish editing it by December 21). We’ve been filming shelter dogs at Pet Orphans to star in the Christmas video. We had time to film one more dog in the studio we set up on the Pet Orphans campus. I couldn’t resist choosing a timid little terrier mix whose name suits his looks: Scruffy.

From the moment my colleague, Jone Bouman, and I started to gently acclimate Scruffy, it was clear that the little guy had known a life of homelessness, abuse, or challenges in his previous shelter before Pet Orphans gave him shelter. He had no previous training except that he had learned to fear everything: Scruffy was afraid of every movement and sound. Fortunately, his fear reaction didn’t include biting (as is the case with many fearful dogs).

So we shut off the cameras and played gently with Scruffy. Jone brought her dog Twigden to try and help Scruffy. Twig is a former rescue dog, small, and enjoys little dogs. Twig helped take Scruffy’s mind off us humans.

The quiet studio felt reverential. That’s when Jone reminded us of words I had spoken to the crew before cameras rolled: Even though this Christmas video might introduce a dog to his future Forever Home, more important than this film is that each dog have a wonderful experience socializing and training right now. When Jone said that, I began to cry. Tears of joy.

Scruffy reminded me of my mission: the single biggest reason that shelter dogs don’t get adopted is training. Simple, positive training. Our first job is to train and socialize these wonderful dogs. Our second job is to make these little web films that show the world how awesome shelter dogs. We’re calling the series of webisodes Dog Rescue Stars and our goal is to celebrate shelter dogs so that more of them get great forever homes with Good Humans.

By the way, Scruffy got so comfortable that he makes a brief appearance in an upcoming Dog Rescue Stars webisode.

I hope you’ll support our efforts (and help these dogs get their deserved loving homes) by sharing these little films. Here’s our first video with Charlie a pit bull mix and a real sweetheart!

Here is another Dog Rescue Star. Tammy is ready for her Forever Home (and her close-up). Meet her and other great dogs at Pet Orphans of Southern California. 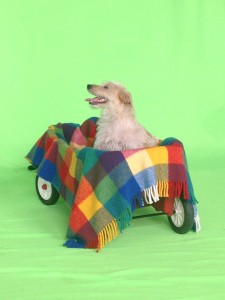 TAMMY is ready for her close-up with Dog Rescue Stars at PetOrphans.org (photo by Melanie DiPietro)