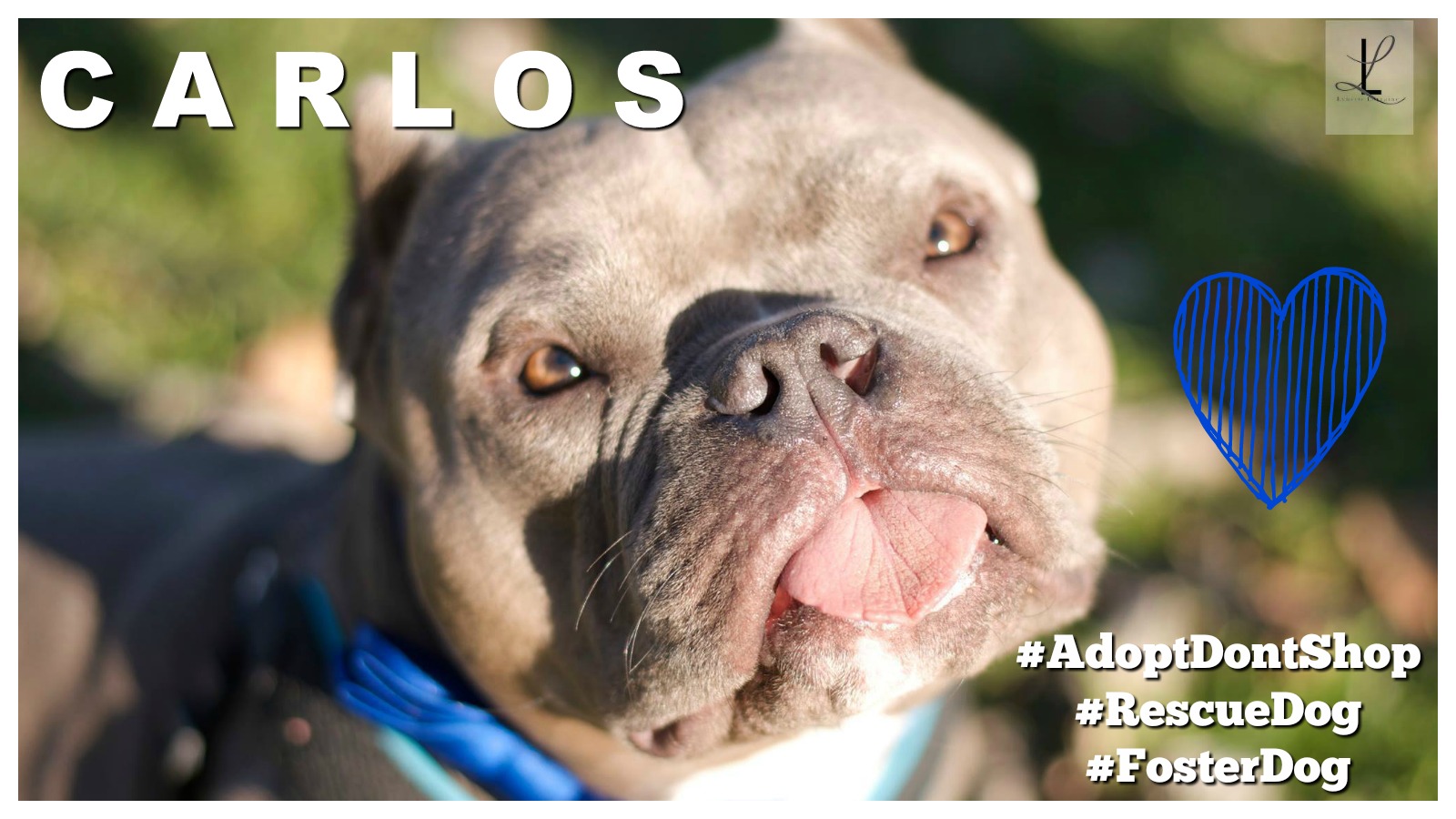 Carlos, at around 2 years of age, was found in February of 2015, wandering the streets of suburbia. He was a little rough around the edges, but was also suffering from a severely prolapsed rectum. Fortunately for Carlos, the responding animal control officers took him to a veterinary clinic for treatment. When he was sedated for repair of his prolapse, it was discovered that he also suffered from a massive cleft palate.  Many dogs born with cleft palate, especially the size of Carlos’, are fated to aspirate their food, get pneumonia, and ultimately succumb. Carlos was a miracle. His cleft measured around 2×4 inches at it’s widest points. 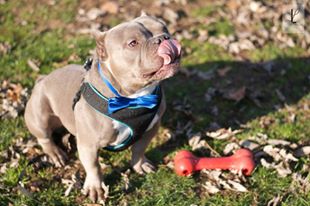 After spending close to a month at the vet clinic, Nor Cal Bully Breed Rescue, a 501(c)(3) non profit learned of Carlos and promised to pull him once a foster was secured. Lesley was that foster. Days after coming home, the shelter called to inform Lesley and her family that Carlos had also tested heartworm positive. Somehow, that information had gotten lost along the way. 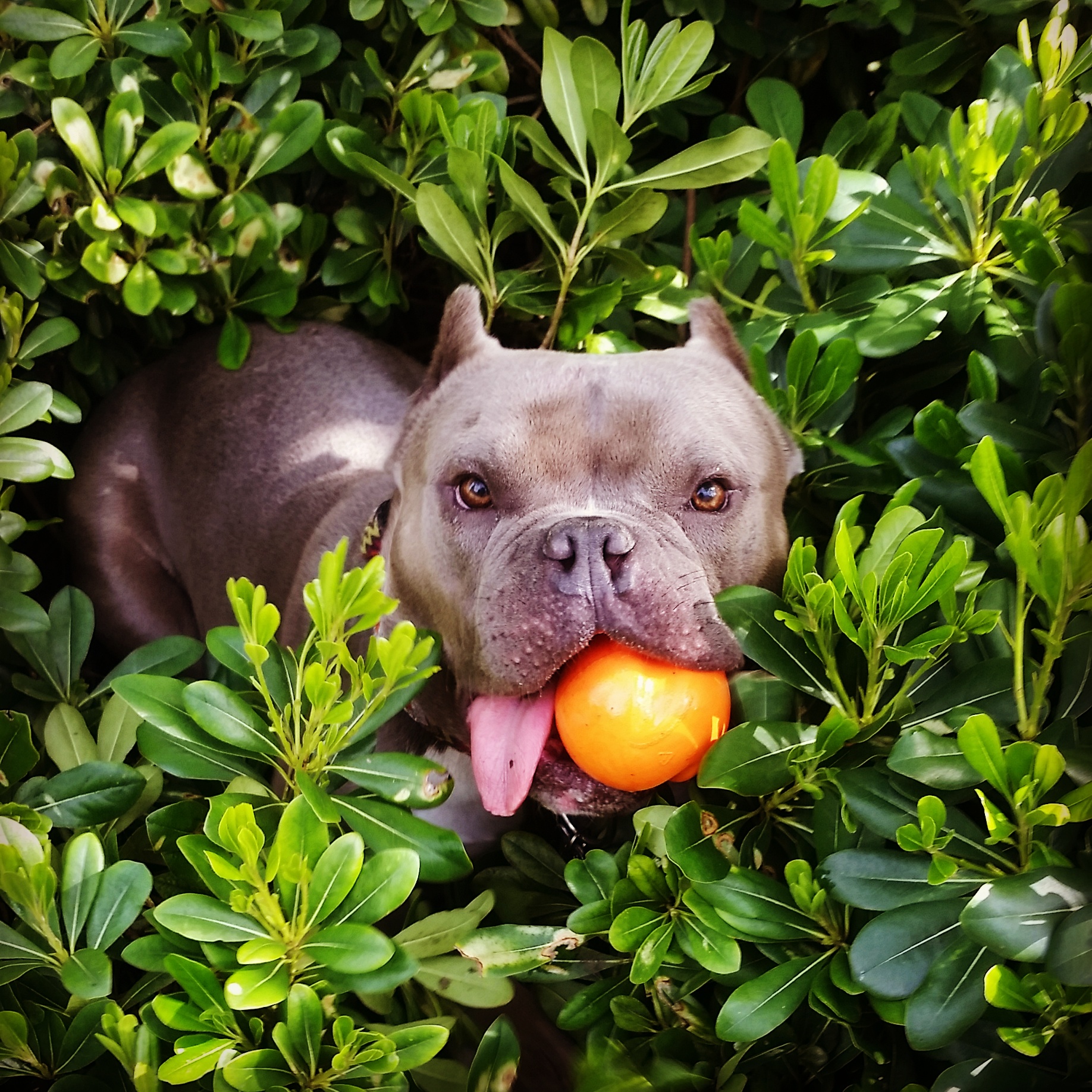 In the early days, Carlos’ foster family came to realize several things about him. First, he was lethargic. Some would call him lazy, but it didn’t make sense for a dog of his age. He was inappetent. Over the course of the day he may not even finish his first meal. Eating was a chore. And what he did get down, would often return as whole kibbles out of his nose, covered in thick green mucus. He also walked strangely, as if his two rear legs were wooden stilts.  Ultimately Carlos was assessed to have the following problems:

*Heartworm positive- deadly if left unchecked, yet painful and potentially dangerous to treat 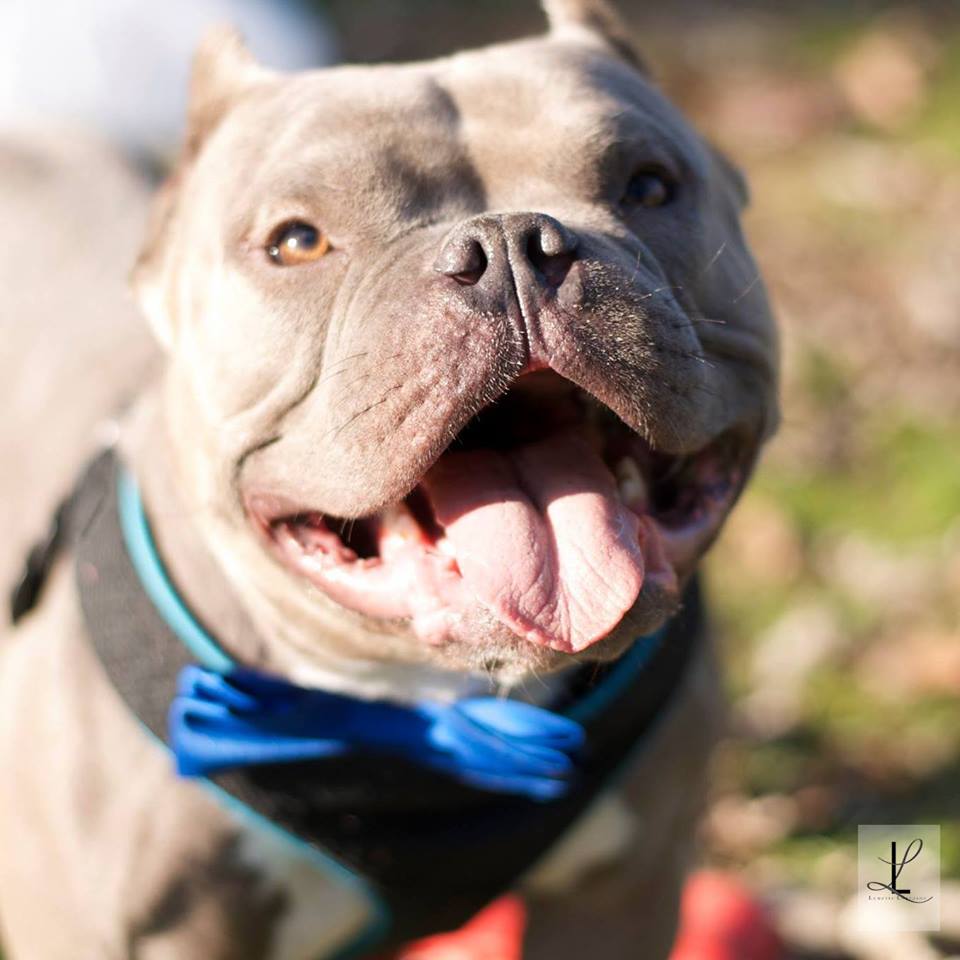 Today, Carlos is heartworm free. He has had two cleft palate surgeries. He still has holes in the roof of his mouth, but he is asymptomatic- he has heaps of energy, no productive sneezes, and eagerly awaits each meal! His rectal prolapse has been resolved with a prescription diet and surgical prophylaxis. His knees have not been surgically repaired. He may need surgery to improve his mobility in the future, but for now he does great! Carlos was of course, neutered as well. 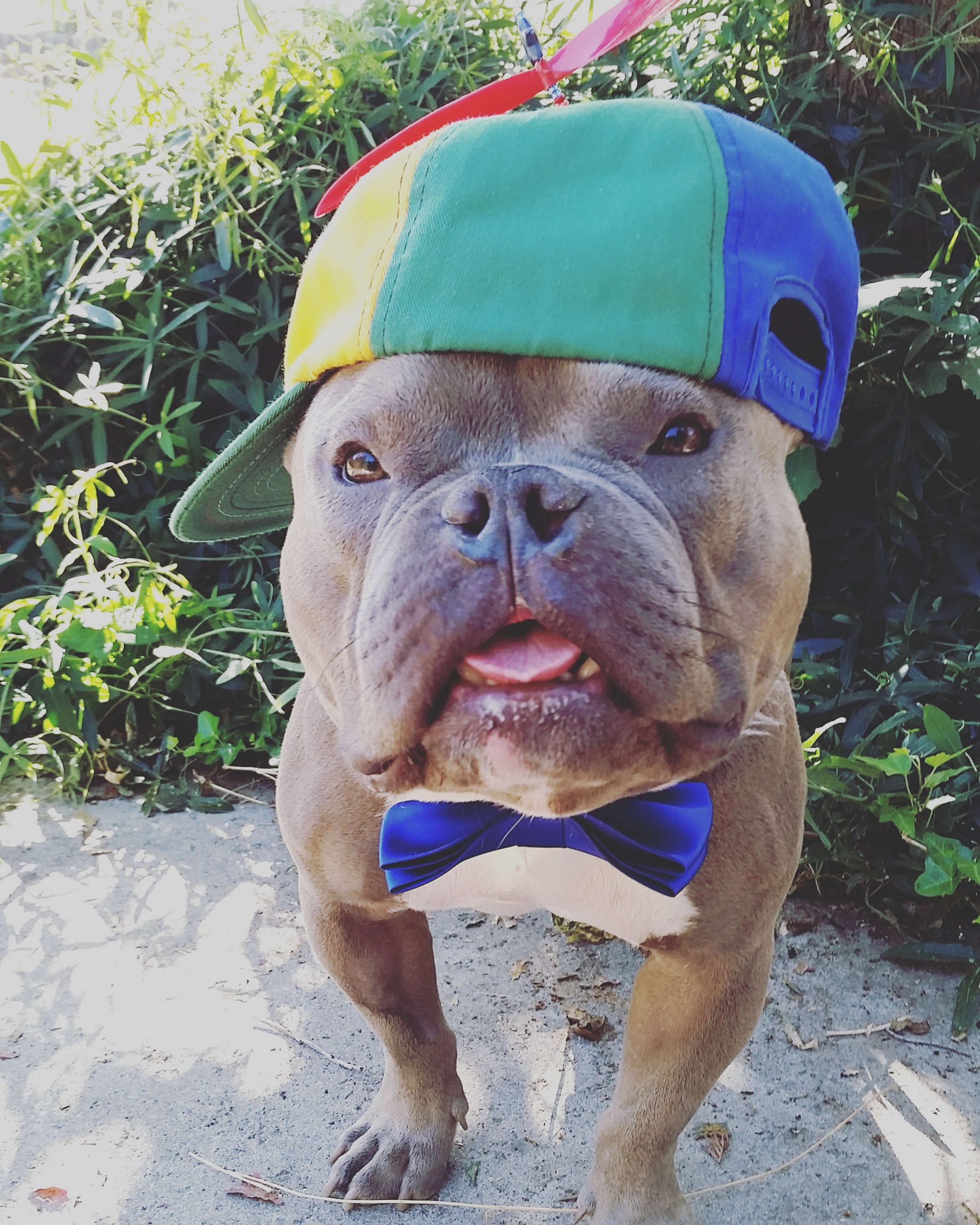 It took 12 months to get Carlos to where he is now. His greatest challenge along the way was his cleft palate surgeries. There was a high likelihood of surgical complications, and a chance that he might not survive recovery. He had a feeding tube in place for weeks at a time to increase his chance for success. Through it all, he never complained. 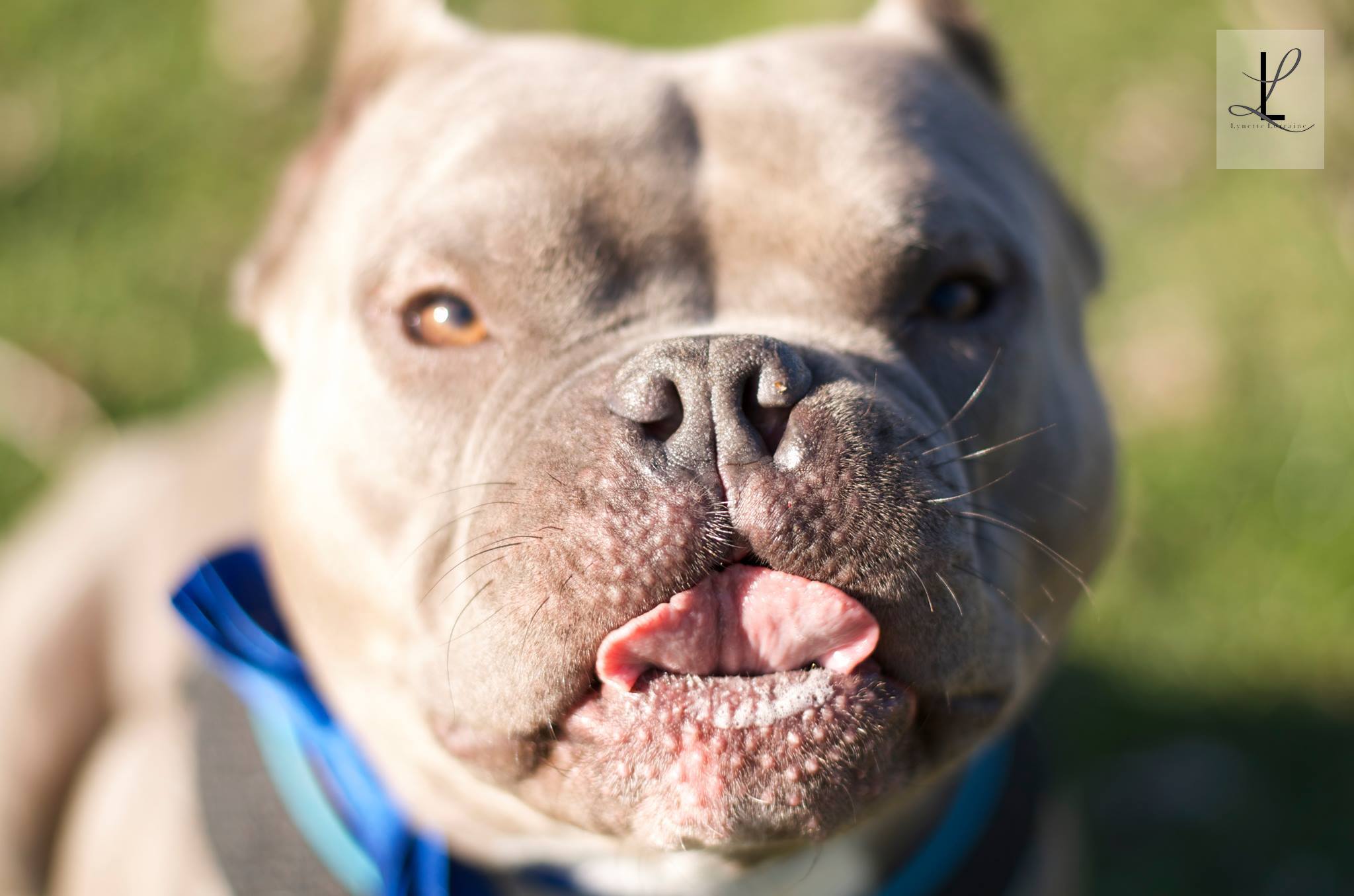 Carlos is a symptom of a movement in the bully community towards what are known as micro bullies, shorty bulls, and exotics. Essentially, a big dog in a tiny package. Everywhere Carlos goes, Lesley is stopped. What is he? Where can I get one? How much? Carlos has been genetically tested, and came back as 100% American Staffordshire Terrier. Measuring 14 inches at the shoulder and around 37 lbs with a short curly tail, he looks nothing like one. Was the test wrong, or was someone trying to reinvent the wheel? Are all of his medical faults symptoms of reckless breeding? As much as everyone loves Carlos, Lesley discourages them from seeking dogs like him out from breeders. If they must have a Carlos, look at a shelter. They are there, and coming in droves. 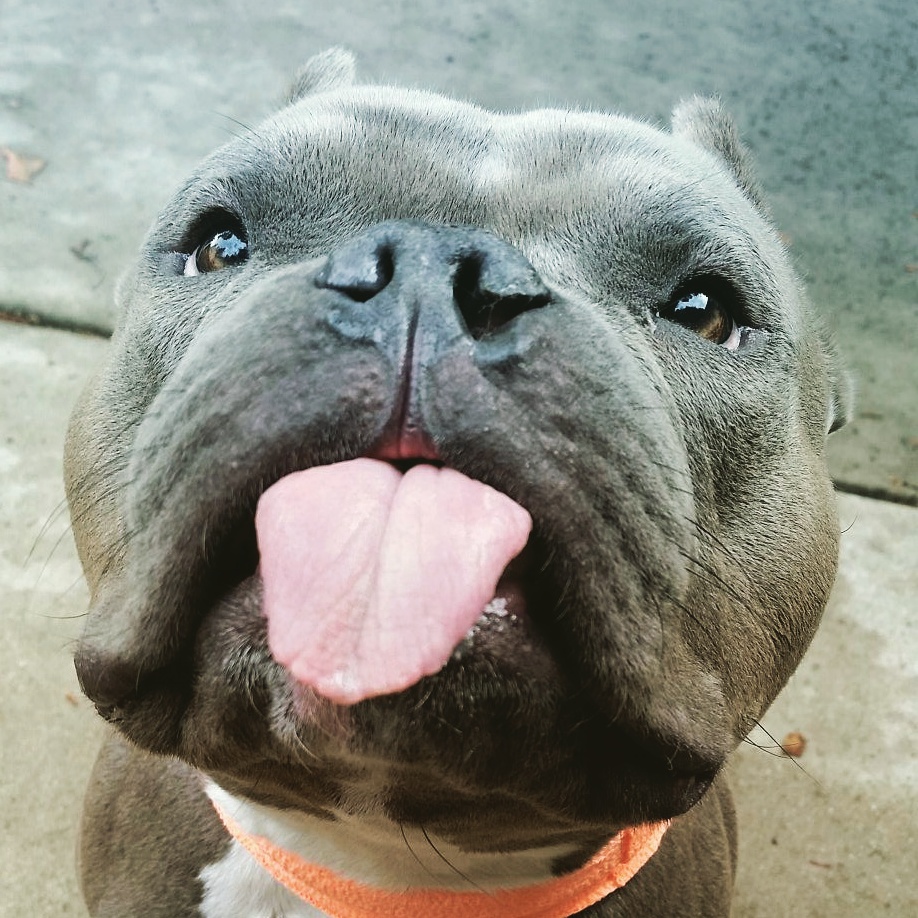 Carlos spends his time these days living a charmed life. Outings with his foster family to NorCal Bully Breed Rescue events are one of his favorite activities. He loves everyone and is terrific with both dogs and cats. Despite all he’s been through, he will always be a special needs dog. Once in a great while, he gets a kibble or treat lodged in what remains of his cleft palate. This leads to him collapsing on the floor, not breathing. He always overcomes this event quickly, but it is nevertheless risky and dramatic. His cleft also creates limitations on his activity level. Too much activity or heat leads to extreme irritation of the area, and then weeks of coughing or a day of exhaustion. Overall, he is a happy, go lucky dog, and his foster family couldn’t be more pleased to have helped him reach such a highly functional, joyful life! 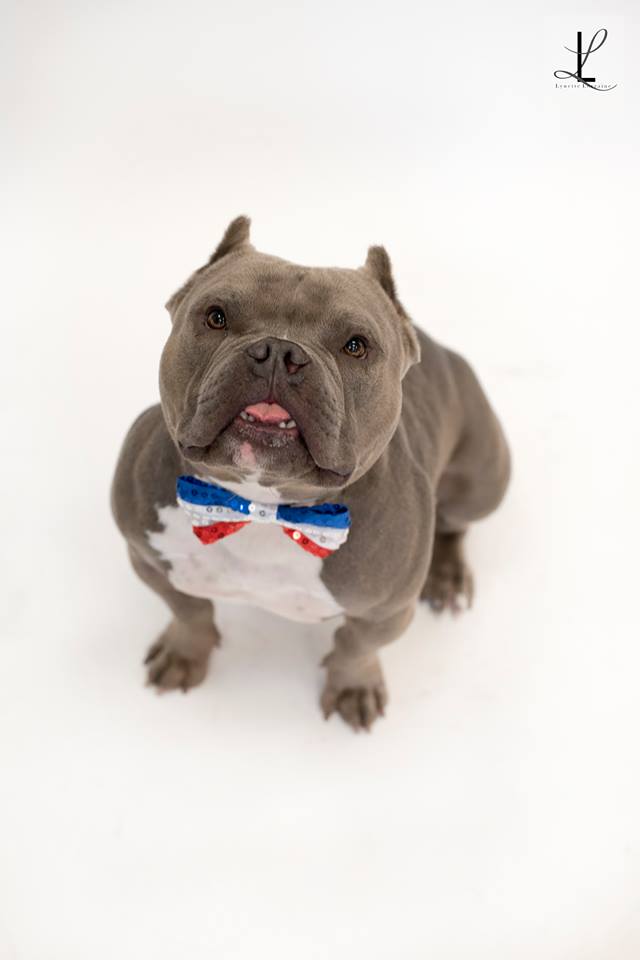 Carlos can’t get enough of Lucky’s minty fresh breath, ???? and neither can we since Carlos is still exhaling skunk fumes! ???? #dogsofinstagram #shelterdogs #savealife #norcalbullybreedrescue #teamcarlos

Carlos is feeling good about the upcoming 4th of July…he knows he’s rocking current identification tags and microchip (plus he’ll be inside!) Are your pets missing ID? In a pinch write your number in sharpie on the collar (or masking tape placed on the collar). The week of the 4th is when shelters are at peak capacity due to pets frightened by fireworks. ???? Please don’t let yours be one of them! Featuring the photography talent of @lynettelorrainephotography #dogsofinstagram #whogivesapit #shortybull #adorabull #huffpostgram #buzzfeedanimals #norcalbullybreedrescue #teamcarlos

Carlos can’t wait to go to @norcalbullybreedrescue’s photo event tomorrow! The event runs from 10-3 at Pet Food Express in Roseville, and Carlos will be in attendance from 10 till 12:30. Be sure to check out NBBR’s page for details! ???????? #smile #instafamous #buzzfeedanimals #shortybull #bulliesofinstagram #pitbulladvocate #norcalbullybreedrescue #teamcarlos

Carlos was feeling a bit under the weather this morning so he took a trip to the vet’s office. Turns out he just needed some pampering and a minor tune up on his business end. Life’s hiccups should always be so easy! #feelinggood #amstaff #bulliesofinstagram #spayandneuter #norcalbullybreedrescue #teamcarlos

Unexpected wet weather has led to a reduction of this house hippo’s outdoor foraging. He is currently raging with unparalleled sassiness, delighted to be outside and dry footed. #pitbulladvocate #bullbreedsofinsta #shortybull #showusyourpits #dogsofinstagram #norcalbullybreedrescue #teamcarlos

As Carlos’ cleft palate continues to heal, we are hearing some unusual sounds. An errant squeak when he yawns, an occasional woof. These are strange times in the Casanova house! #cleftpalate #survivor #bullbreedsofinsta #dogsofsacramento #dogsofinstagram #petsofinstagram #adoptdontshop #americanstaffordshireterrier #dontbullymybreed #picoftheday #norcalbullybreedrescue #teamcarlos