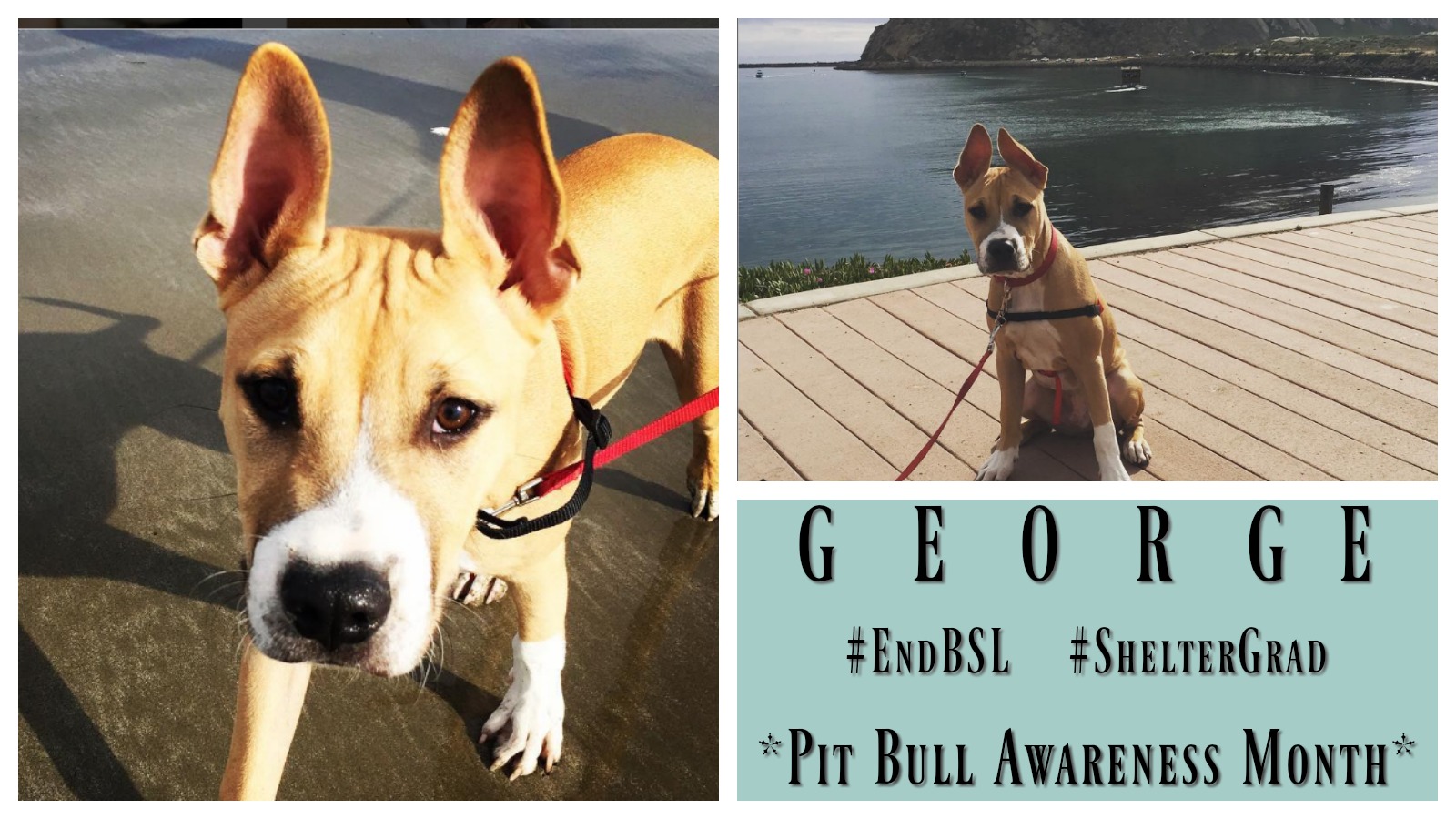 George is a pit bull mix, and was born on Thanksgiving to a mom who was dumped at City of Bakersfield shelter in California. He was one of nine pups.

Chelsea and her boyfriend had wanted a dog for a long time, and thought they had found the perfect pooch at a rescue. They were waiting on the final decision by the organization when they decided to visit some of Los Angeles shelters. They immediately realized that they needed to adopt a pit bull that was most at risk.  George’s pawrents put their names down for a few pit bulls which were on holds, as their owners were in jail.

To celebrate Chelsea’s boyfriend’s birthday, they drove to shelters outside of Los Angeles, as he hates celebrating his birthday, and Chelsea loves road trips. As they drove, pictures of pups that looked like little hamsters appeared on the Bakersfield shelter website.  George’s parents then drove three hours to the Bakersfield, arriving just half an hour before the shelter closed.

When you look this good ain’t no filter needed

The pups they saw in the photos were no longer hamsters, but crazy, big, fat puppies that were full of energy!  George ran straight over to his forever dad, and his all-white brother ran to his forever mom. It was George’s sad eyes that really got to his pawrents. He seemed to be pleading to get out of the shelter. Unfortunately, he could not leave for his forever home that day, as he still had to get neutered. Chelsea cried as she put him back.

George’s parents were told that he was a Mastiff / Pit Bull mix, and they knew they were in for a wild ride!  However, once George (named as his face wrinkles and rolls made him look so serious, like an older human man would be) got settled and happy, his ears suddenly popped up. At first one went up, then the other, and now they won’t stop growing! While his ears keep getting bigger by the day, George doesn’t. He may be part pygmy Mastiff, or as his parents call him, a Pit X mystery mutt.

Someone get me a pumpkin spice latte!!!

George, aka the little pocket rocket of love, has changed his pawrents lives more than he will ever know, with his happy little face and love of adventure pushing them to explore California (and even Mexico!) with him.

Grandma got me a new jacket. I’m not sure I’m a fashion guy?

I’m such a good boy. I thought I’d help Mom unpack while she’s at work. She’s so stoked and can’t believe I did this for her, she keeps yells “Why?!”

Is it the weekend yet?

Just checking the surf on my Mexican road trip

Is it the weekend yet?

Today was a BIG day. I got a BIG bath at the groomers for the first time. I got a BIG boy’s bed. And I got a very BIG bone to celebrate.