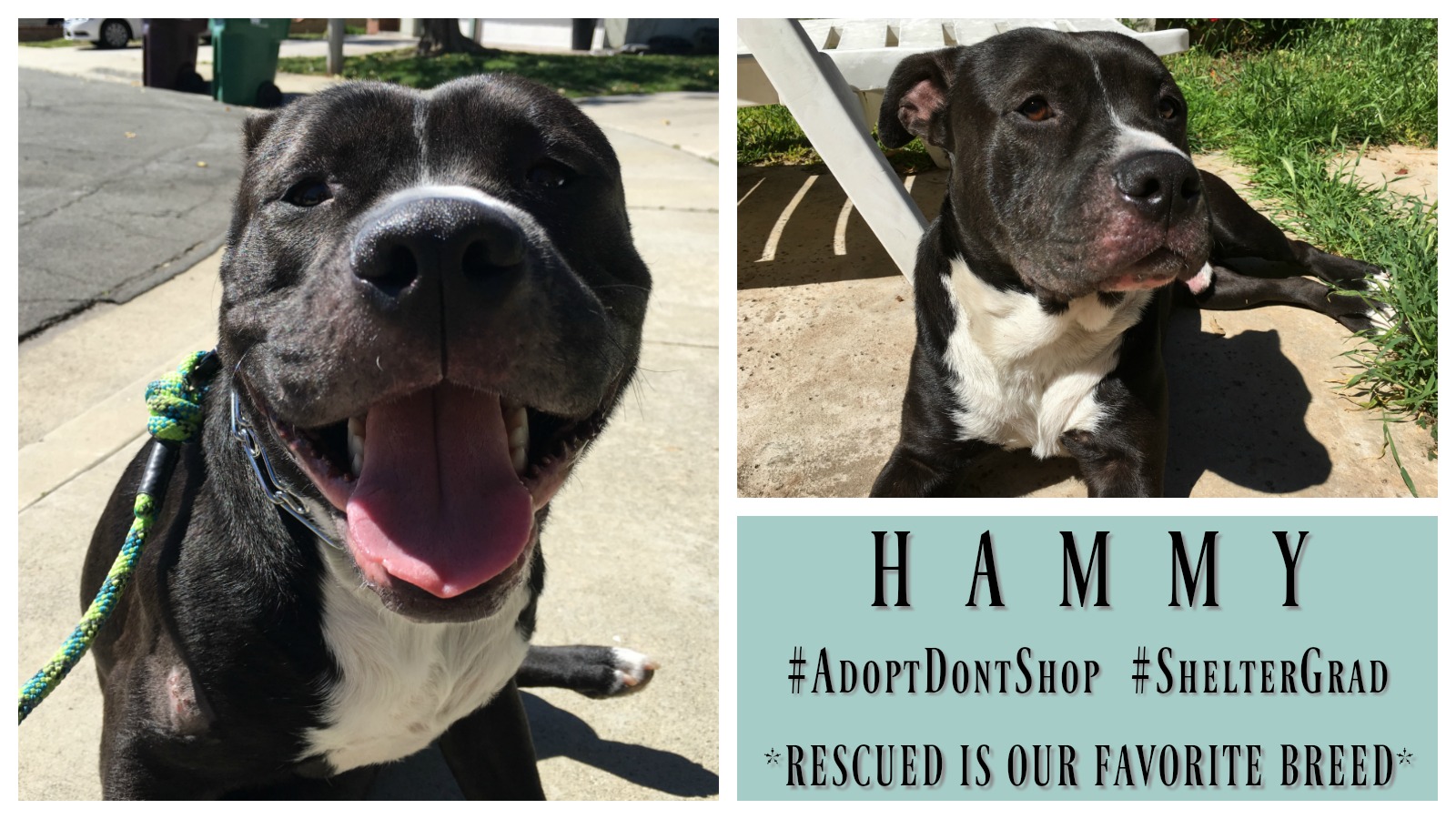 This is Hammy! He is the smartest, sweetest pibble mix you’ll ever meet!

Before we get to Hammy’s adoption ‘tail’, you’ll need to know Ziggy (a brindle shepherd mix). Ziggy was Eleanor’s Christmas present for 2016. All she had wanted was to rescue a shelter dog. It all started by following dog accounts on Instagram, and then before she knew it, she was learning about rescues, adoptions, dog fighting, and speaking up for all of the sweet pups out there with no home and no love. 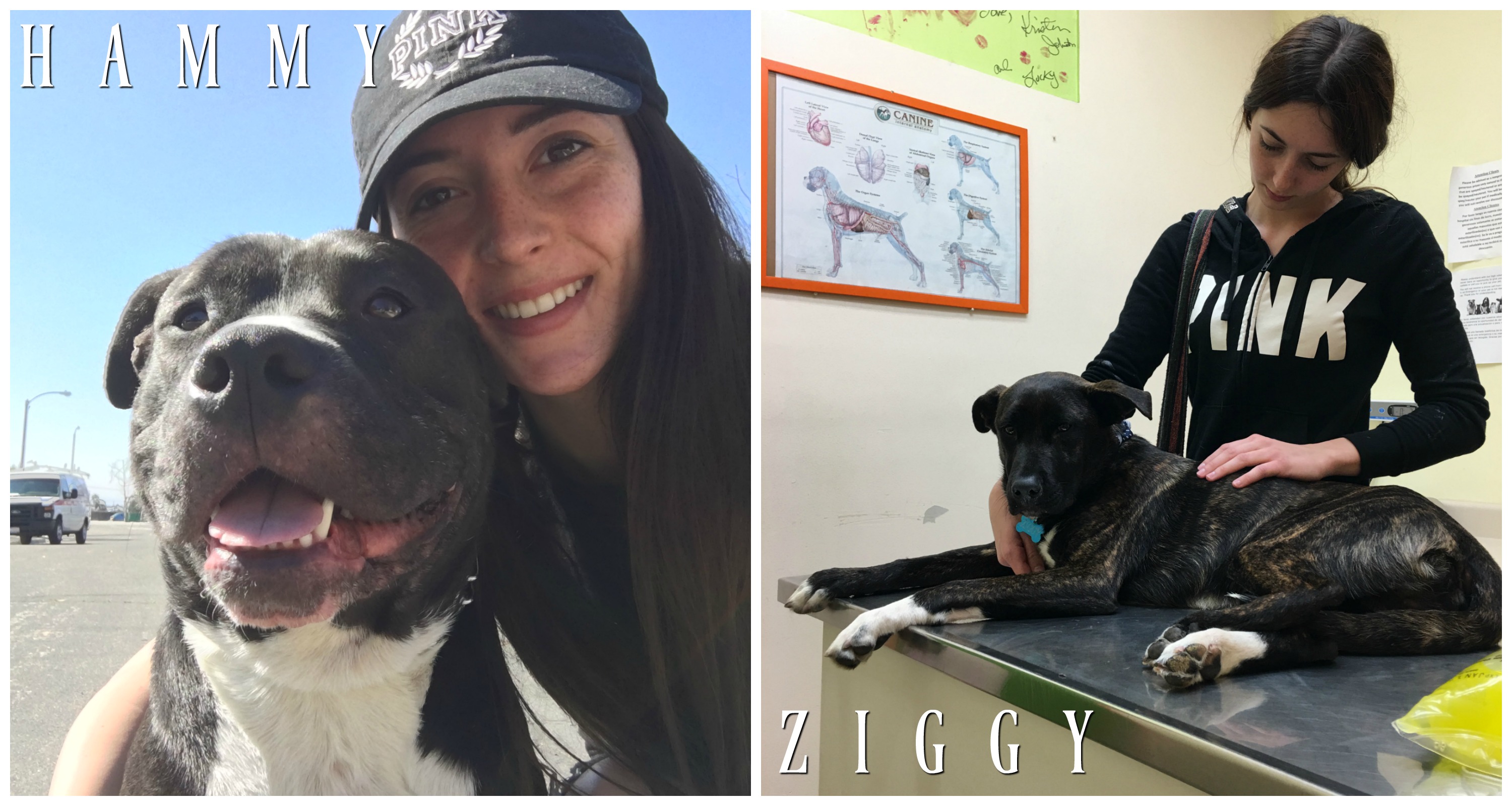 So, off Eleanor went to the San Bernardino shelter to find a new family member to bring home. She spent a few days meeting with different dogs, and then she brought her mom and her mom’s dog, Charlotte, with her. Turns out, Charlotte he was no help. She couldn’t care less about the dogs they saw, and Eleanor’s mom wasn’t surprised, as Charlotte is basically a human in a dog’s body.

Then, in the darkest part of the whole shelter, Eleanor found Ziggy. He sat in the corner and was very shy but clearly needed love. He was the one! He went to his forever home that day. The next morning, Eleanor’s mom thought that he was showing symptoms of kennel cough. A week later, they found out it was distemper. All paid by generous strangers who just wanted to help a pup in need, Ziggy got the best treatment he could have possibly received in Southern California. But unfortunately, it wasn’t meant to be. Ziggy had distemper, mycoplasma pneumonia, adenovirus type 2, and two other viruses. His distemper levels were at 42,000.

Mom said the more I rest & sleep the sooner my super important meds will get here! Just gotta hold on until Monday. So now I nap 💤🐾 #wherearethedrugs #rescuedogsofinstagram #adoptdontshop #ziggytherescue

After two grand mal seizures, Ziggy became unresponsive and Eleanor could no longer bare to watch him suffer. They had received a serum from Texas that would possibly help his distemper, but it was before the vet administered it to him that they (the vet and Eleanor) decided it was best to let him go.

My poor sweet angel 💛 On the way to Anaheim to have a vet administer a serum that may help him, Ziggy had another seizure. That totaled to 3 big seizures in less than 24 hours, and I could no longer watch him like that. I knew that he was holding on because of the love he had received from me, my family, our dog, and the many many wonderful people who dedicated their time and donated their money to try to help save him. However it just wasn’t meant to be. He’s in a better place, and I will always hold him dear to my heart. He was the start of me becoming active in the rescue community, and I will continue to help dogs in his memory. My heart is hurting right now but with time I will be ready to open up my home to another pup in need. Thank you to everyone who offered their love and support to me, my family, and my Ziggy 💛🐾 #adoptdontshop #rescuedogs #beavoiceforthevoiceless

Three days later, Eleanor went back to the shelter to help build new beds for the dogs. It was very hard going back, because she knew that Ziggy could have survived if they would have tested him before giving him a live vaccination for distemper, along with all of the other vaccines he received. Despite this, Eleanor didn’t want the pups there to sleep on torn up beds. While Eleanor was there, Cathy, from Battle Buddies (who had helped her so much with Ziggy and was also devastated by his death)  texted to let Eleanor know that if her heart was ready, there was a dog that needed her. She then met Hammy (formerly named Boomer) and that was it. Cathy’s rescue pulled Hammy fifteen minutes after Eleanor had met him and the rest is history!

Hammy has only been in his forever home since January 11th; exactly three weeks after Ziggy had arrived in the same forever home and exactly one week after he had passed. Eleanor is so in love with this sensitive, loving cuddle bug! While he is her first Pit Bull mix pup, he is certainly not her last. Ziggy was the start of her advocacy for animals and she will continue to learn from this amazing community and grow with her Hambone!

I already stole mom’s heart!! And I already know how to beg for belly rubs 😌 #TheGreatHambino #adoptdontshop #rescuedogsofinstagram #endbsl

A little idea of what Hammy eats 🐾 Canidae kibble, @natures_variety_uae rawboots mixers on top, some berries for a nice treat, a honey & coconut oil cube (with a little pb for flavor), all topped with some fish oil and chia seeds. Yum 😋 Will be transitioning to a raw diet soon #adoptdontshop

Just want to say how proud I am of Hammy. He’s always been eager to please but when I first brought him now I didn’t know how to handle him properly. I’d never had a high energy, strong dog before. And I LOVE him. He had horrible impulse control, which he still has but in a much more managed way – and we’re only getting better. We’re still working on his reactivity, but again we’re always making progress. Love my boy ❤🐾 #dontbullymybreed #adoptdontshop #dogtraining

Do you see those adorable berry stains? Courtesy of blueberries from my little cousins that adore the Hamdog 💙

Hammy lost an ear again but it’s okay because he put the other one into extra gigantic super sonic hearing mode. He may have just combined both ears. We may never know #neverforget #ripear #myblackdogisbeautiful

“Yes mom you sit in an actual seat and do your ‘people’ things while I sit on the hatchback part of the trunk. It’s sunny and I enjoy it. Don’t judge.”