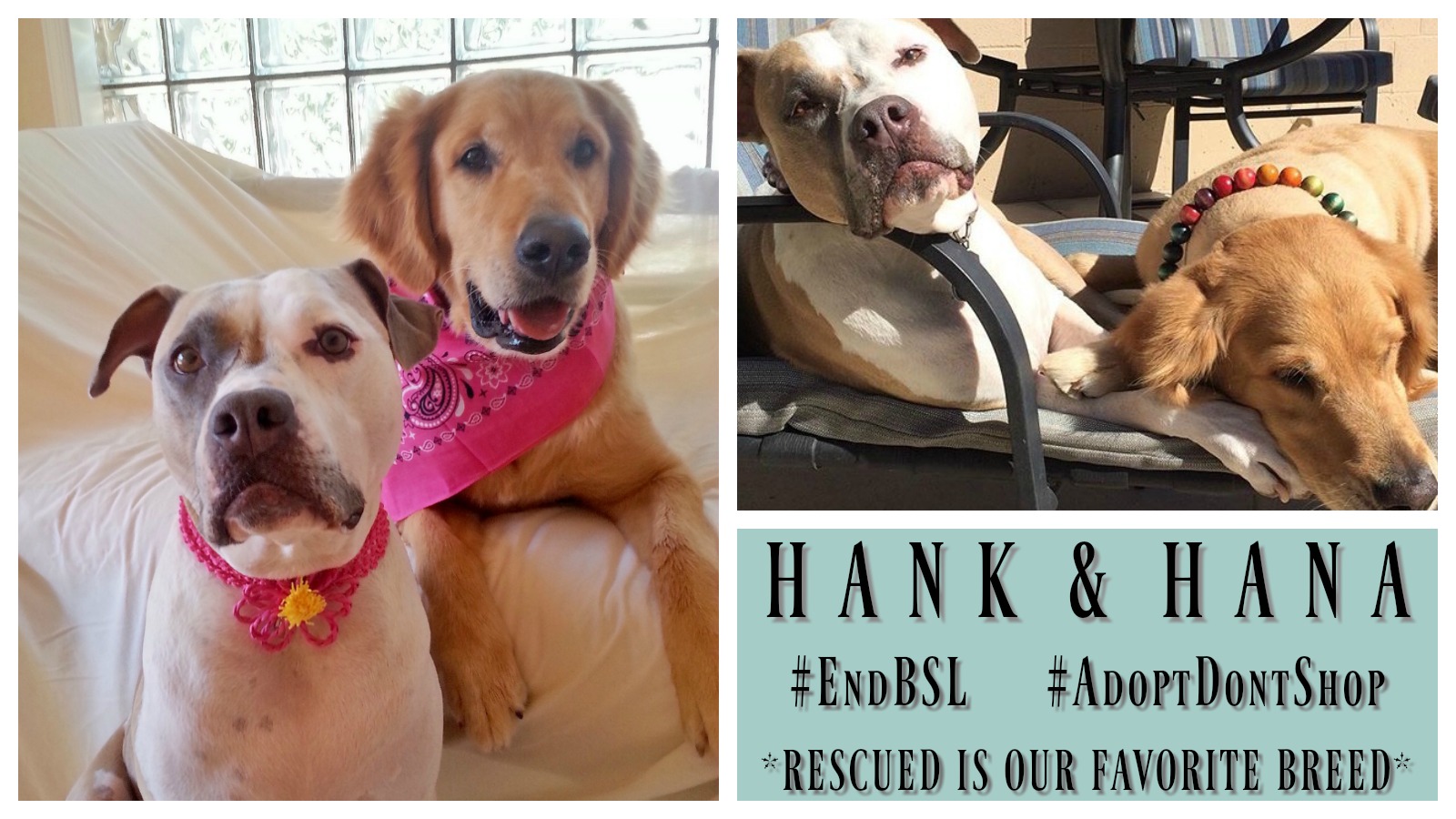 Six months into Jules’ retirement, she lost her dog. Heartbroken and completely bereft, she began looking to rescue a dog to fill the emptiness and heartache. Her husband always had a soft spot for golden retrievers and he liked the idea of adopting one, so Jules began her search. Within a couple weeks, she found Hank. 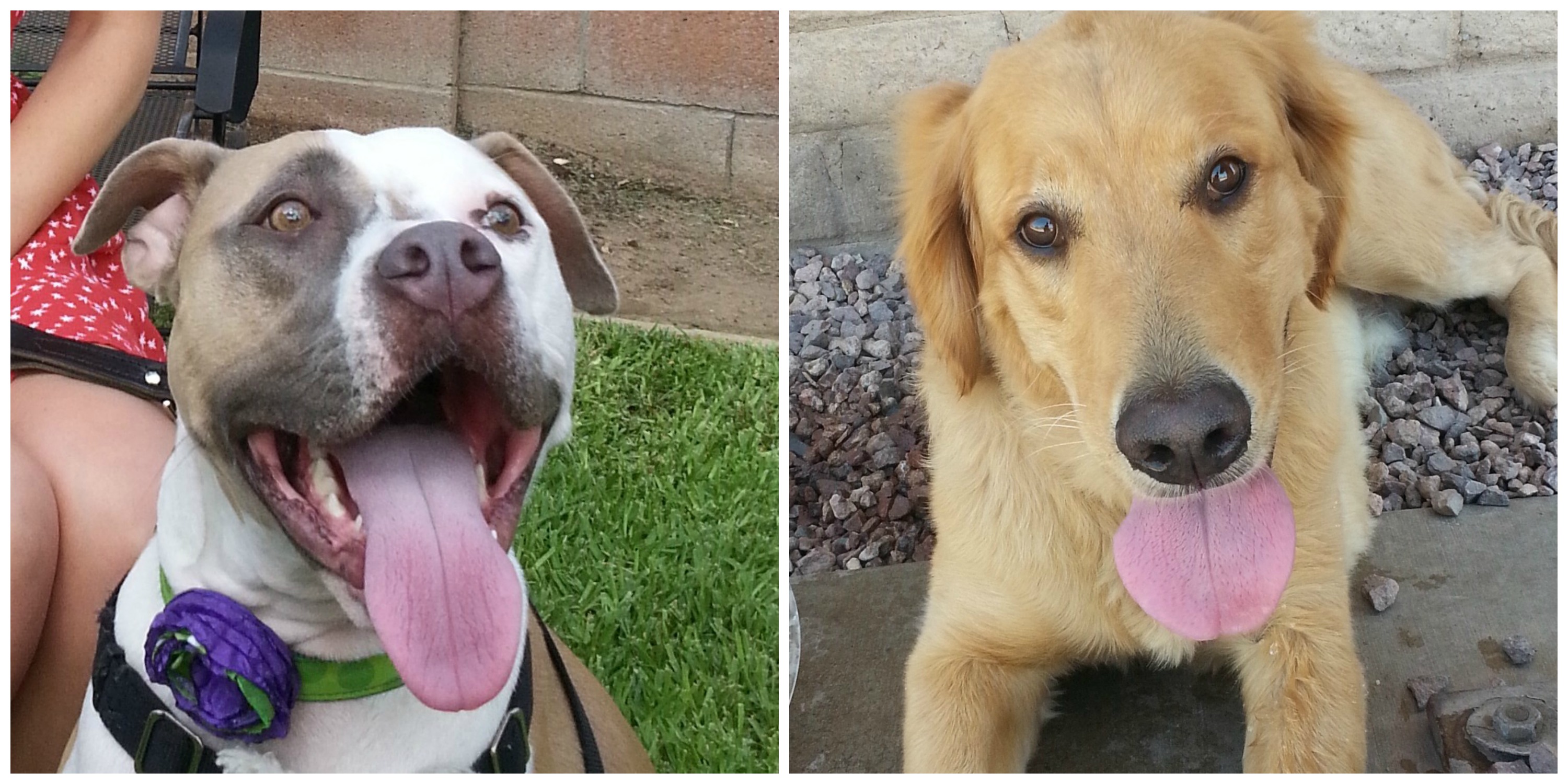 Hank was rescued from a backyard breeder in central Washington. The breeder had kept him with the intention of using him to breed. Unfortunately, she failed him miserably. She put him in an outdoor kennel where he spent the first eight months of his life. Eight very long months with no socialization. When his forever family adopted him, he was absolutely terrified of everything. Their home in Seattle sits in a very busy, urban neighborhood and Hank would pancake to the ground the moment they stepped out the door. Jules had her work cut out for her. But, it was work that would heal her broken heart, as well as Hank’s broken spirit. Within six months, Hank was a new dog. His confidence grew by leaps and bounds and while he continued to have (and probably always will have) some anxiety in new situations, he was thriving. When they left Seattle for their winter home in Arizona, their family felt complete. 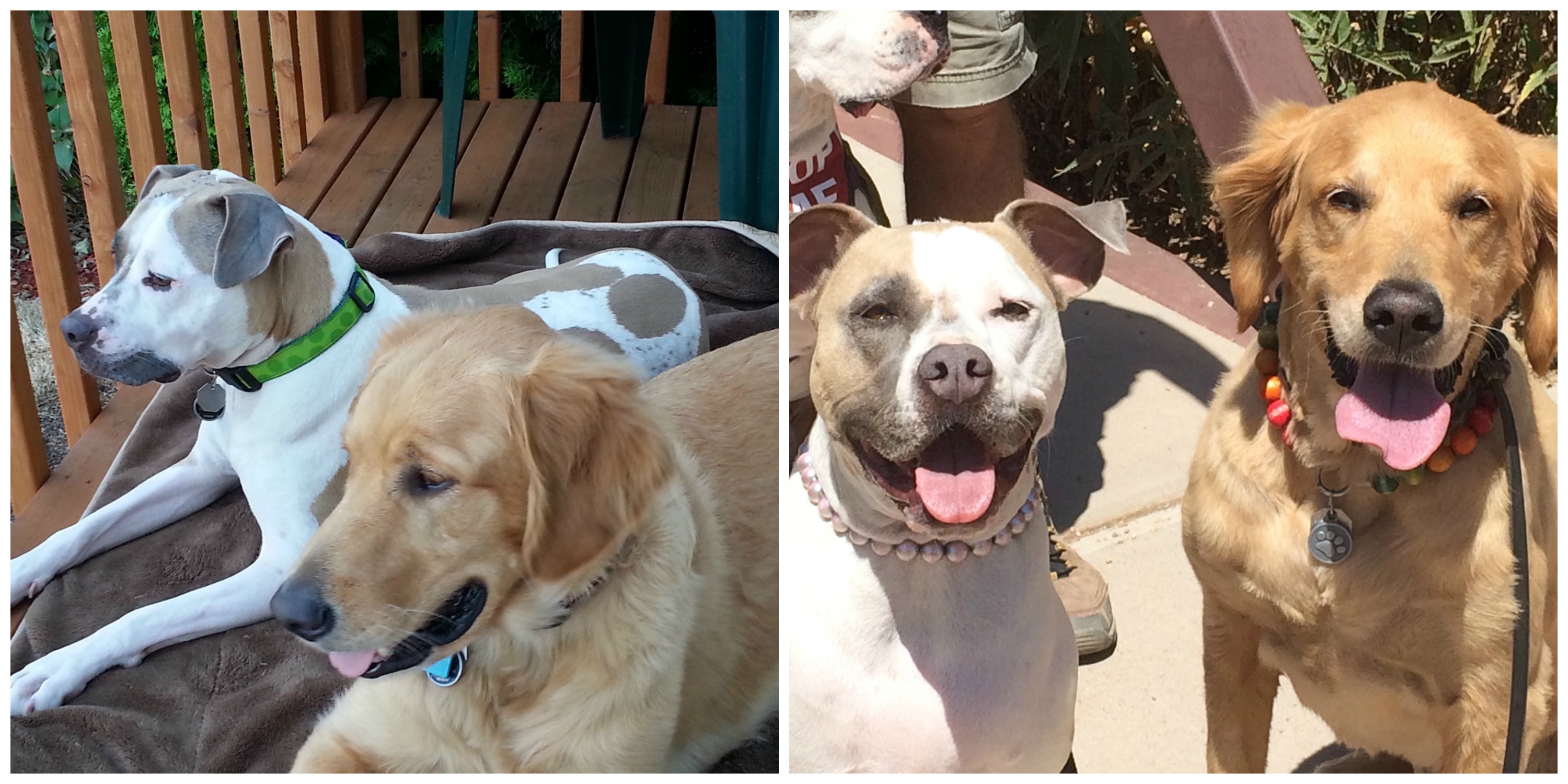 Winter in sunny Phoenix was filled with many adventures for Hank. But it was at the dog park that his parents learned of his true passion. He was loved by all the dogs and their humans. They spent hours at the park. Hank would typically just hangout. He didn’t really play. He observed. He would run and greet every newcomer that arrived, but then would go lay back down. With one exception: Pit Bulls. It soon became apparent that Hank loved, loved, LOVED Pit Bulls. He played and played and played with every bully that arrived. It was adorable. So, obviously, his parents had to get him one! Little did Jules know how her world was about to change.

Jules and her husband adopted Hana from the Arizona Humane Society just before they headed back to Seattle for the summer. She was seven months old and full of all the confidence that Hank had lacked. Hana had been surrendered to AHS at two months of age with a skin infection and no hair due to a serious case of mange, as well as a severe injury to the top of her head. Thankfully, she immediately went into a loving foster home to recover and learn essential social skills. Her forever family found her the day she became adoptable. After her adoption, she endured two surgeries to correct the damage to her head. Despite suffering abuse at the hands of humans, Hana held no grudge. She had a love and enthusiasm for life that was a joy to behold. She was pure love. Her parents didn’t really have any feelings one way or the other about the Pit Bull “thing”. They knew they had a bad rap, but they didn’t REALLY get it. She was just their lovable dog. They were oblivious. Then they began to see. 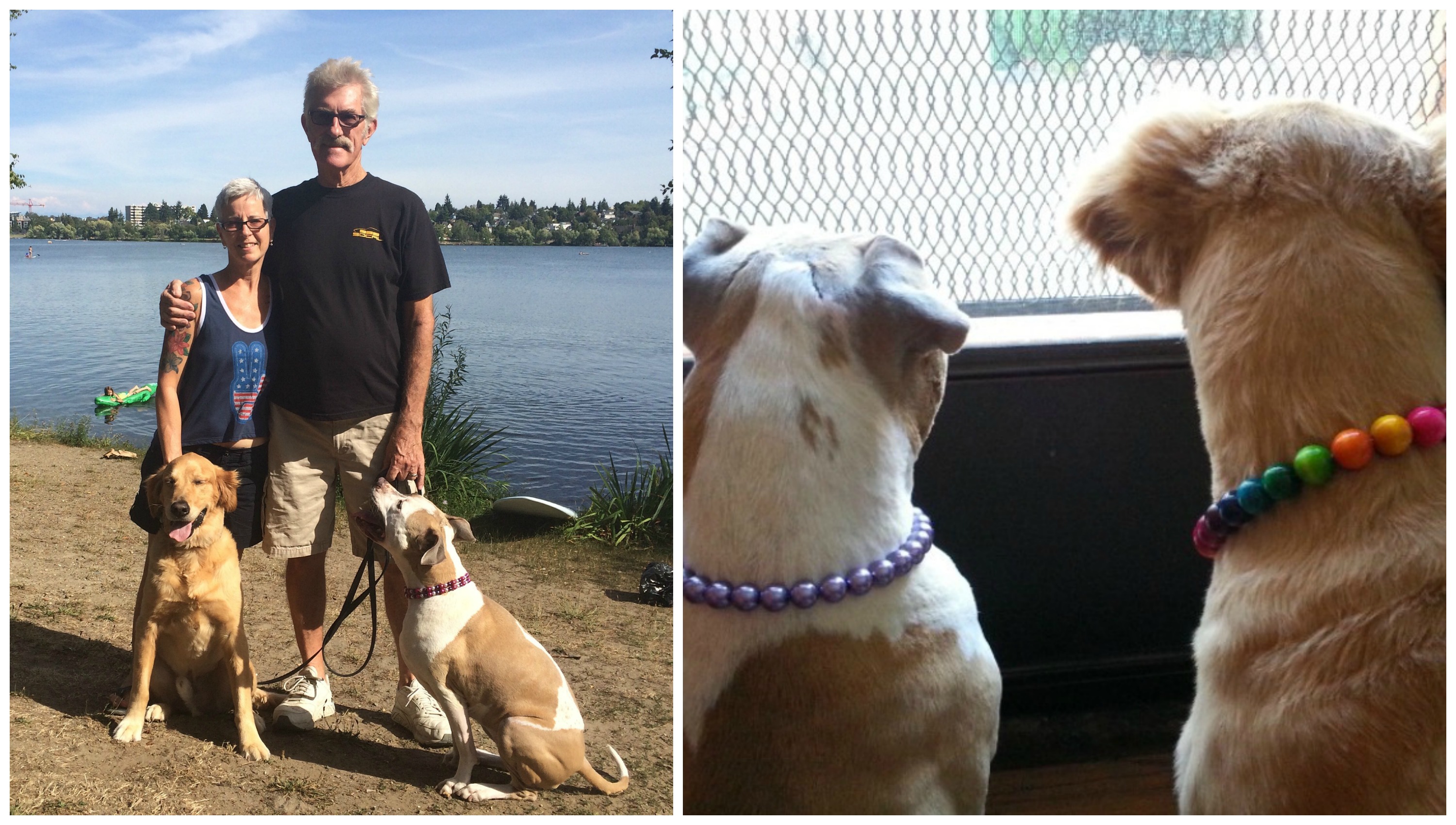 When you walk a golden retriever, people go out of their way to stop and say hello and get a little puppy love. If he rushes up to greet them, they laugh and tell you not to worry about it. When you walk a Pit Bull, things are not often that way. Jules’ heart broke every time someone crossed the street to avoid her Hana. Or recoiled in horror upon hearing that she was a Pit Bull. So, like many others before her, Jules vowed to be her voice and she educated herself so that she could speak knowledgeably when confronted with negativity. And that’s how she found herself spending her retirement in the company of Pit Bulls and the people who love them.

Back in Arizona the following winter, Jules signed up to “Get Fit With A Pit” for the month of January, where you go pickup a Pit Bull from the rescue and take them hiking. It gave the dogs exercise and socialization, as well as much needed exposure. This wonderful event was created by Lost Paws Dog Rescue (they have since changed their name to AZK9 Rescue) and it was the beginning of a beautiful friendship. Jules took a dog out hiking every day that month. Meeting people on the trail and talking everything Pit Bull. Sometimes she’d go out twice a day. She got her husband to join in. And when the event ended, they just kept on going. Hank and Hana joined in, hiking the trails with new adoptable friends. Now, all these years later, they’re still at it. Five days a week. It’s what they do. They hike, they walk and walk and walk, they take them to happy hour! Jules and her husband brought some home for a day or a sleepover. They cheer a newfound confidence or manners. They celebrate when they find their forever home. And they’ve cried when some were lost.

Jules feels enormously fortunate to be able to spend her days in the company of these beautiful, loving and forgiving animals. They remind her to be present. To greet each day with joy. To forgive easily. And love unselfishly. And it’s all because of Hank and Hana. It’s all because a rescued golden retriever rescued a Pit Bull. RESCUE. ADOPT. ADVOCATE.

The party’s over. ☹️

HANK. Because sometimes life is difficult and you just need to look at pure love. ❤️ #theHANKinator #lifeisgolden #dogtherapy

Today’s #tongueouttuesday is brought to you by Hana and her BFF, adoptable Toro. 👅 This adorable land seal is searching for a very special person to step up for him. You see, Toro was born with mega esophagus (ME), which simply means that his esophagus doesn’t work properly. What does that mean for Toro? It means sitting in a Bailey Chair (which keeps him in an upright position) to get his food and water. No big deal. Other than that, this handsome hippo is just a normal, rowdy, rambunctious young stud who loves running and rough housing with his friends. In our opinion…He. Is. Perfect. Toro is available in the Phoenix area through @azk9rescue and you can even follow some of his adventures on his very own Insta page @daytrippinwithtoro PLEASE SHARE this precious pup and help him find his forever home. ❤️ #adopttoro #adoptdontshop #rescuedog #pitbull #pitbullsofinstagram #whogivesapit #showusyourpits #standupforpits #adoptedisthebestbreed #pittielove #pittieproud #imalovernotafighter #loveisapittie #itsapittiefulllife

Today Hank reunited with his favorite hiking pal, sweet Honey! These two have hiked A LOT of miles together while Honey waits for a home of her own. Honey even has her own IG account. Check her out at @honeybowwow. She is an absolute LOVE ❤️. Hike on dudes! #theHANKinator #honey #besties #lifeisgolden #itsapittiefullire #adoptdontshop #rescuedismyfavoritebreed #dogs #dogsoﬁnstagram #hikingbuddies #azhiking

Rub a dub dub, Hank and Hana in a tub 😄 #cuzyaknowgoosepoop 😝