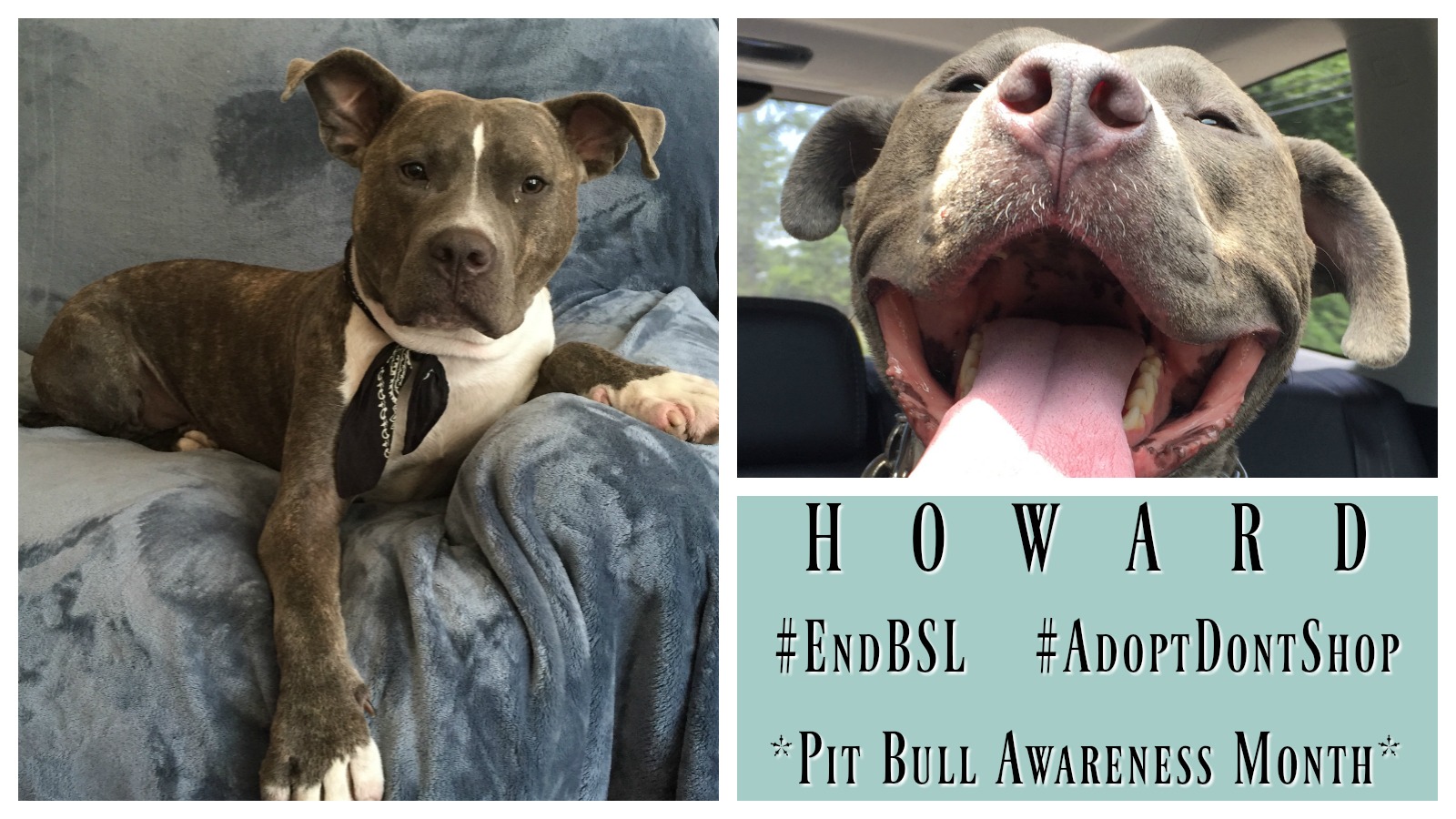 Madeline lives in Chicago and works at a dog daycare, Bark Avenue Playcare. The daycare has had many rescue dogs come through their doors for temporary shelter, and they have worked with many non-profit rescues in the past. Madeline has been employed at Bark Avenue for about 4 years now, and 2 years ago, Howard came in to board from a rescue called Recycled Pits. Madeline and Bark Avenue Playcare weren’t really told much about him or where he came from originally, but it was clear that he was extremely malnourished and suffering from a bad case of mange. 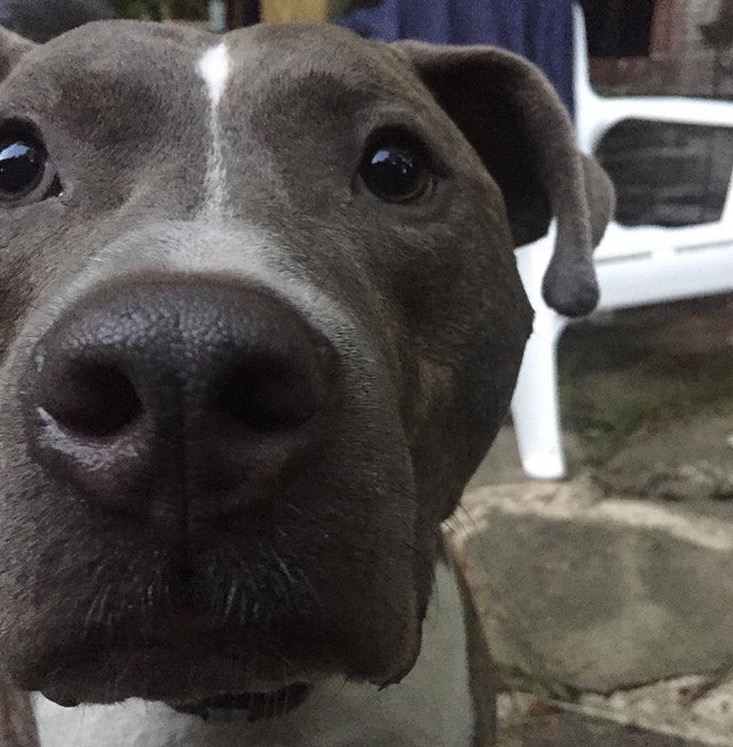 Howard wasn’t for the inexperienced dog handler, to say the least. He was really high strung, loud and extremely kennel aggressive/leash aggressive – but that’s part of the reason he grew on Madeline. She’s always had a soft spot for the more difficult pups because she knows how much harder it is for them to find homes. After about two months or so of him boarding, it became clear he wasn’t going to be leaving anytime soon. Madeline had just moved out into her own apartment, and after going into work everyday and seeing the terrible shape Howard was in, it broke her heart to think he’d be stuck there any longer while other dogs moved on to find homes. So, she decided to foster him. 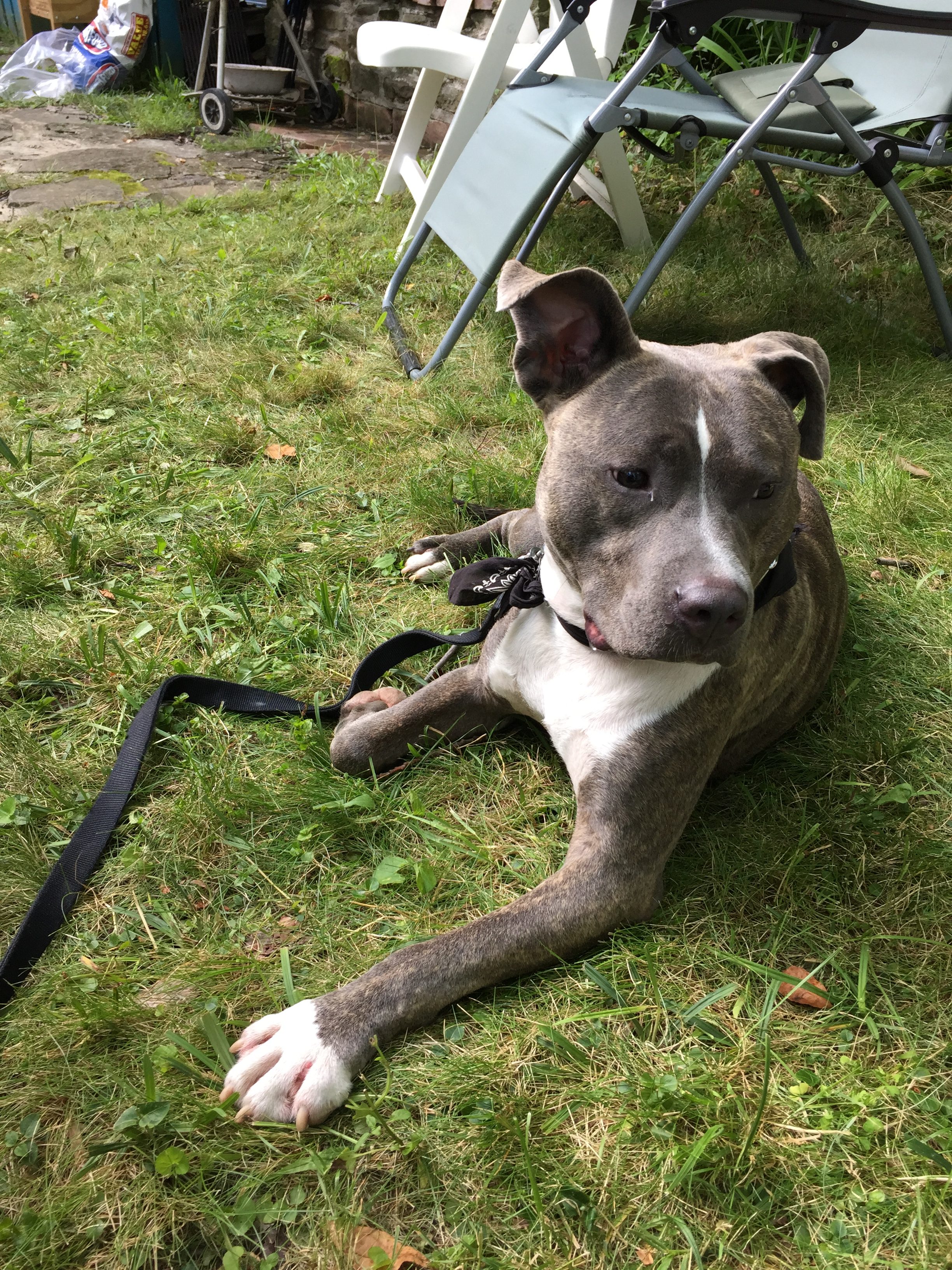 The minute he left the shelter and stepped foot in Madeline’s place, his whole personality shifted. He was so calm, he never had accidents in the house, and his spirit seemed lifted. He completely stole her heart after the second night, when he jumped up on the couch with her and put his giant head in her lap. She looked down at him and she remembers thinking that he had changed her life without even realizing it. Looking into those big, puppy dog eyes, Marilyn knew there was no way she could ever give him up. From that day on, she took care of him. From many vet visits while his mange cleared up, to countless toys and hugs and belly rubs – the rest is history.

Howard is almost four years old now, and still suffers from health problems that they haven’t been able to solve – the demodectic mange he had still flares up in his feet off and on, and doctors haven’t been able to tell why his body can’t seem to be completely clear of it. Madeline was never able to get in contact with his rescue after she took him home, so she’s not sure what his background is or if his past has something to do with it.  Regardless, they keep moving forward and overall, he is happy and full of life and love! 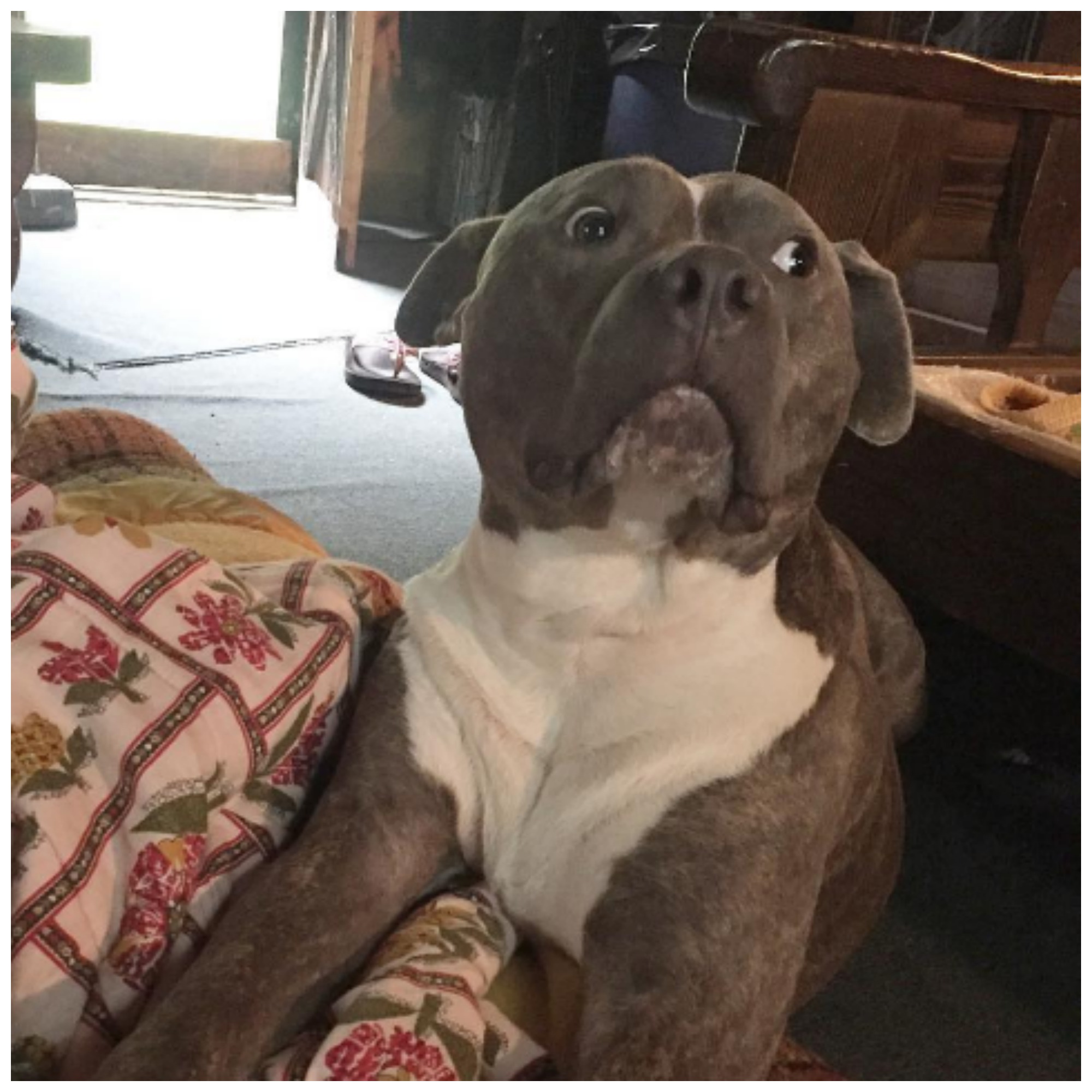 Madeline is a huge supporter of rescuing, as well as a bully breed advocate.  She knows that pit bulls need us to stand up for them, spread awareness and let others know that they are wonderful dogs.  They should NOT be stigmatized or discriminated against. The biggest lesson Howard taught Madeline when she adopted him was that he, in turn, rescued her. She found purpose in her life by becoming his mama. He is a constant reminder to be appreciative and to be kind. Sometimes, she just looks at him and it brings tears to her eyes because she is so grateful to have him in her life. He is also part of the reason she plans to run her own rescue someday, and she has dedicated her future to the care of animals.

Our hearts go out tonight to all the homeless pups and broken families in Montreal ???? It is absolutely horrific that a law like this can be passed, and we are truly baffled by the discrimination, ignorance and hatred that still exists all around us in the world we live in today. Let’s all reach out and do what we can to volunteer/donate/foster/adopt/sign petitions to fight this law and help save thousands of innocent dogs that are currently facing death row and are being threatened to be taken away from their families and euthanized. END BSL. #Wegiveapit #endBSL #dontbullymybreed #montreal #standupforpits #pitbullsofinstagram

If ya don’t hear from me for a few days it’s because I’m ON VACATION! Grandpa says we have another 4 hours or so driving. I’m pumped to be out in the woods soon and sunbathing by the pond, but at this current moment I’m wondering when the next rest stop will be? I’d like some Burger King floor fries, please. ???? #pitbullsofinstagram #pitbullsofinsta #rescuedogs #pitbulllove #pitbulladvocate #ourpitpage #adoptdontshop #dontbullymybreed #pibble #mamasboy #roadtrip #ridingincarswithboys

Good morning ma, you can give me all of you’re attention now ???????? I’d like breakfast in bed and some cuddles – chop chop this belly ain’t rubbing itself! #pitbullsofinstagram #whogivesapit #spreadtherumor #adoptdontshop #mamasboy