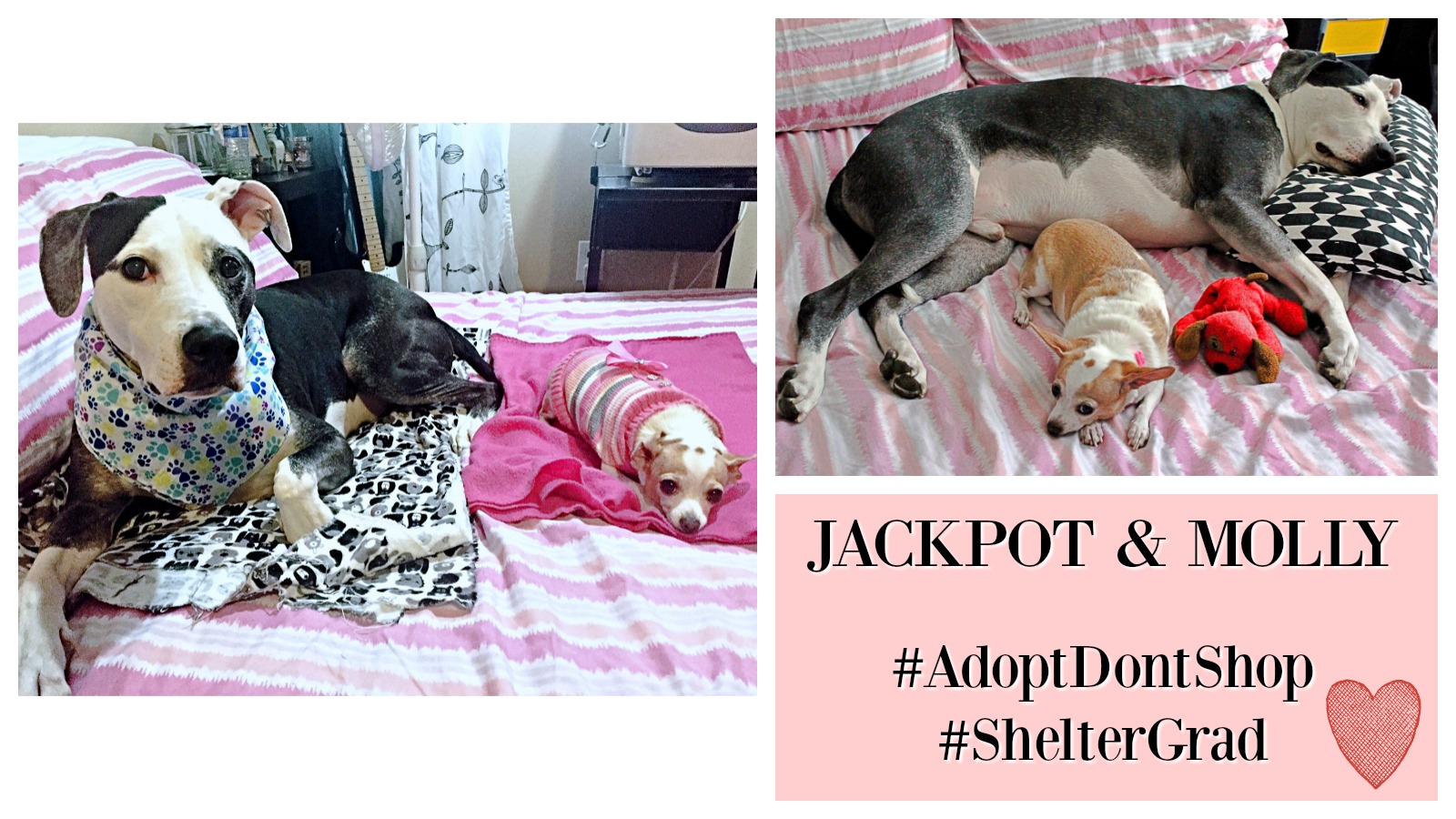 In 2010, Lina decided that it was time to check her local animal shelters for a companion. There was a shelter right across from the Target she used to work at, so she decided to start her search there. She adores all animals – every single dog, cat, bird, etc., because she was taught to love and respect all creatures at a very young age.  When she saw Jackpot at the Burbank Animal Shelter, Lina knew he was the one for her! While all the other dogs were jumping and shaking their tails, Lina spotted a shy, black and white puppy sitting at the back of his kennel, looking hopeless. Lina asked the front desk for his info, and they said he had a hold for two more days.  He was found roaming the streets and they were waiting for his owner to show up. His owner never did. 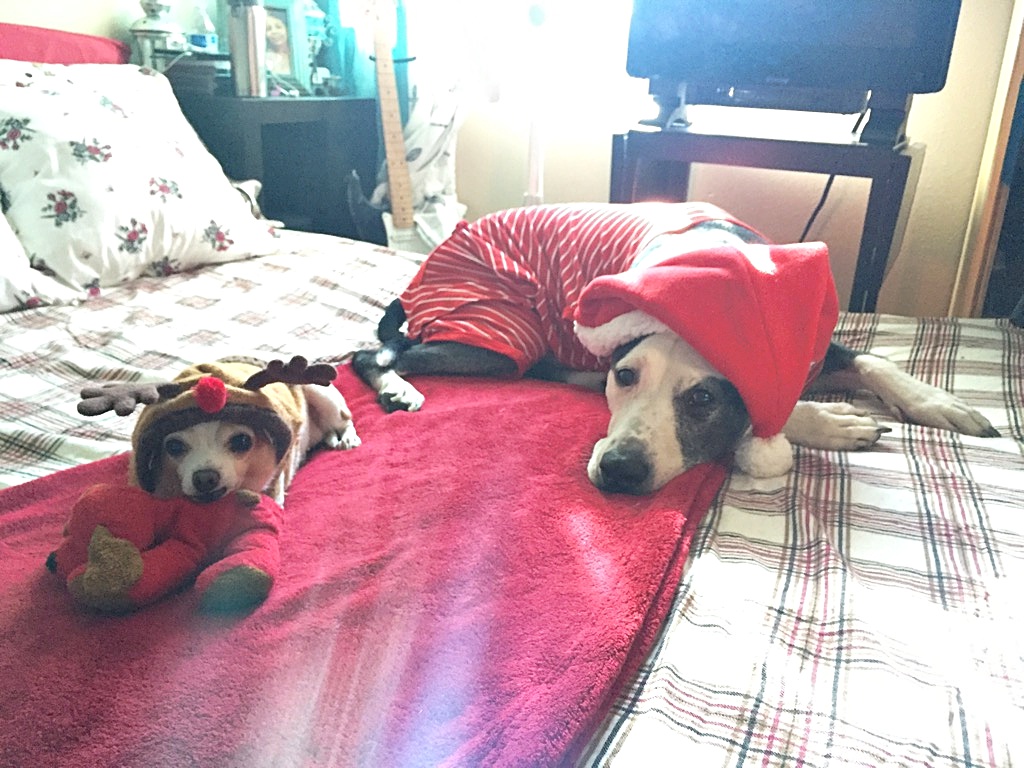 Two days later, Lina returned to the shelter to adopt Jackpot. It turns out, somebody else also wanted to adopt him, so the officer at the front desk said they had to do a raffle to decide who Jackpot would go home with. Lina had never won a raffle in her life, so she was in shock when the officer pulled her name! Jackpot, or ‘Domino’, as the volunteers had named him, was very shy when he first met his forever mom, but still incredibly sweet. Lina will never know what happened to him before they met, but she knows he was not treated well.  Jackpot has some scars on his face, one of his ears has broken cartilage, and he is still scared of people. After a couple of days with her new fur-baby, Lina decided to name him Jackpot, because she thought it was a better fit – it perfectly describes how she felt when she got to take him home! Lina felt like she had won the biggest jackpot there ever was! Jackpot is the most gentle, noble, and loving soul she has ever met, and it is because of him that she decided to try her best to help other animals in need. 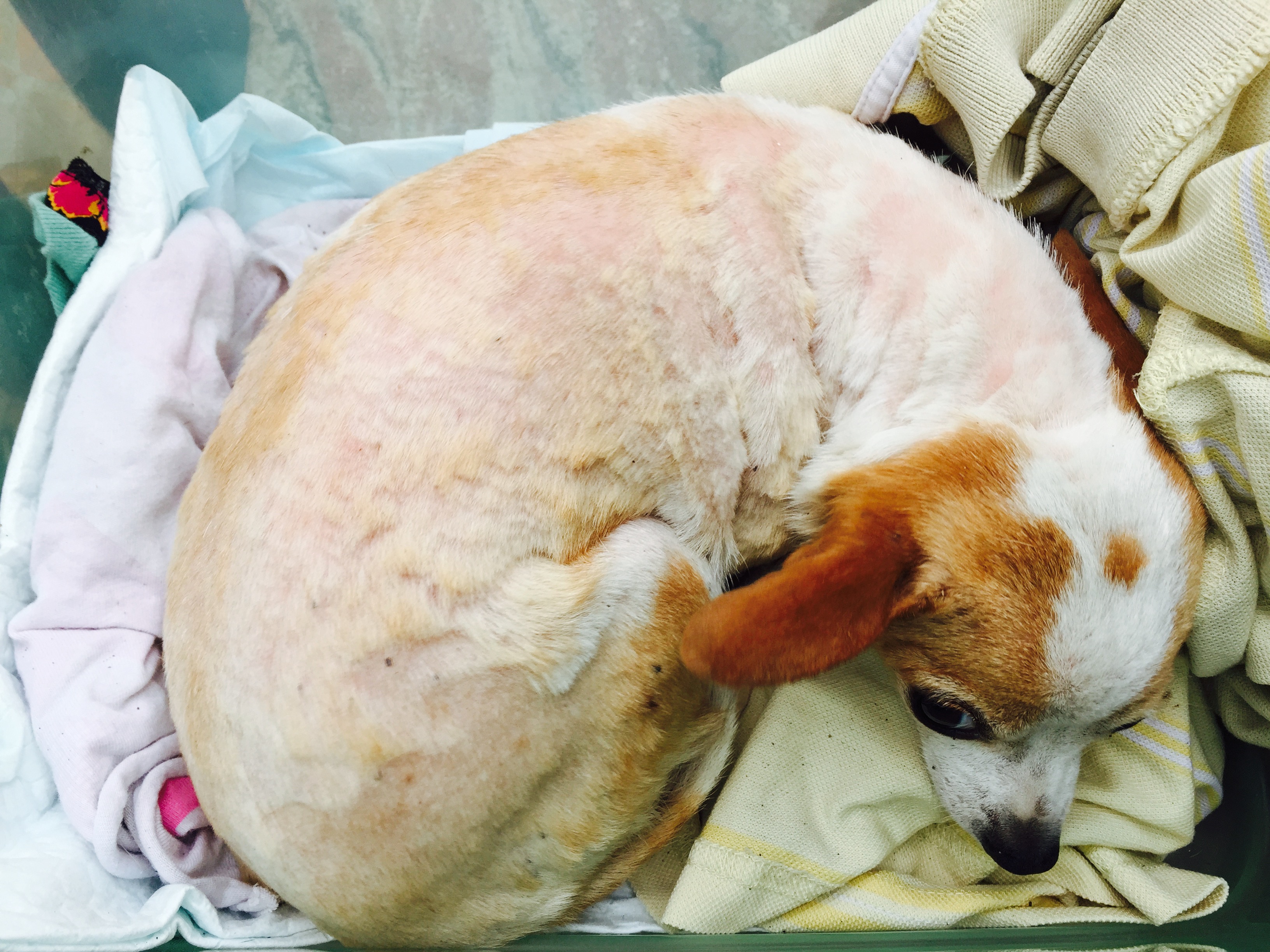 Last year, Lina opened the door to her house to find a little Chihuahua (now known as Molly) in pretty bad shape.  She was covered in ticks and fleas, and was incredibly skinny. Lina decided to give her a bath to help her find some relief, and that is when she noticed Molly was missing most of the hair from the neck down (probably due to scratching herself so much). After the bath, Lina and her parents started getting rid of her ticks, which were embedded in her skin. 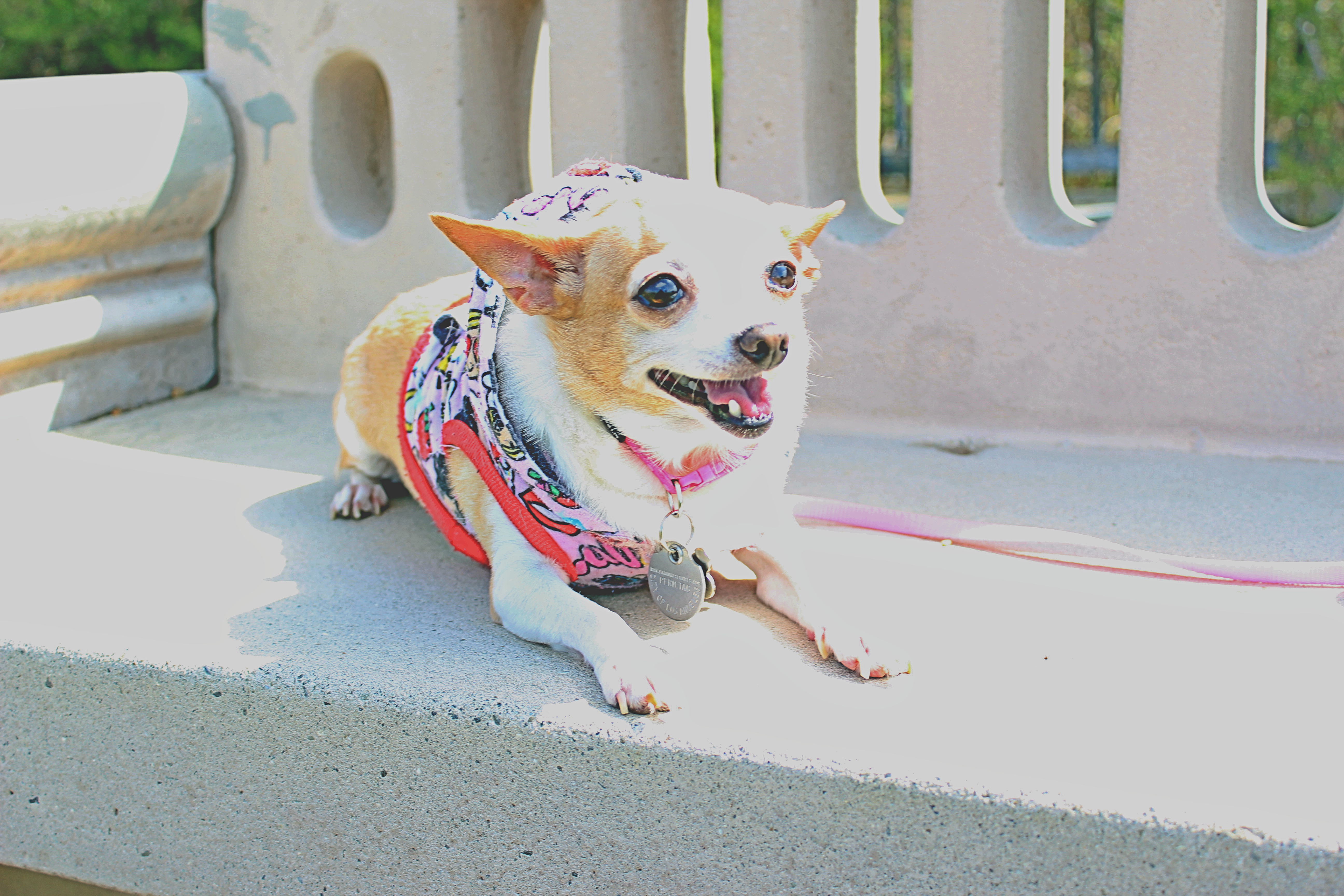 Lina decided not to take Molly to the shelter that day because of her condition.  Instead, she took her to the vet.  They scanned her for a microchip, but couldn’t find one.  They also gave her some medicine to help with her skin infection, and then spent about two hours removing the rest of the ticks. Unfortunately, ticks, fleas and dehydration were not the only things Molly was suffering from. When the vet looked inside her mouth, they discovered that she was missing some teeth, and that she needed several extracted. They gave Lina a quote for dental procedure, but she couldn’t afford to pay it that day, so she and Molly left the vet’s office. Lina looked around her neighborhood to see if someone was looking for a Chihuahua, even though the vet said most likely no one was looking for her. Molly looked like she was neglected for a long time. Lina also looked online for help to pay for Molly’s dental procedure because the infection in her mouth now seemed to be causing respiratory issues.  Thankfully,  Ghetto Rescue Ffoundation  (GRFF) contacted Lina saying they would pay for the procedure if she took Molly to their vet. Lina accepted right away! Once at GRFF‘s vet, Molly was also spayed. After almost three months of taking care of Molly, Lina decided to legally adopt her in October 2015!  Molly has recovered beautifully since then, and is the spoiled little princess of the house!! 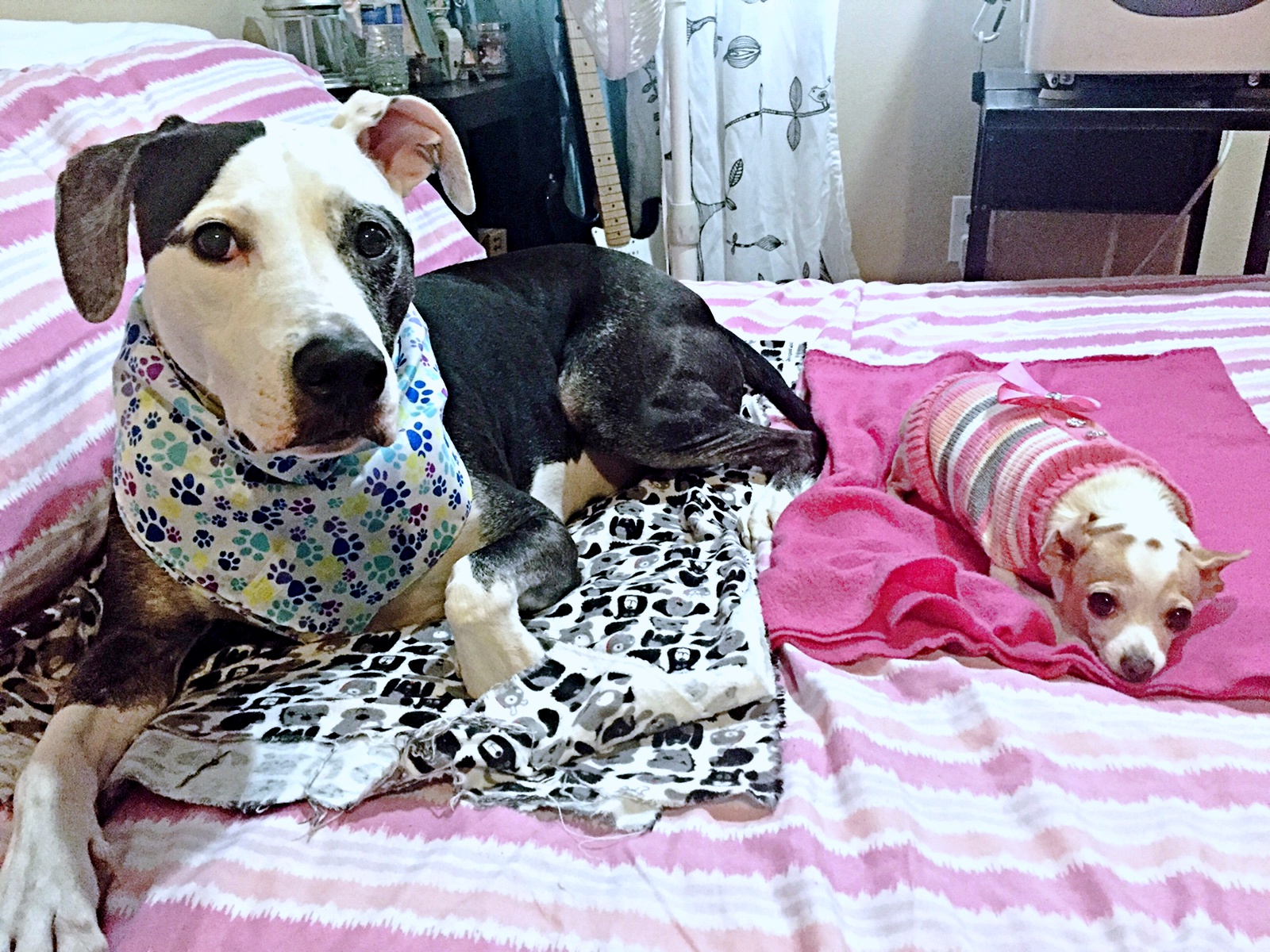