Rescue and Adoption sometimes requires a number of dedicated and selfless people! 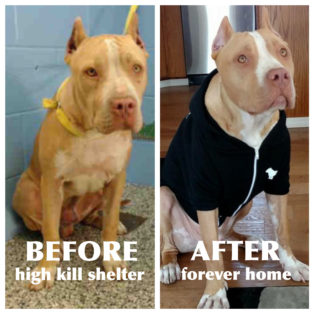 When Boss was under a year old, he was picked up by Animal Control after roaming the streets, and taken to the San Bernardino City Shelter.

Boss’ forever family saw his pictures and videos posted on Facebook by rescuer Maria Sanchez, and decided he was the right fit for them. They immediately knew that they wanted to try and save him! SBC is a “high kill” shelter due to the number of intakes, and they were aware that his time was short. Under the guidance of Lexxi Paul, a Los Angeles based rescuer, Boss’ family started to inquire about getting him pulled. They were able to adopt him over the telephone, literally minutes before he was scheduled to be euthanized. Arrangements were then made for the shelter to transfer him to a veterinarian where he was neutered, chipped, and then boarded for a few days while he waited for a transfer to Portland, OR. 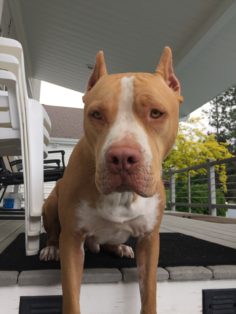 After his long journey to Portland, Boss’ dad met the transport, waited for him to be unloaded, took him for a short walk, and then loaded him back into his car for their 5 hour trip to Boss’ “forever home.” For almost the entire trip, he laid his head on his new dad’s shoulder, as if he knew he was safe, and was saying thanks! Needless to say, Boss and his dad bonded pretty tight during that 5 hour road trip! 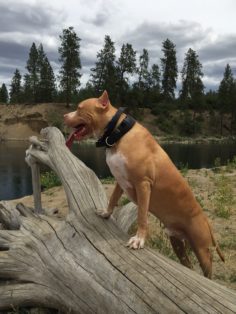 Boss has been with his family for a little over a year now, and he has added so much to their lives. He is a lovable guy with so much personality, unbelievable drive, and is so smart. He has completed his obedience classes, and has been awarded his AKC Canine Good Citizen title. He continues his daily training, with the goal of possibly becoming a Therapy Dog in the future. 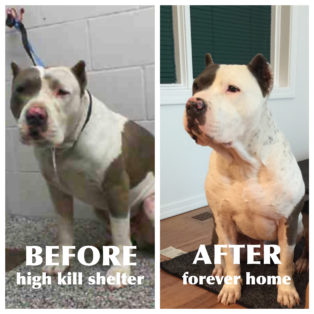 Tank, at the age of 2, was picked up by Animal Control and taken to the San Bernardino City Shelter for the second time, apparently not wanted by his previous owners.

Tank’s forever family saw his pictures and videos posted on Facebook by rescuer Cari C. Ensley. They wanted to add another pup to their household, and with the help of Kari Lee Hart of Dream Team Angels Rescue, they were able to put a rescue hold on him while they worked out the logistics. 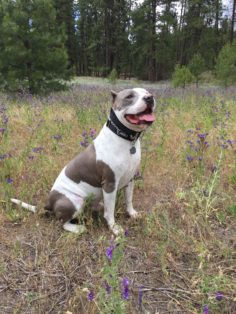 Suzanna Ruiz, a Los Angeles based rescuer, took him into temporary foster care, chauffeured him around and got him to a veterinarian for an evaluation, a check-up (he apparently had been hit by a car prior to his first stay at the SBC) and chipped.

Paws Without Boarders, Inc reserved a spot for him on their next transport, and it was off to Portland, OR, where he was met by Lori Small, another partner of Dream Team Angles Rescue, for an overnight stay. The following day, he was taken to the Hillsboro Airport, where he was loaded onto a Pilots N Paws airplane for his private flight directly to his “forever home” in Washington State. Tank’s dad met him and his two pilots at the airport, and after a brief neutral meeting and introduction with his new pit bull brother, Boss, Tank’s new family determined that the two of them tolerated each other, and it was off to his new home to decompress. 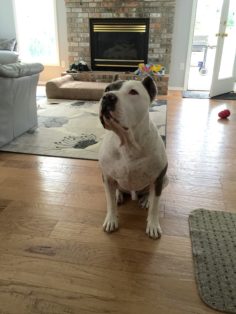 Tank was obviously a product of a bad situation, and had human trust issues. He has been with his forever family for almost a year, is turning into a great breed ambassador, and is best buddies with his adopted sibling. Tank’s furever family doesn’t think they have truly seen his total personality as of yet, as he still comes out of his shell a bit more every week, and holds his head higher every day. He is so affectionate, and although he is a big guy, it just means more of him to love and cuddle! He has completed his basic obedience classes, and he continues his daily training.