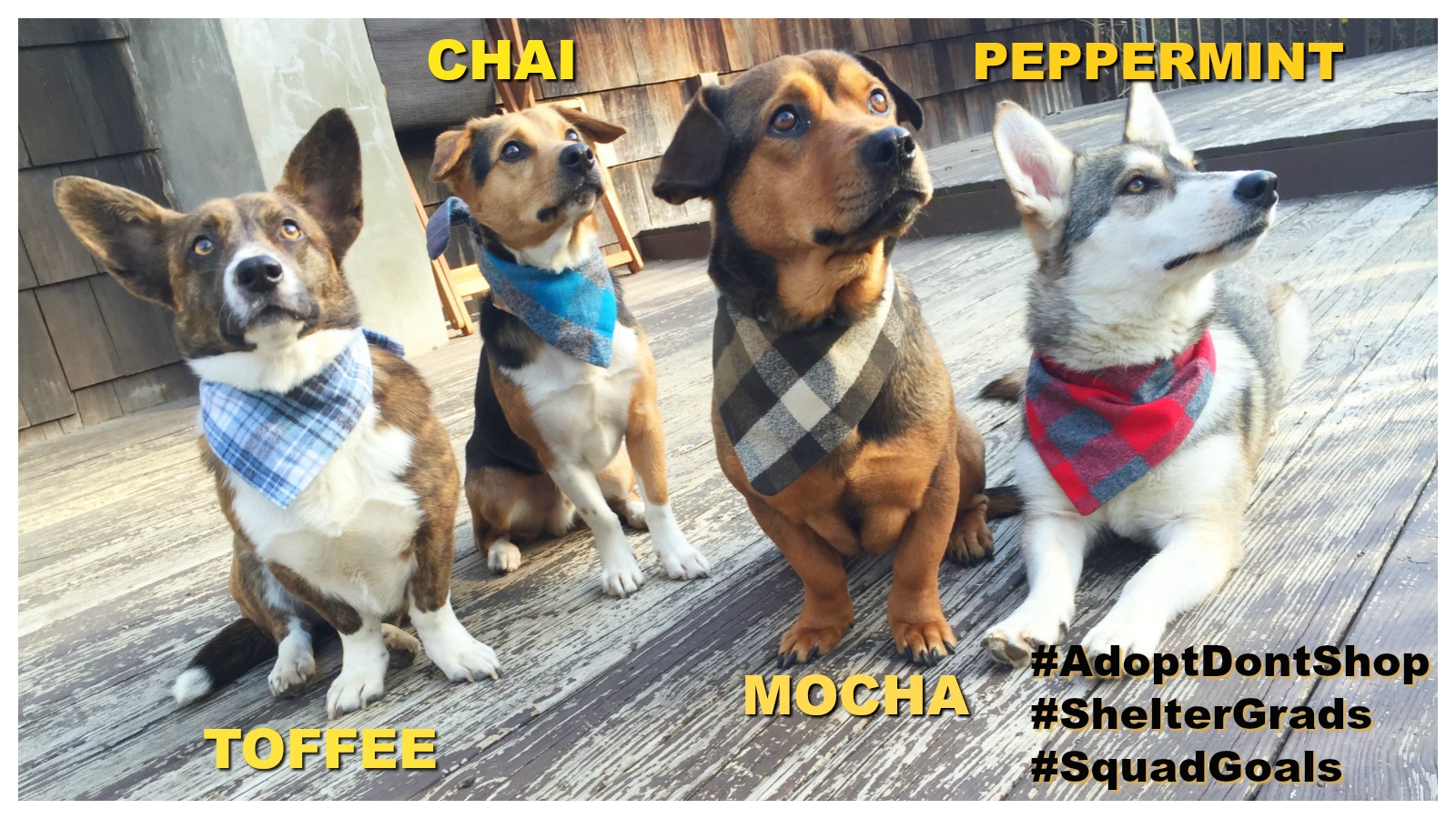 The Dundon Family live  in NJ and feel extremely lucky to have been rescued by their four pawesome dogs: Mocha, Chai, Toffee, and Peppermint. They also have 2 rescue cats, Kimchi (Chi) & Miso, adopted from Eleventh Hour Rescue.

The Dundons adopted Mocha from Perfect Pets Rescue on August 16, 2014. They were searching for a furbaby to bring into the family and saw her profile on petfinder.com. She was an owner surrender from a small kill shelter in GA. The rescue group saved her, renamed her ‘Baja’ and transported her to Upstate NY for adoption. Her previous owners claimed that she had too much energy. On the contrary! She’s a big couch potato and will lay with you for hours. She was supposed to be adopted by another couple at first, but those people decided to adopt another dog from the rescue instead. 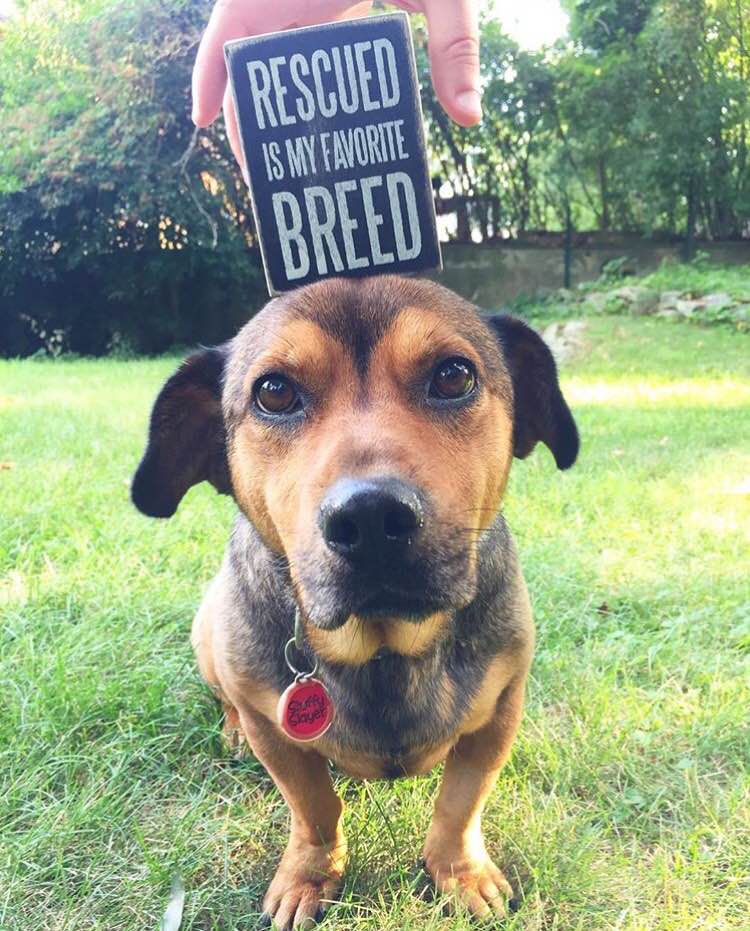 The very first thing her forever family had to do was gain her affection. She didn’t show much interest in her new family during the two meet and greets they had with her and her foster mom.  However, as the days went by, she slowly opened up. Once they had her trust, they worked with her on basic obedience. It was clear that she had no exposure to training previously and was resistant at first, but gradually started to learn how to sit, stay, and lay down, among other tricks. They also had to work with her on mannerisms so that she didn’t nip when she felt uncomfortable. That resulted in lots of hugs to get her used to being touched. She has since blossomed into a mild tempered diva!

In the beginning of June 2016, Mocha started showing signs that she had trouble going to bathroom. Her family took her to the vet and was told that she had what looked like very bad inflammation in her anal glands. She was on antibiotics for 2 weeks but it didn’t get any better. At that point, the vet said it’s definitely a mass that needed to come out and chances are it may be carcinogenic. The vet estimated that they had 6-12 months with Mocha, if it indeed was cancer. On June 30, a surgeon operated on Mocha. The mass was taken out and luckily, the biopsy came back negative! She’s been recovering since. 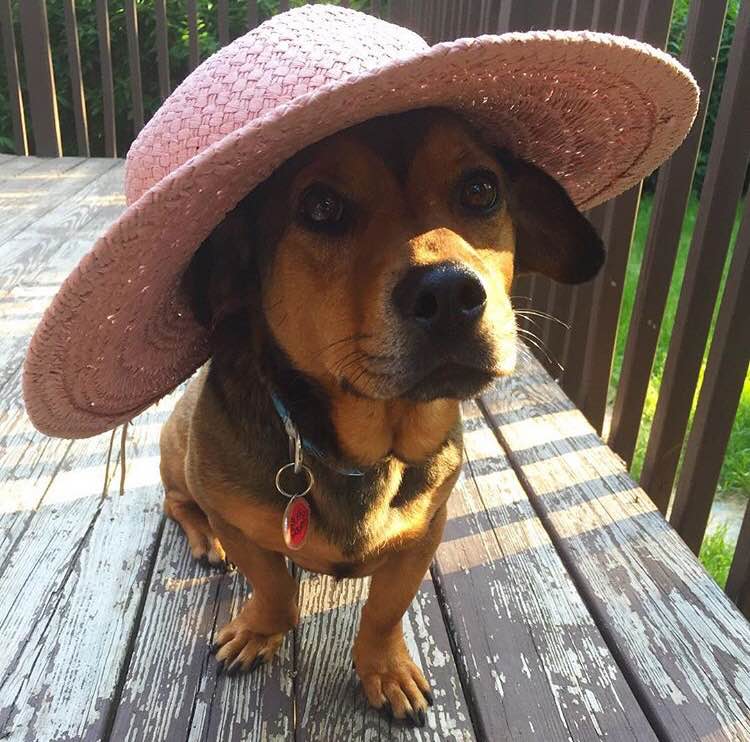 Mocha is the best, first dog her family could have asked for. She taught them more about themselves than they thought possible and prepared them for what’s to come. She is the alpha of the pack, leads all the play sessions, and protects everyone with her fierce deafening barks. 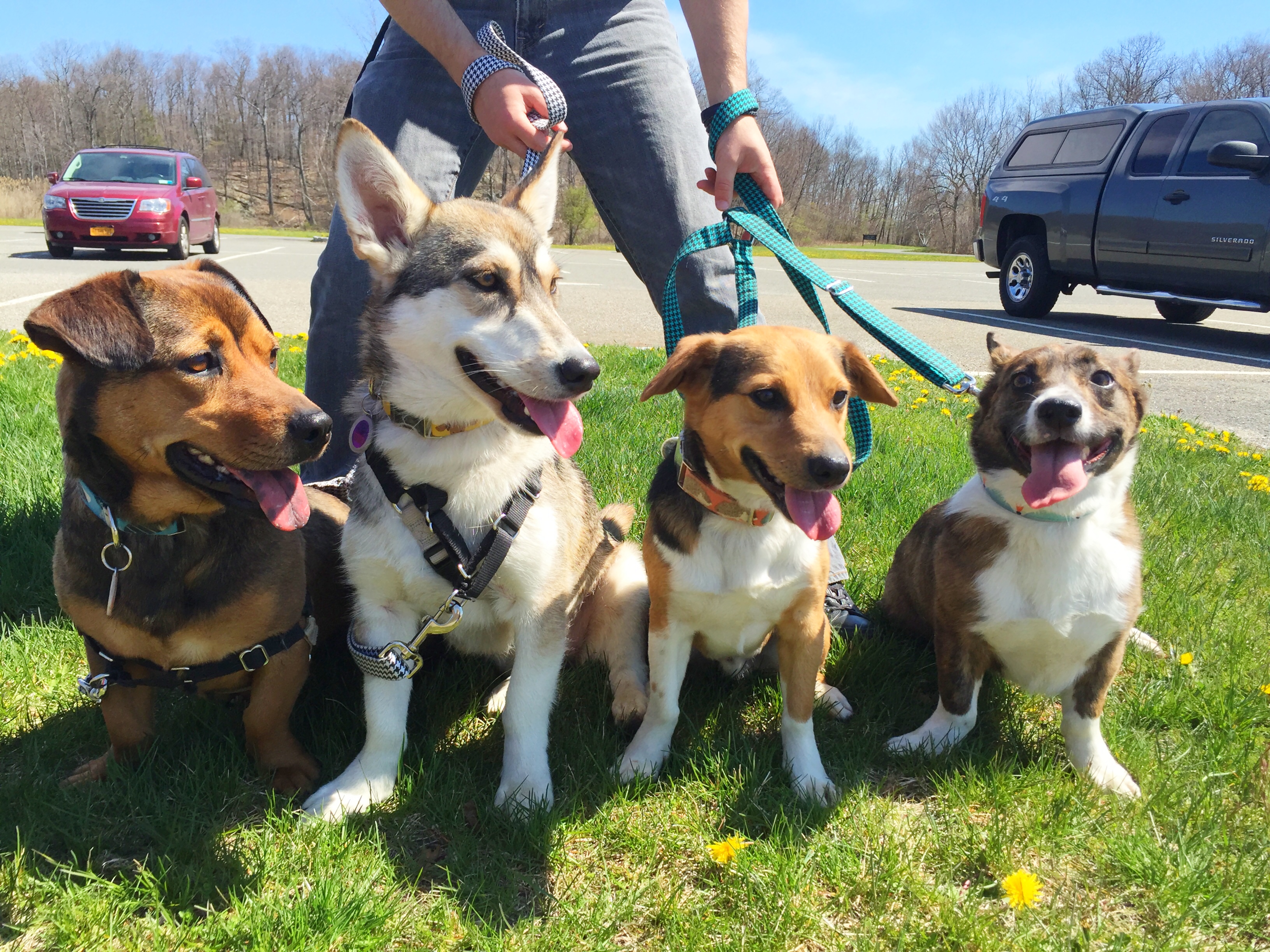 The Dundons adopted Chai from North Shore Animal League of America on June 6, 2015, during their annual Pet Adoptathon event. They were entertaining the idea of adopting another furbaby, so Mocha could have a partner in crime, but didn’t expect to pick him out that day. 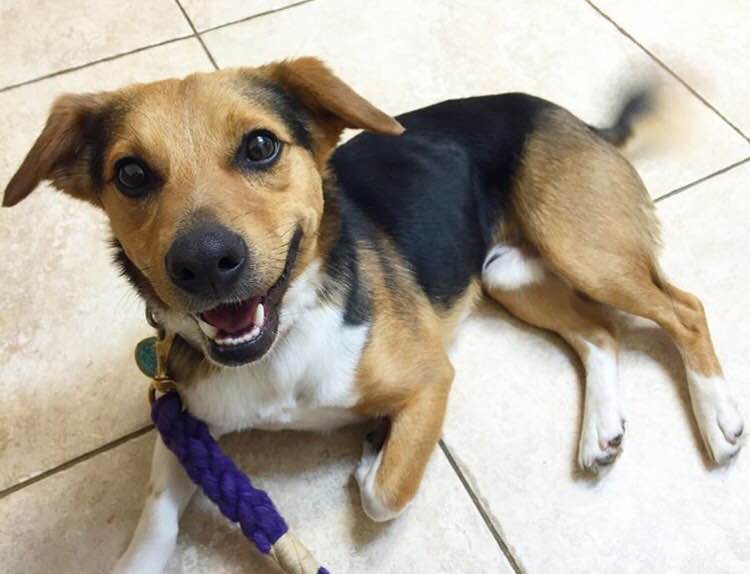 They were browsing through all the adoptable dogs that needed forever homes, and saw him cowering on the other side of his kennel. ‘Nathaniel from Tennessee’, the shelter had labeled him. Good with dogs and kids. They locked eyes, and it was love at first sight! Chai’s tail wagged and he came right over as if he knew, too. They petted him for a while, but continued their trip around the kennel. They couldn’t forget him, so they circled back to his kennel and asked a shelter volunteer for a private meet and greet. Just as they did that, another potential adopter came over claiming he was hers. Luckily for the Dundons, she wasn’t a pre-approved adopter either, so they got to meet him first and that was that. He jumped onto their laps and they knew they had to bring him home. 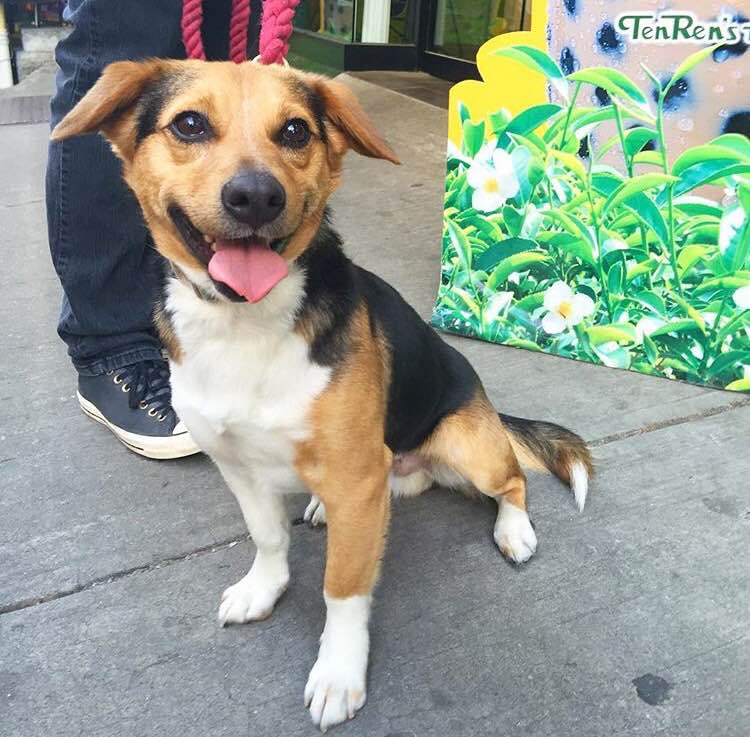 Chai became their first “oops” baby and they’ve loved every moment of it. Because they didn’t think they would be actually adopting another dog that day, Mocha wasn’t there to meet her new fur-sibling to test temperament or compatibility. Things got even more complicated when the Dundons were told that Chai had kennel cough. The shelter gave Chai medication and asked his forever family to keep the dogs separated. They did just that, and after 3 weeks and 4 trips to the vet, Chai was declared healthy. Chai and his family went home triumphant and introduced the two (finally!) on a causal neighborhood patrol. They watched them carefully as the two interacted in their fenced in yard. Much to their surprise, Mocha and Chai began playing with one another almost immediately, as if it was completely natural! They have been bonded ever since.

The Dundons now know that even though we thought it was love at first sight, Chai really loves everyone he meets and turns into a big baby when any sign of affection is involved. He’s there as soon as you make eye contact. His butt never stops wiggling. 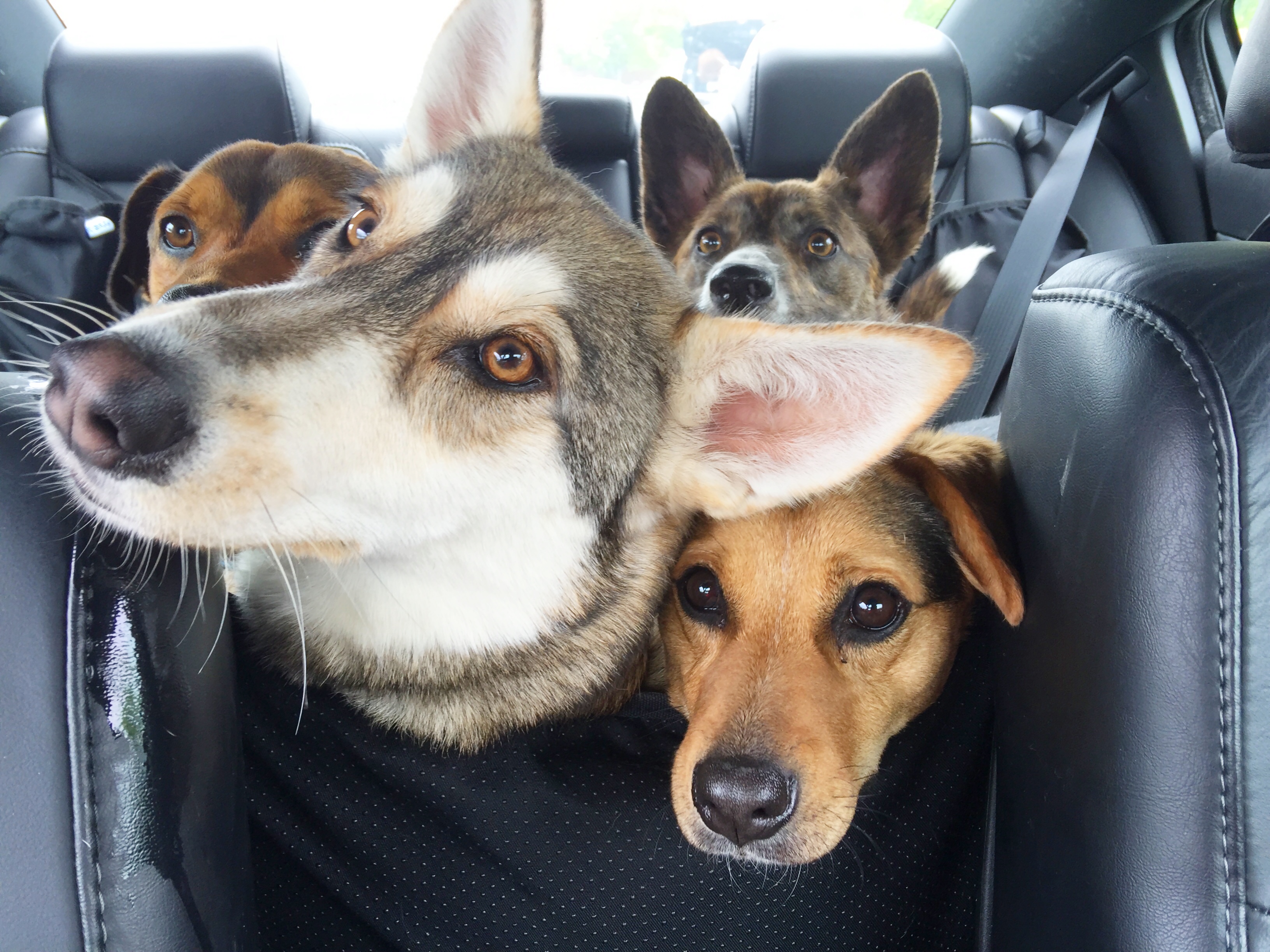 In October 2015, The Dundons decided that it was time for another furbaby, and they began searching for adoptable Corgis. They quickly came across ‘Carly’s’ profile on petfinder.com and became very interested in her, but she was located in Texas. They weren’t sure at the time that the adoption would actually go through, given the distance and prior rejections with different rescue groups. They weren’t completely oblivious to the rightful concerns of the rescues. Corgis can be temperamental creatures with high prey drive and potentially nippy habits. They already have rescue animals and may not be able to do meet & greets. 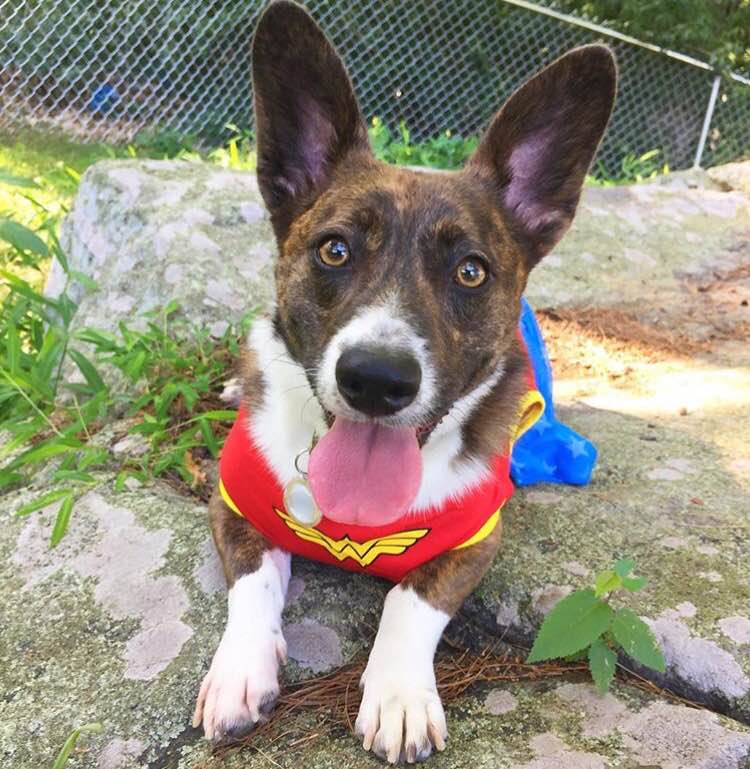 Despite the initial setbacks, the wonderful Corgi and Critters NET Rescue Inc. continued to work with them on Carly, who would soon become their ‘Toffee’. They flew to Texas on February 14 and drove 4 hours to meet with her and her foster family. They were really nervous but as soon as they saw her, they knew it was meant to be! She came right over and has loved them ever since. 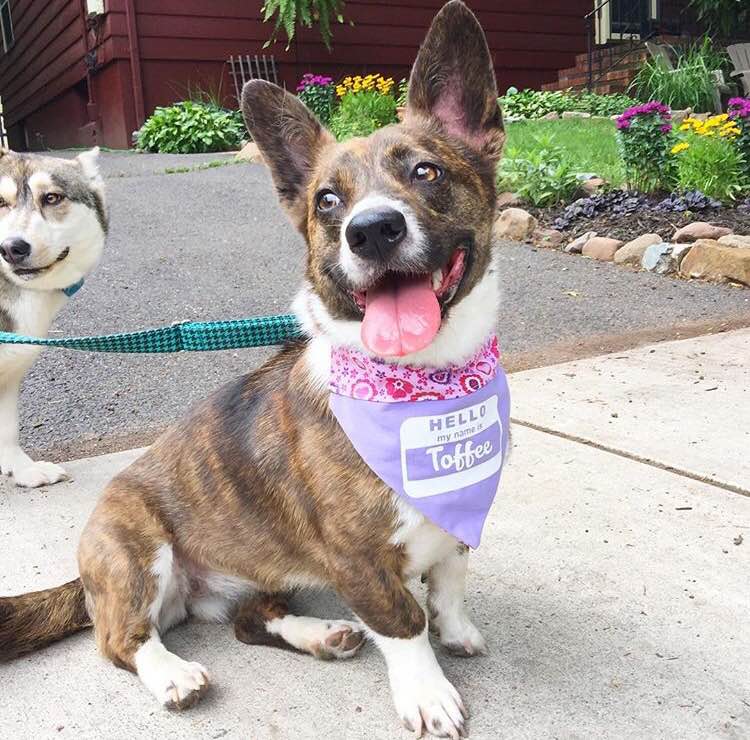 Carly was originally a breeder puppy that got dropped off at a shelter. Even though she was only 1.5 years old, she’s already been returned 3 times since then. The Dundons were warned that she would become their “problem child” because of her bossy nature. So far, she’s been nothing but great and graduated basic obedience without any problems. She can be stubborn, but this wasn’t anything new to her forever family. She fell in line with Mocha and didn’t try to usurp the alpha position. When she’s not too busy being the fun police, she always lays at her family’s feet and follows them everywhere – a true velcro dog!! She became and will always be the best Valentine’s Day present! 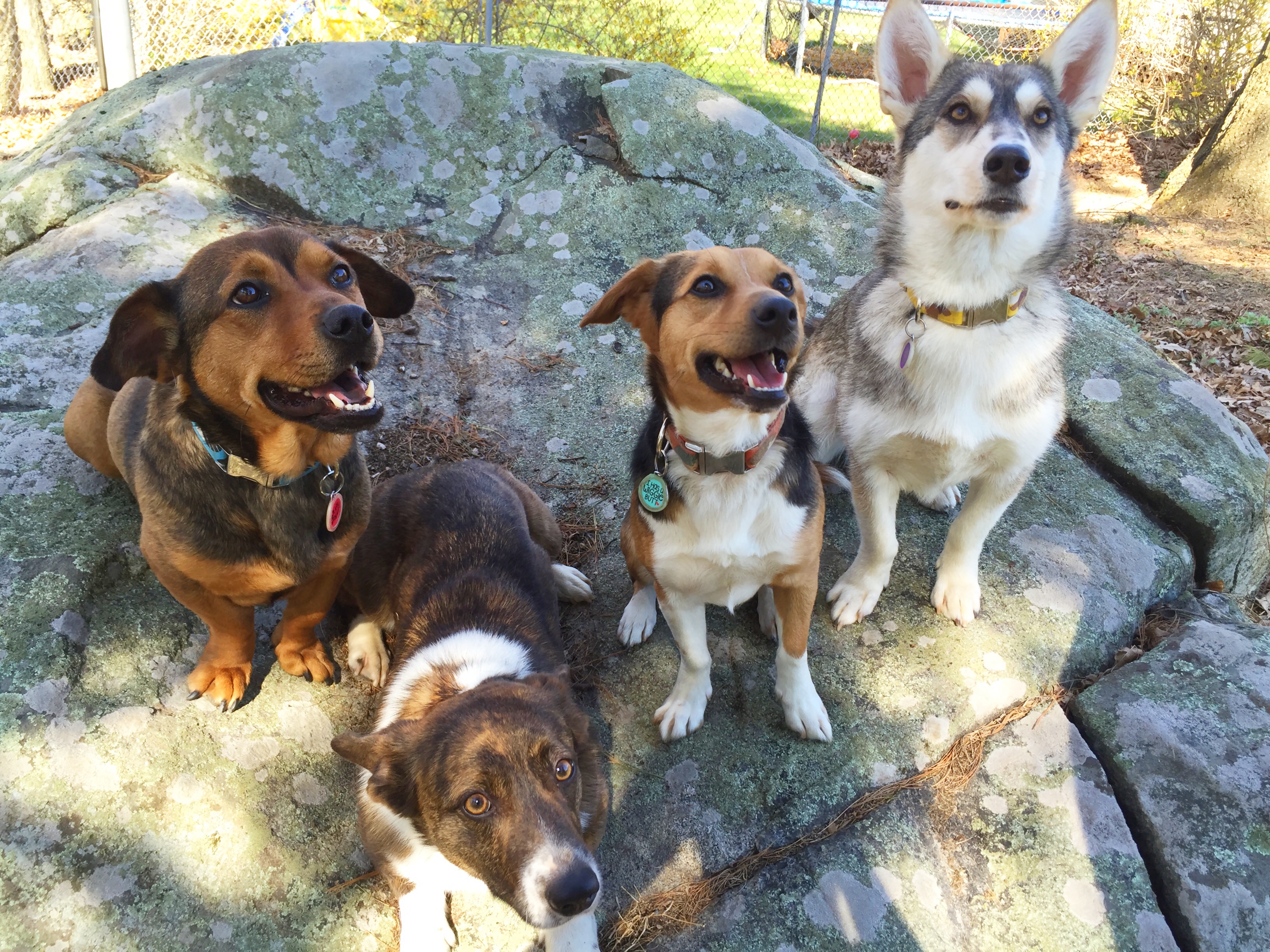 On January 27, 2016, The Dundons came across a video on Celtic Corgi Rescue‘s Facebook page that would change their lives forever. It was a video of an adorable husky corgi mix named ‘Astrid’. She was young, great with other dogs, and extremely playful. They knew immediately that she was special. The rescue group didn’t know much about her, just that she was young and picked up by a good samaritan as a stray. 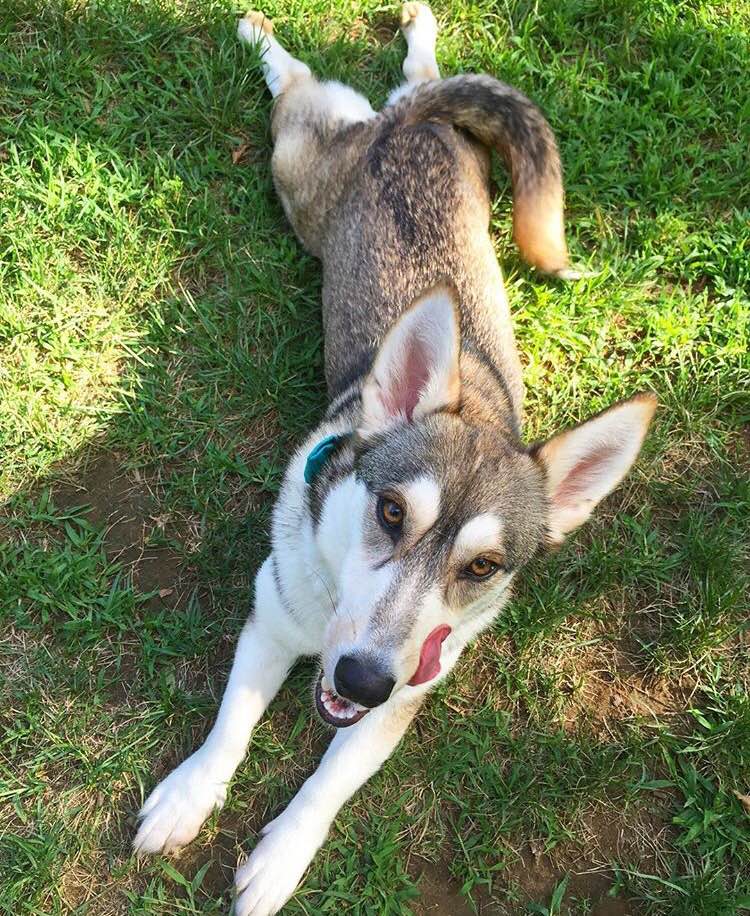 With the help of some amazing volunteers with the Corgi Coalition Transport Team, Astrid and a fellow corgi were transported from Oklahoma to the North East. When The Dundons met her for the first time on Februrary 29, she dug her nails into the ground and cowered away. Luckily, that only lasted a few seconds because she quickly took a treat from her new family and flopped over to her side for belly rubs. Her integration with the rest of the pack was instant and completely natural. One minute she was sniffing butts and the next, she was romping and playing with the others across the yard.The Dundons are so proud of what Peppermint has become. She has made such great progress in becoming more comfortable. During the first few weeks, she was terrified of being touched and flinched at every movement. She was sometimes so nervous that she would pee all over herself. Now, she’s a total love bug and will wedge herself between seats, so she can lay her head on a human family member. She also tends to be the instigator of the house and  “talks” nonstop to get the others to react. 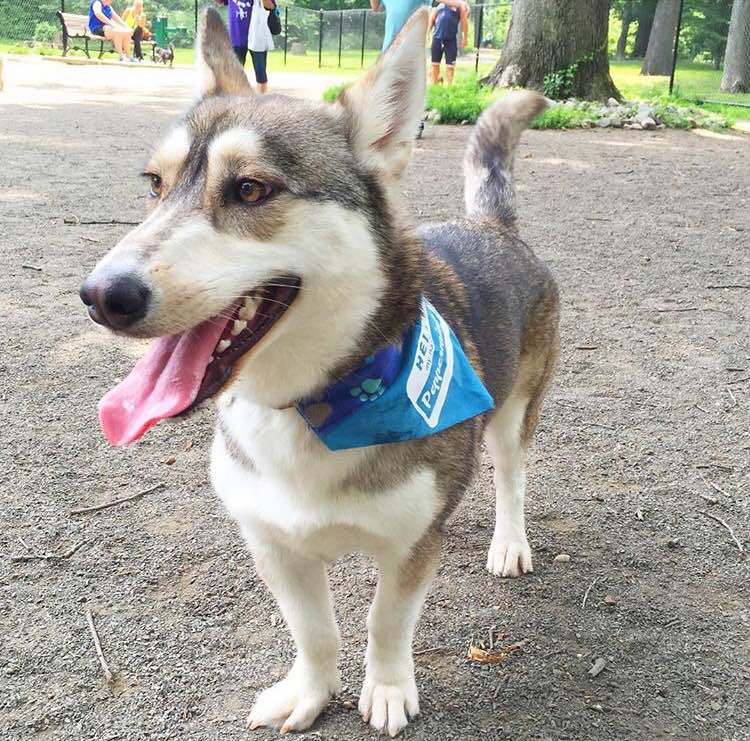 The Dundons cannot say enough about how blessed they are to have their rescues and would do everything all over again. Snuggling with their furbabies (dogs and cats) on the couch at the end of a stressful workday is absolutely the most gratifying feeling. 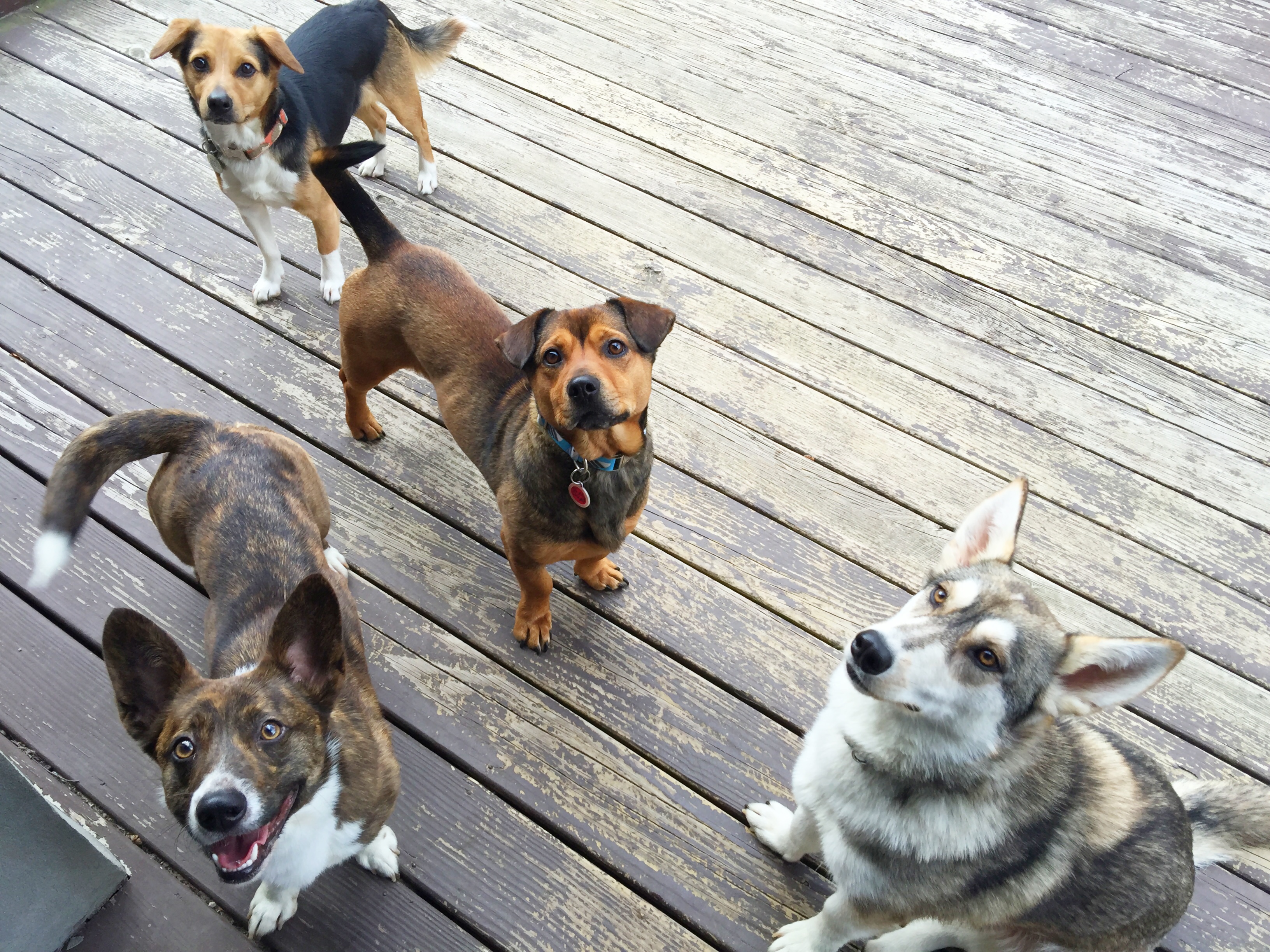 Follow Mocha, Toffee, Chai and Peppermint (aka The Stumpy Brigade) on @barkspicepuppuccino

Where is my feast hooman? #blackcatappreciationday

Happy adoptiversary Mocha!! You’ve had one heck of a year this past year. Two surgeries and cancer scare, we’re so lucky to have you with us. You’ve taught the hoomans so much about us doggies. Can you have them make steak again? – Chai ????❤️

I can feel my life force shedding away. Put it back! #shedmonster

Waiter, my bread stick is stale and the cat loaf is burnt! #internationalcatday

Can you make the rain go away pleeeeease? ⛈☔️

Toffee: There’s something growing out of your ear… Chai: What? Check out @beaus.bows and their pawesome #bbbfallmodel contest ????

Toffee: Pepper, not now! Mocha & Chai: Get a room.

Last week of the #coneofshame!! ???? No more lame jokes such as “the satellite is down, call the Internet company” or “call the ghost busters! It’s a moving lampshade” or “the signal tower shorted out” ????

Working on my summer tan ☀️

…and she whale be loved ❤️

We had a blast with the @frappack today!