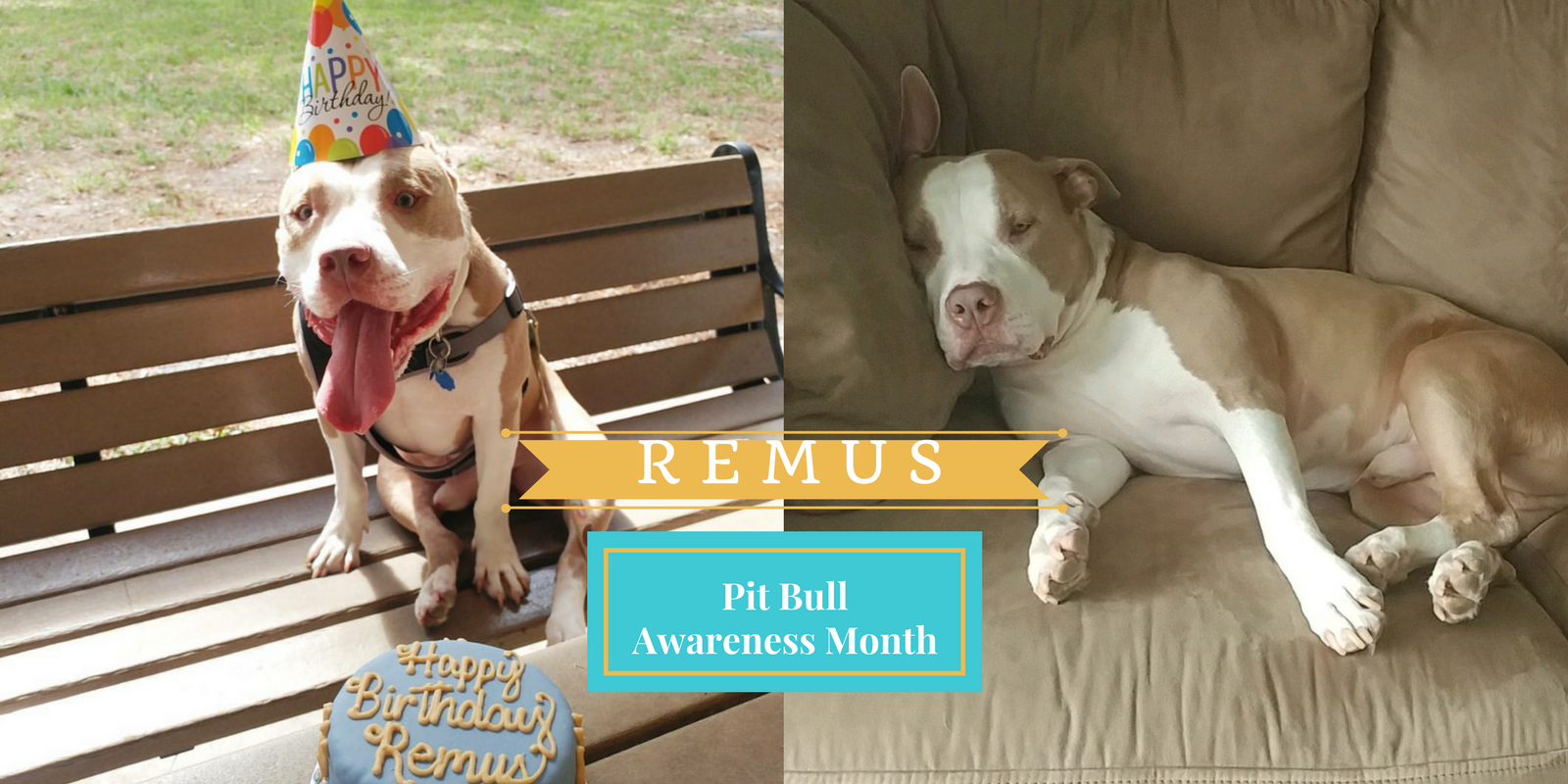 Remus is a five year old Pit Bull who found his forever home on August 24th in 2016. Remus’ mom, Julie, adopted him from the Halifax Humane Society in Daytona Beach, Florida. 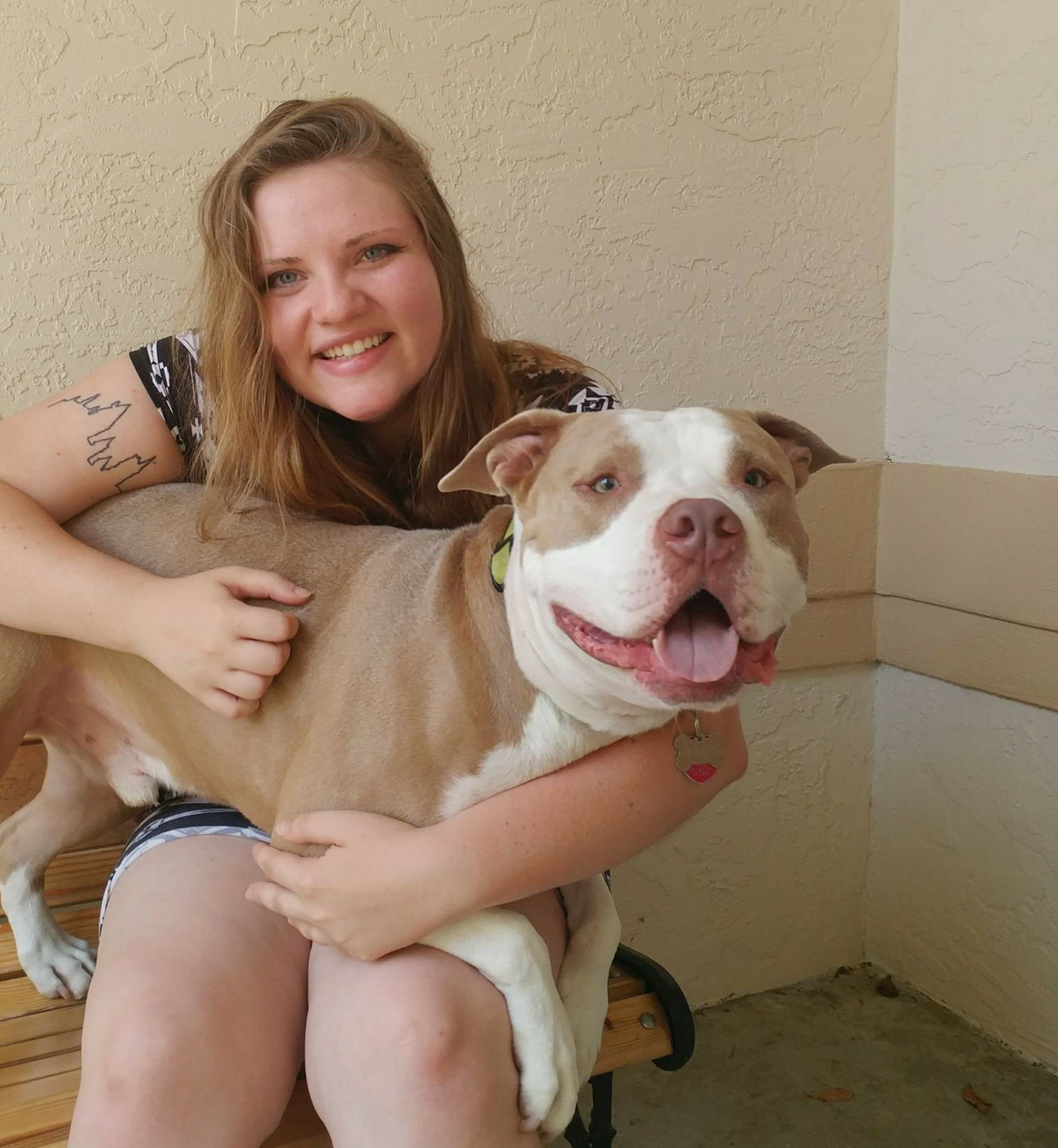 Julie went to the Humane Society in hopes of finding a small dog for her mom. Upon walking in, she was of course heart broken at the number of dogs in need of a home, but she was even more saddened by the large number of the Pit Bull type dogs, specifically. 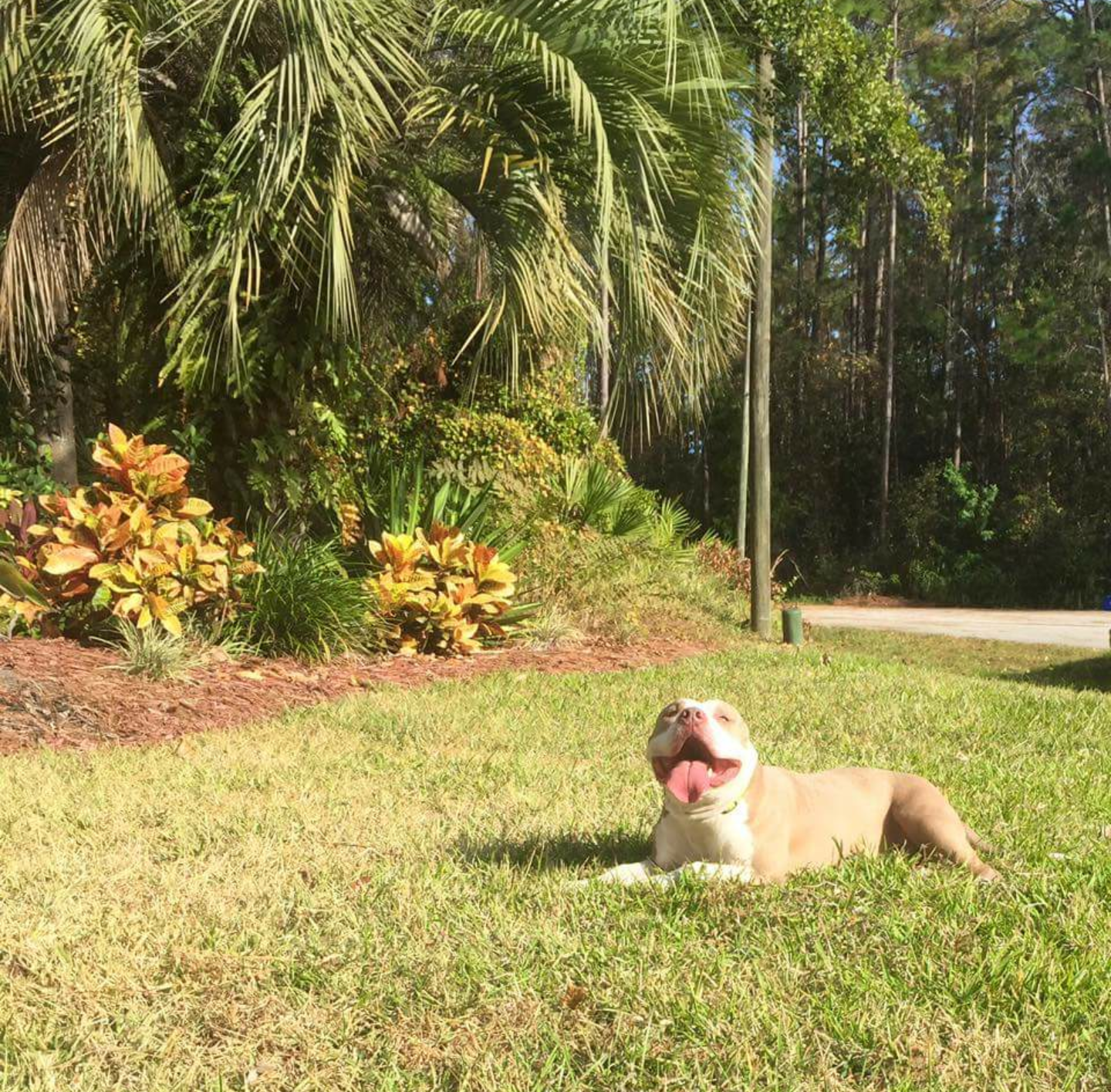 As she was walking along the rows of dogs, she thought to herself, “I want my own dog. And no matter what he is named, I am re-naming him Remus.” (Julie is a massive Harry Potter fan.) She continued her walk, and saw that there was a dog already named Remus….what are the chances!! There he was, a sweet, big, doofy dog! He had the largest head than any other dog by far. She asked to take him for a walk so she could get to know him and discovered that he was an absolute dream! 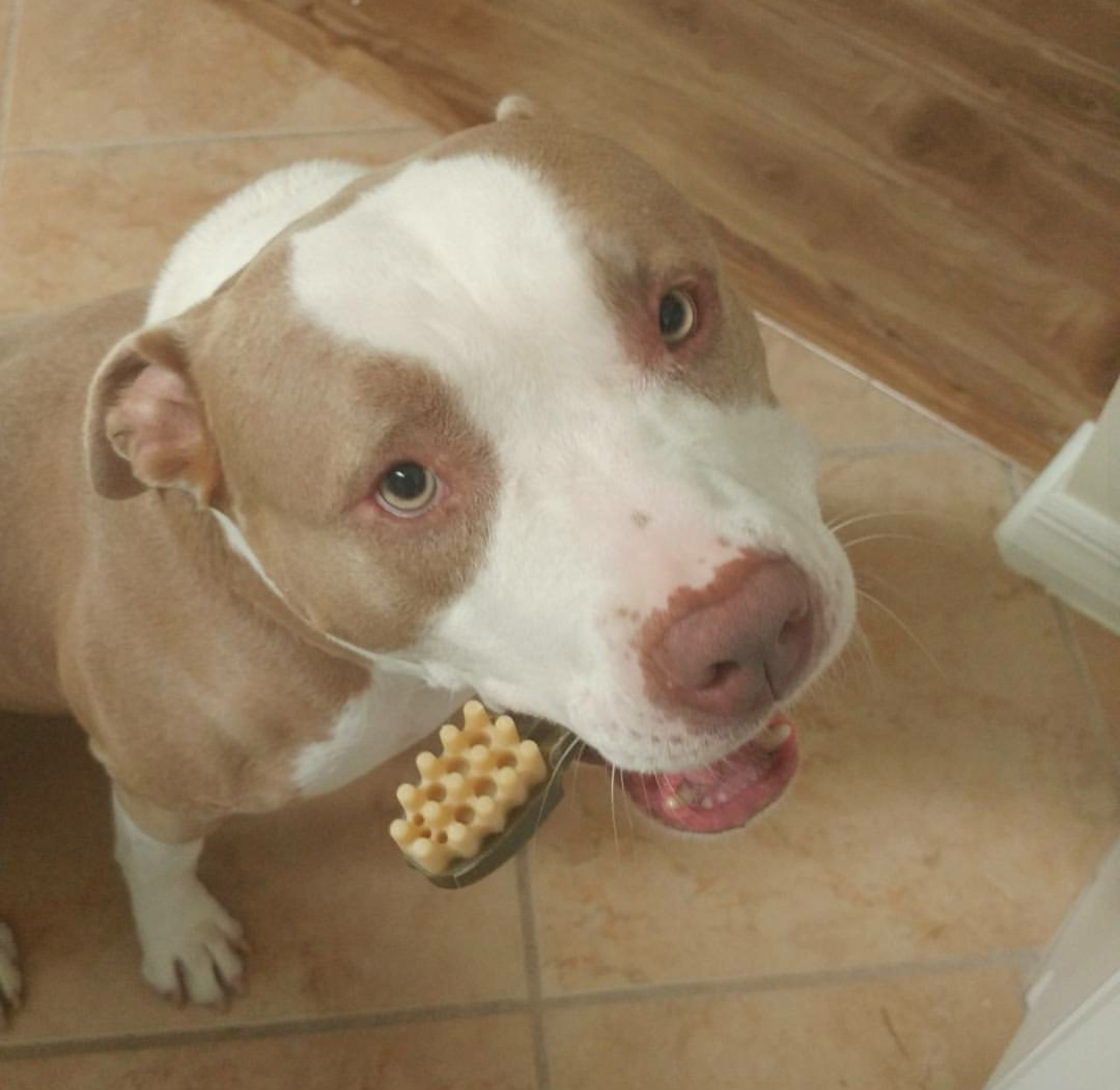 In order to fill out paperwork, he had to go back in his kennel. He tried so hard to fight the handlers on going back in: he laid down and gave them the big puppy eyes that screamed “please no, not back in there!” The finally picked him up, carried him in and he held out his back paw, preventing the gate from being closed. It was his saving grace, having that one paw sticking out.

Julie knew in that moment that he was the dog for her. She took him home, gave him a bath, and over time, helped him gain back the 20 lbs that he was missing. In the past year, Remus has brought her more happiness than she could ever fully express. She is so thankful that she found him. 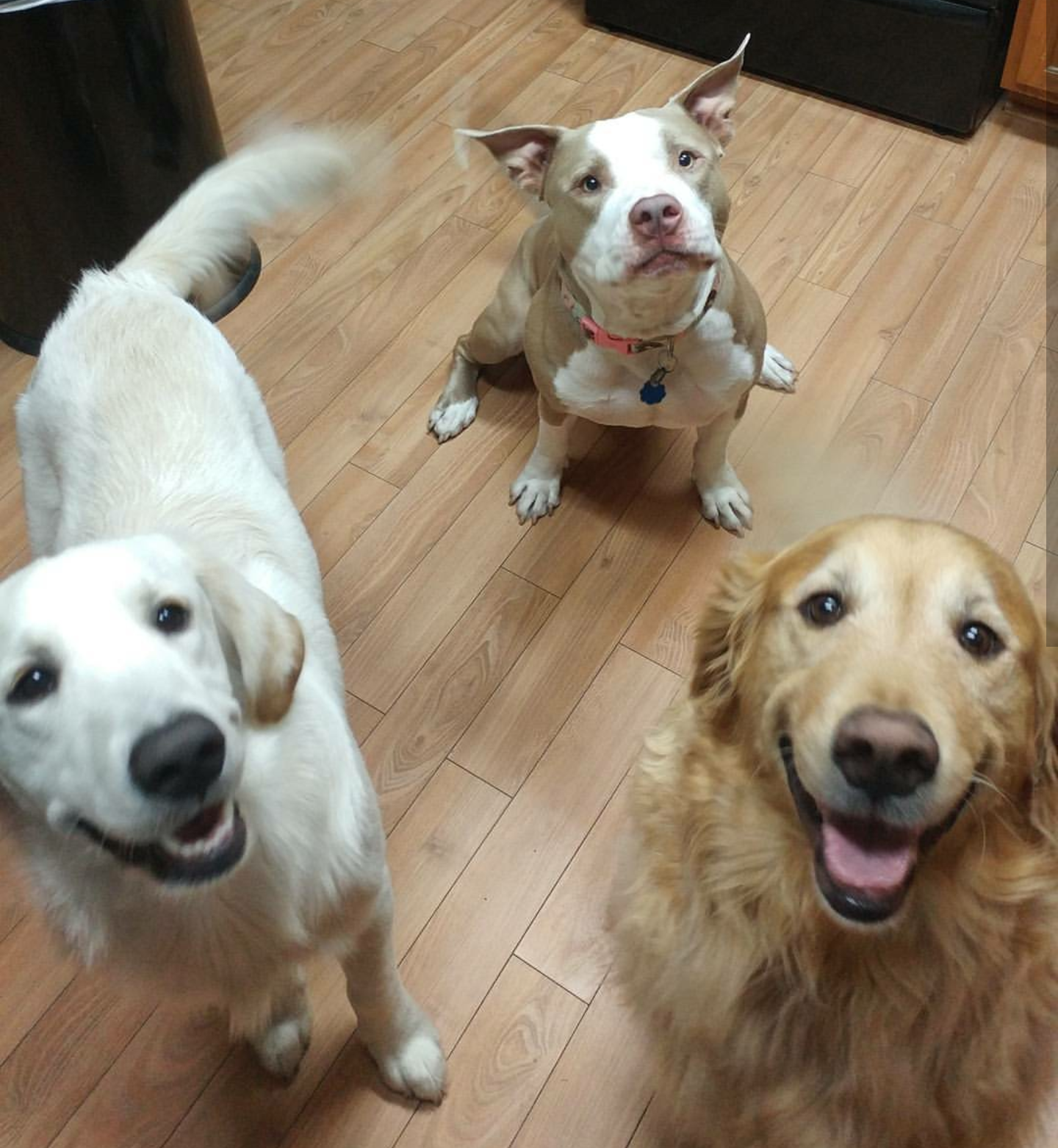 Julie had never had a Pit Bull before him, but now she will never own another dog that ISN’T a Pit Bull.

A post shared by Professor Remus John Lupin (@theadventuresofremusjlupin) on Oct 30, 2017 at 11:29am PDT

A post shared by Professor Remus John Lupin (@theadventuresofremusjlupin) on Oct 6, 2017 at 8:24am PDT

A post shared by Professor Remus John Lupin (@theadventuresofremusjlupin) on Sep 16, 2017 at 11:38am PDT

A post shared by Professor Remus John Lupin (@theadventuresofremusjlupin) on Sep 13, 2017 at 5:04am PDT

My mom always shrieks at me and tells me I am the cutest whenever she captures pictures like this… Must be the ears? #BURT #dog #puppy #puppydog #love #adoptdontshop #adopt #adoption #rescue #rescuedog #shelterdog #woof #pitbull #pibble #pitbullsofinstagram #americanstaffordshireterrier #americanstaffy #dontbullymybreed #cute

A post shared by Professor Remus John Lupin (@theadventuresofremusjlupin) on Aug 12, 2017 at 7:10am PDT