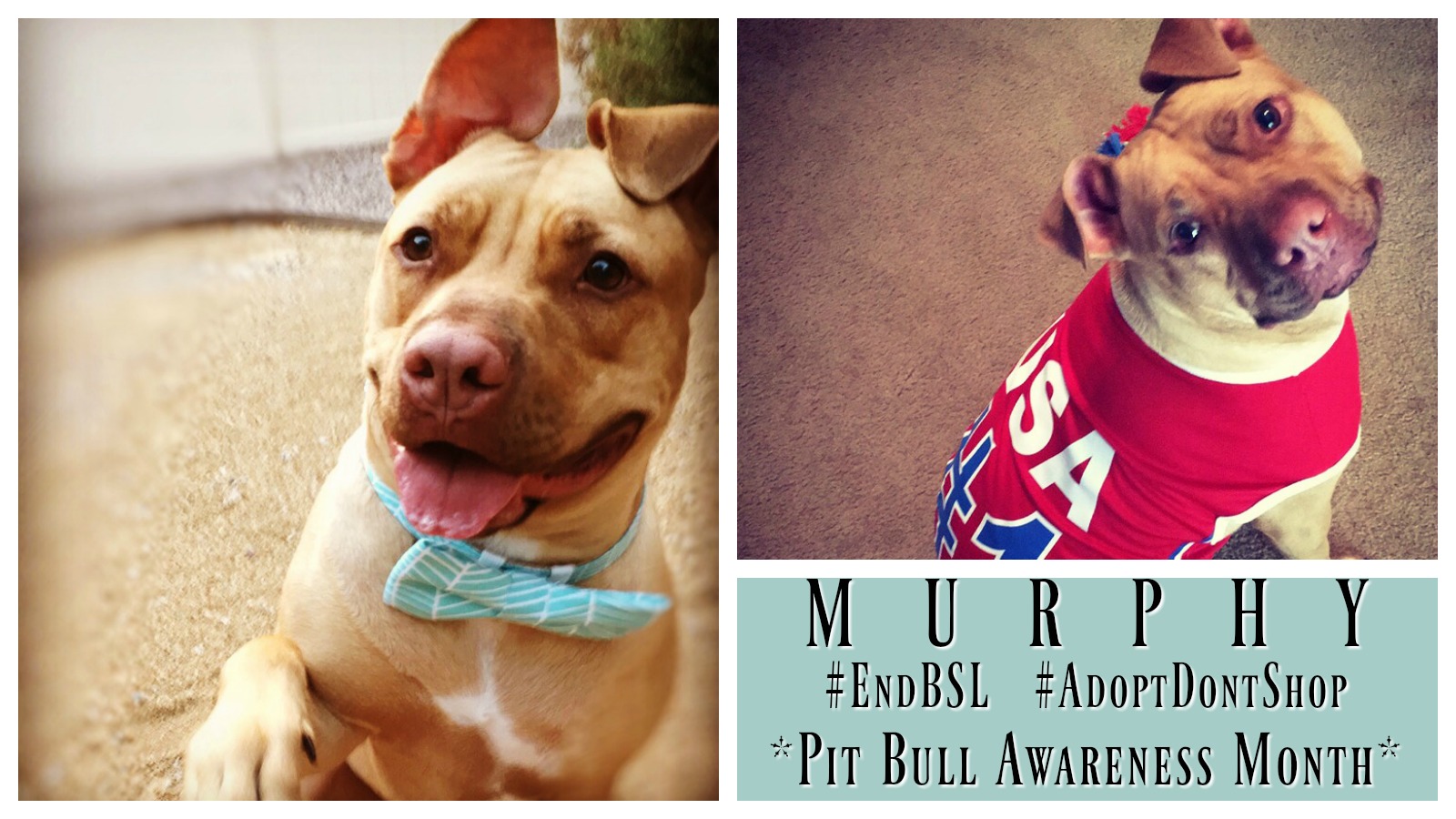 Hi! My name is Murphy, and this is my story…

I wish I could tell you how I got to the shelter, but I can’t talk yet. I’m working on it though. I was in the shelter starting from my puppy days and because I’m so cute, I was adopted quickly…named Chop, and then the family who took me home returned me to the shelter after only a week. That happened two more times! The last home kept calling me “Tank Jr. ” and I didn’t like that very much.  Because my personality is so sweet and I couldn’t hurt a fly, I was entered into the Animal Network – Las Vegas and got to move out of the shelter and into Camp Bow Wow. I liked it there because the people were nice, but the noise and activity was exhausting. I also lost a bunch of weight. All my ribs were showing and I couldn’t get comfy on the ground. I overheard the people saying I didn’t have a lot of time left and I was getting pretty nervous. 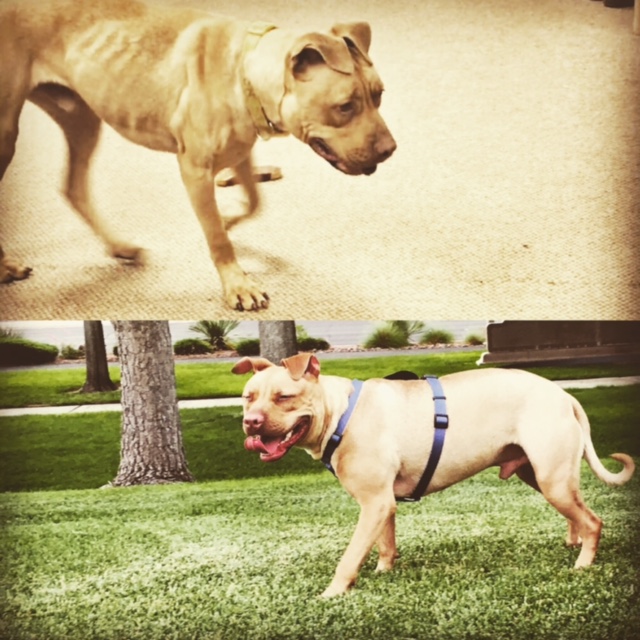 I moved to Las Vegas, Nevada with my lab/ pit-bull, Olivia, almost a year ago. In May, she died unexpectedly from an aggressive tumor located on her heart. I didn’t think it would be possible for me to ever get out of bed again, not to mention adopt another dog. But, I knew what Olivia would want me to, so I looked for a dog who was unwanted, like she was. I saw “Tank Jr” on Petfinder and called to inquire. They told me he was still available and had just been returned after his third attempt at an adoption. I went to meet him and spent an hour on the floor trying to gain his trust. He was very distant and didn’t know what I was all about, but he loved the treats I brought him! And then in a brief moment he decided to give me a chance. He walked across the room to me, kissed my cheek,and rolled over and into my lap. I was smitten. 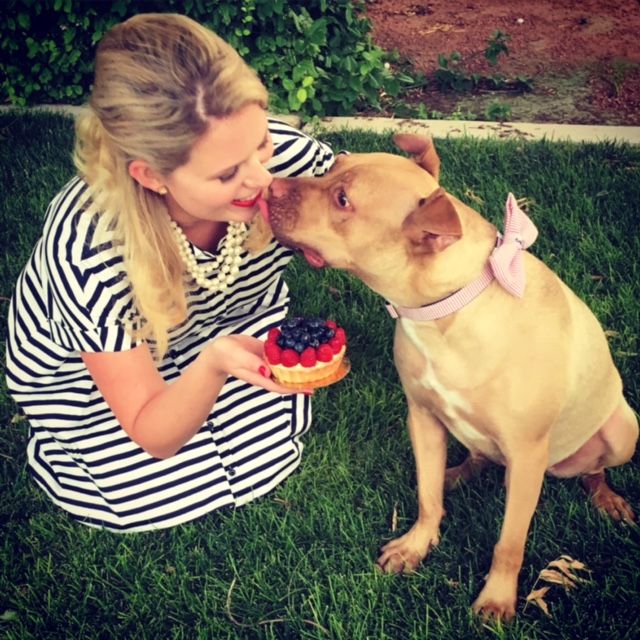 Murphy REALLY enjoyed gaining his weight back and is the happiest dog. He went from one scoop of bland dry food to homemade food. He is pretty quirky and I have to imagine it is from being abandoned so many times. He has so much joy and has the sweetest temperament. He doesn’t bark (except for at the mailman), walks perfectly on a leash, and minds his manners. His personality couldn’t be more different from Olivia, but I know she is so happy another unwanted dog got a happy ‘tail’. I can’t imagine why anyone would give Murphy (or Olivia) up, but I’m so glad they did so I could have him. 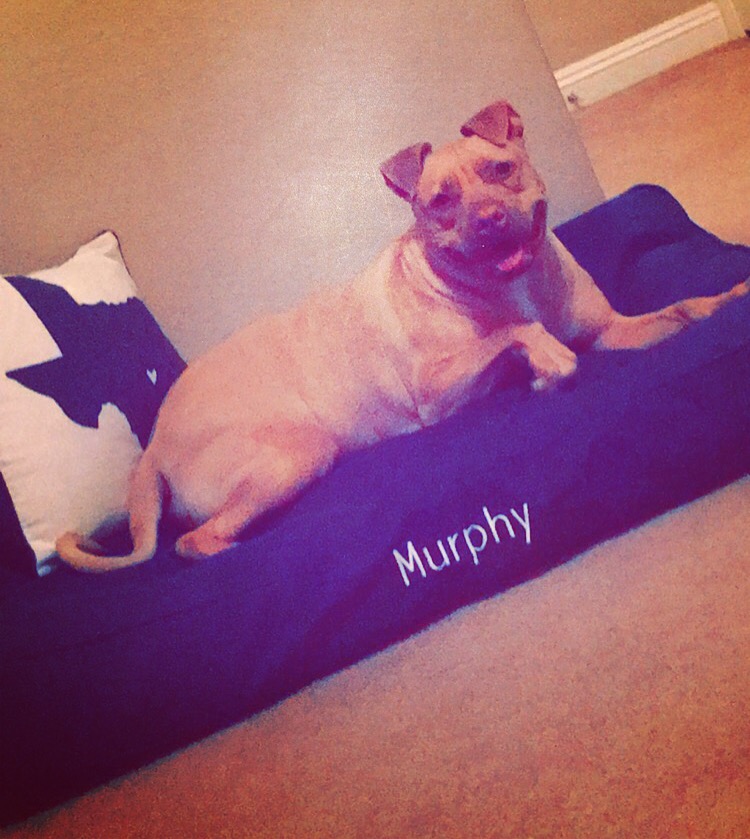 Also, his name comes from Lt. Michael P. Murphy – Navy SEAL who gave his life during Operation Red Wings. I searched for several weeks for a good strong name and was re-reading Lone Survivor. Lt. Murphy sacrificed himself in service and in a very real way, Murphy helped to save me after losing Olivia. 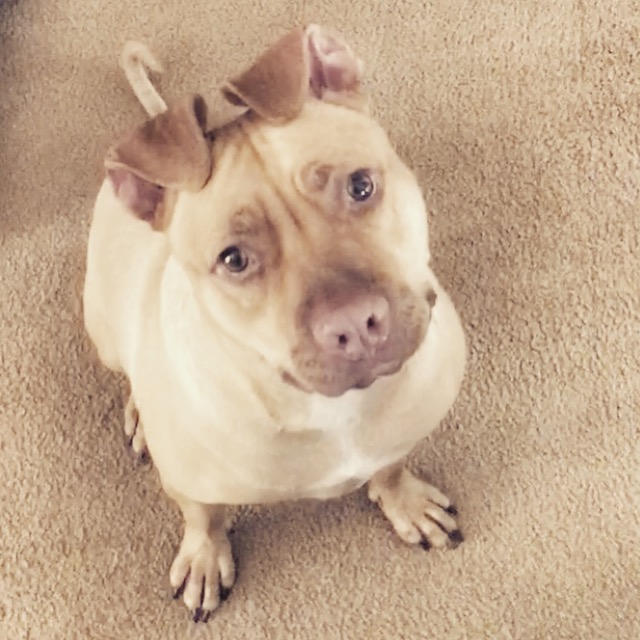 Um, no, I haven’t seen a bone around here. #camo #stogie

I absolutely pawistively did not unmake the bed. It was the cat. Wait, we still don’t have a cat? MOM we need a cat. #innocent #guiltydog #blamethecat

What if we didn’t go to work today? #askingforafriend

Is now a good time to put the clean sheets back on? Even if it’s not a good time, can you do it now? #laundry

Mom, I really feel like it’s my turn to drive. #backseatdrivers

Thinking about @shakeshack and how you shouldn’t have eaten those cheesy fries and now you’re questioning everything about life. #deepthoughts #dilemma #cheesyfries #fries #barkpost #huffpostgram #buzzfeed #buzzfeedanimals

What do you call a dog with a Rolex? …. A watch dog #dogjokes #punny #dogpuns #lol #laughing #laughter

Already exhausted by the thought of tomorrow being Monday. #sundaynight #mondaymorning

Note to self: I look good in a bow tie. #houndandlife #houndbazaar