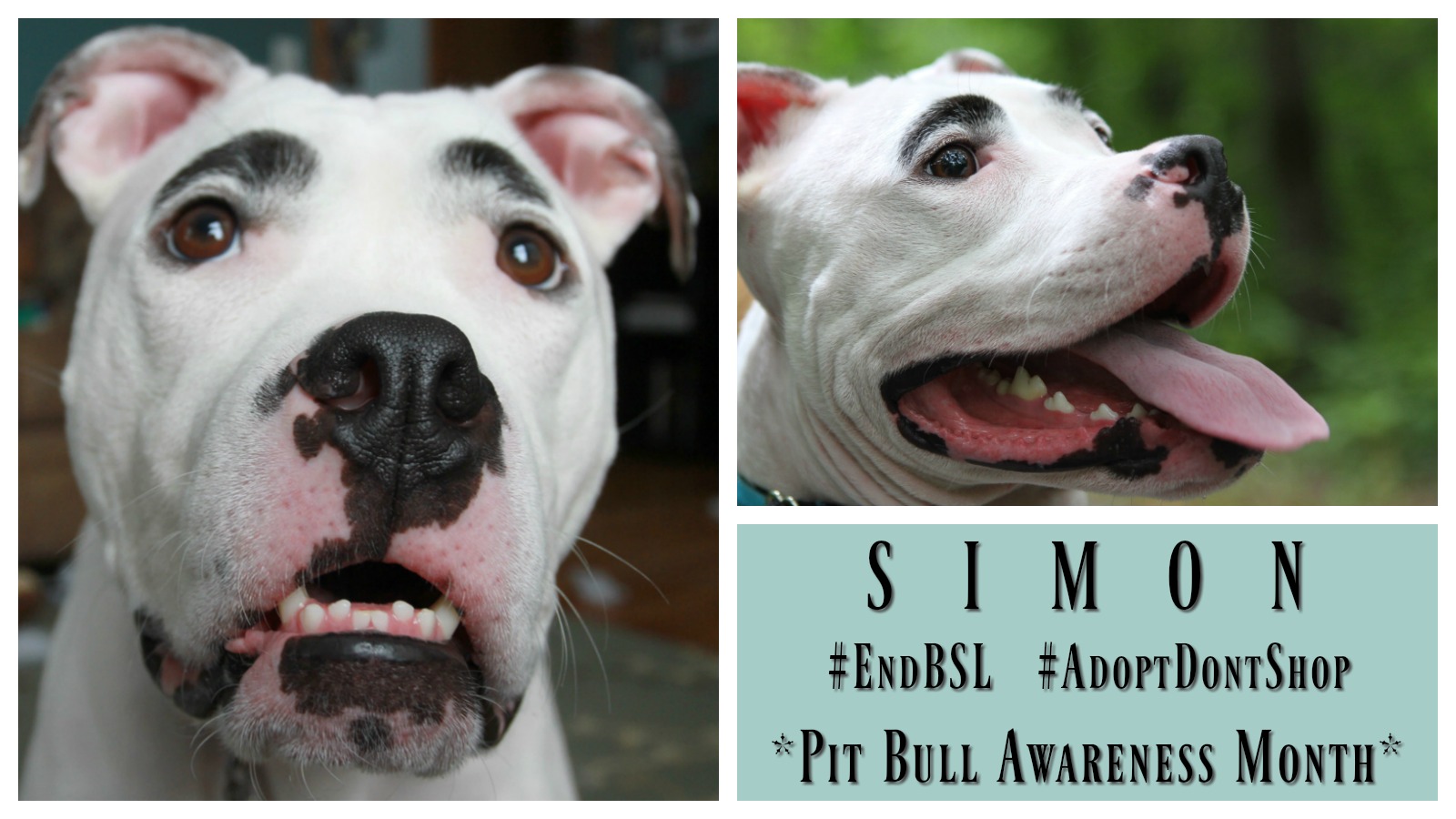 After completing the adoption of her very first foster dog, Kane, Stephanie was determined to succeed at this idea of fostering and get a dog adopted to a home other than her own.  As she looked through pictures on the Secondhand Hounds website, something caught her attention.  She leaned in toward her computer to see if what she was looking at was real.  “That dog has eyebrows,” she mumbled. 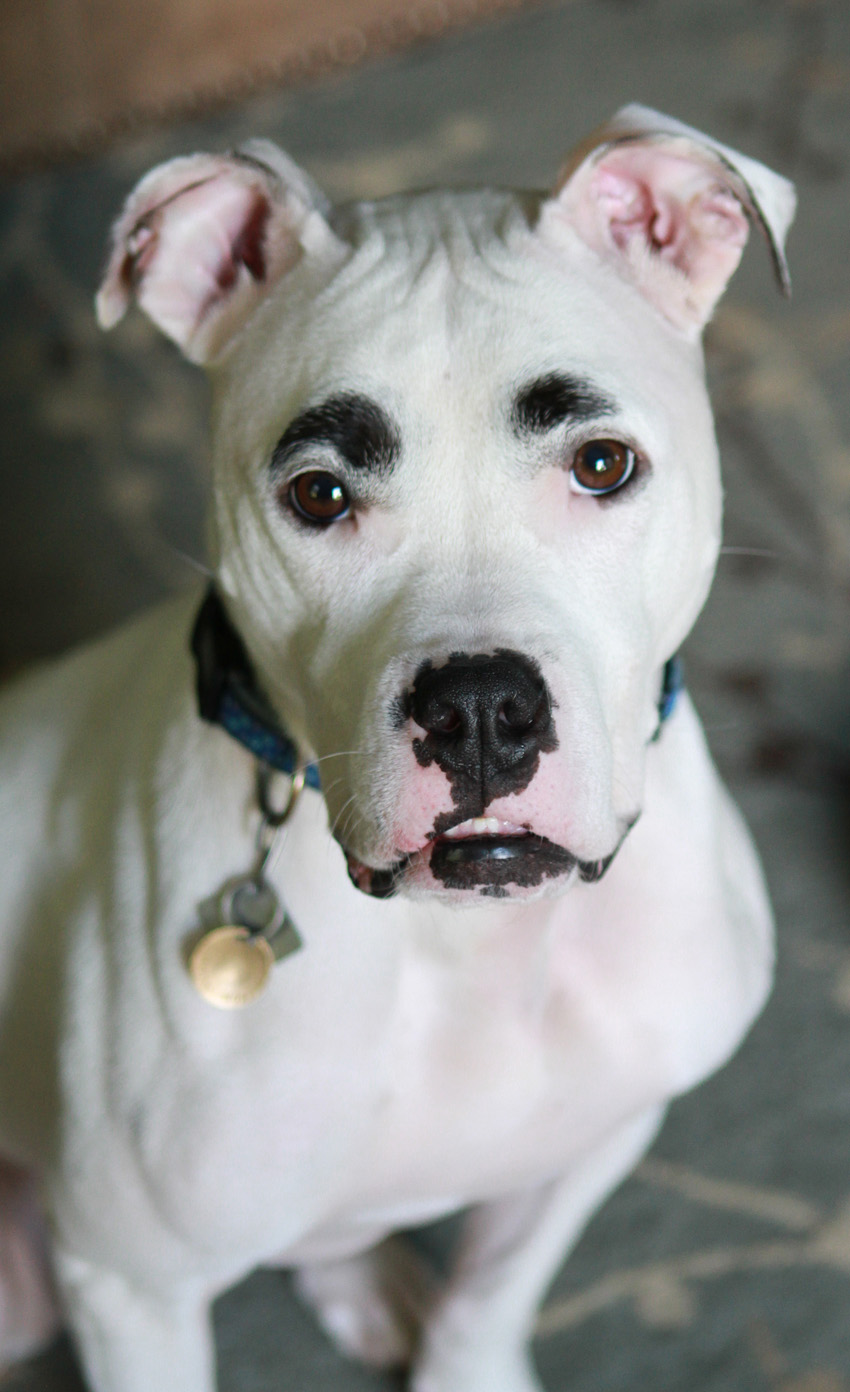 There he was. This goofy looking white dog with a large pair of black eyebrows.  A friend and fellow dog foster, Kristy, had also seen him.  Kristy and Stephanie decided to try co-fostering this strangely marked dog.  Kristy picked him up from the Secondhand Hounds office. 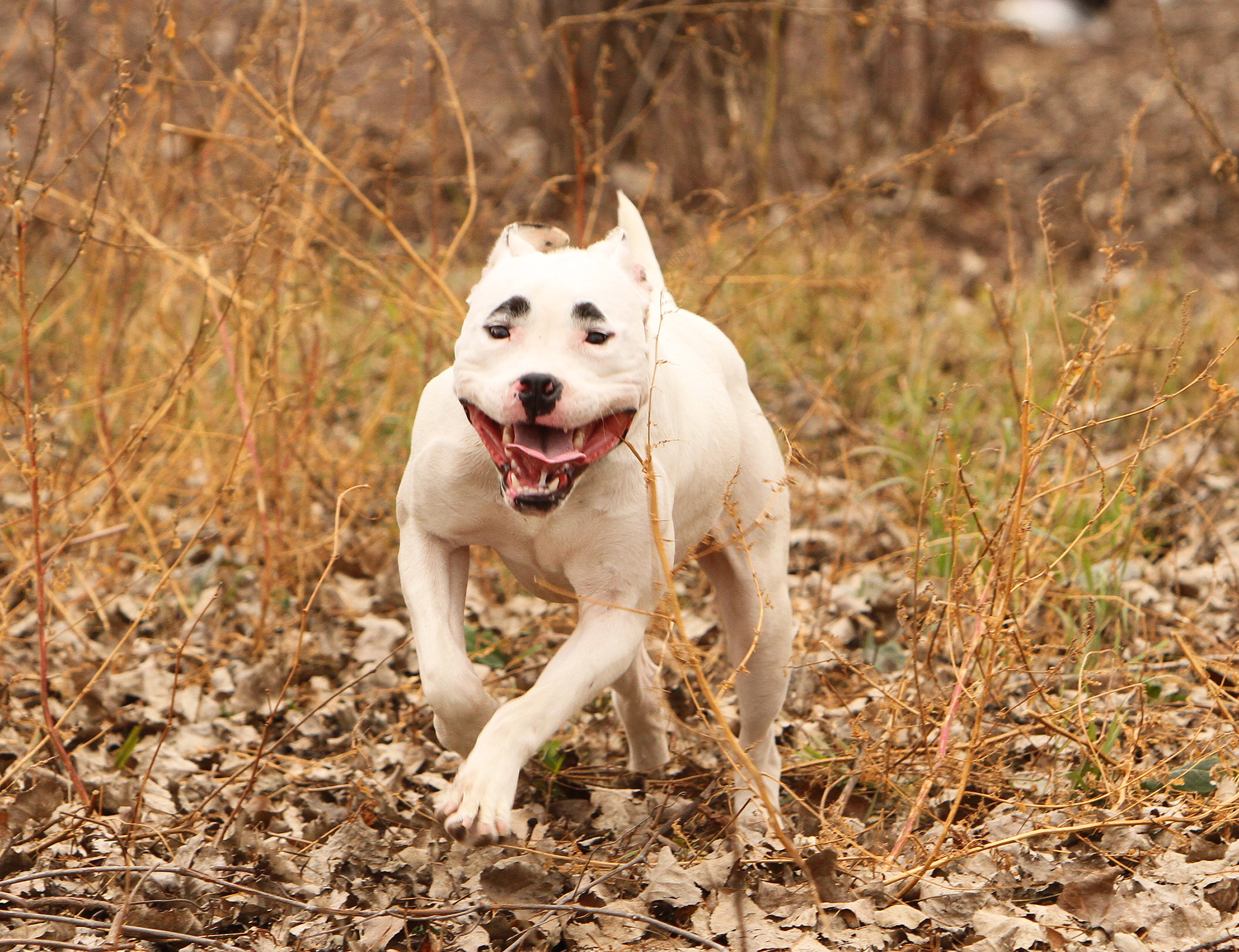 He had quite the story, too.  He was one of a littler of thirteen pups born at Animal Control.  He, his litter mates and his mother were all within minutes of being euthanized when the pups were only six weeks old.  Secondhand Hounds made it to animal control just in time and loaded up all of the pups and their mother.  There was a rule that had to be followed before the dogs were allowed to leave.  They had to be named.  The volunteers that saved his litter named all of the dogs after different types of cheese.  They were known as the “cheese pitties”.  Simon’s original name was ‘Swiss’. 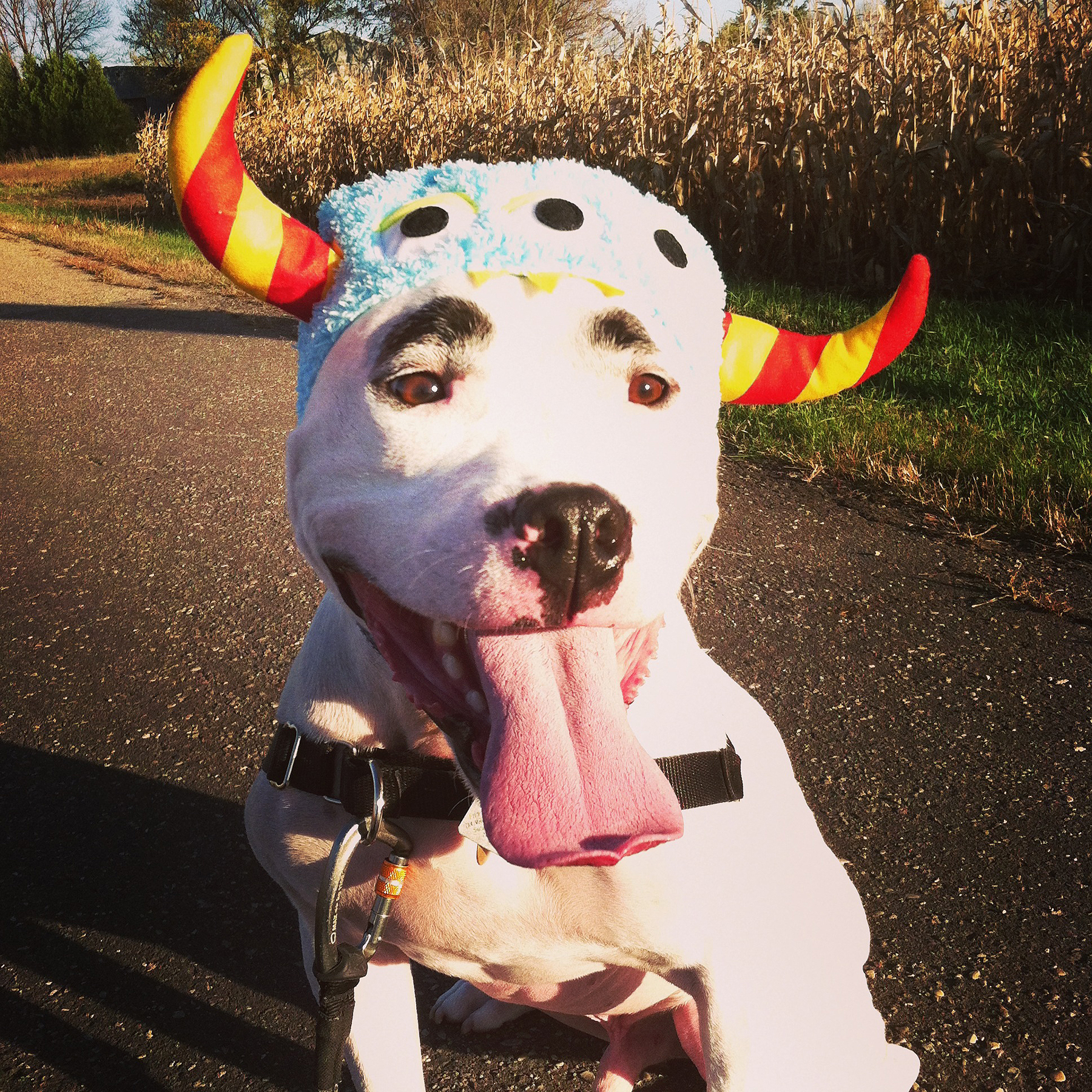 Swiss was returned by his previous adopters due to a housing situation.  But there was something else about him.  He didn’t understand English.  His first adopters spoke a different language in their home, so Swiss didn’t know basic commands.  He didn’t even know his name.  Kristy had Swiss at her home for the weekend and Stephanie picked him up on a Sunday afternoon in October.  She couldn’t help but laugh at him after seeing him in person.  This energetic pit bull-boxer mix happily rode back to her house with her.  The introductions with him and her other three dogs went well, and Swiss acted like he had always lived there within a couple hours of first trotting through the door. 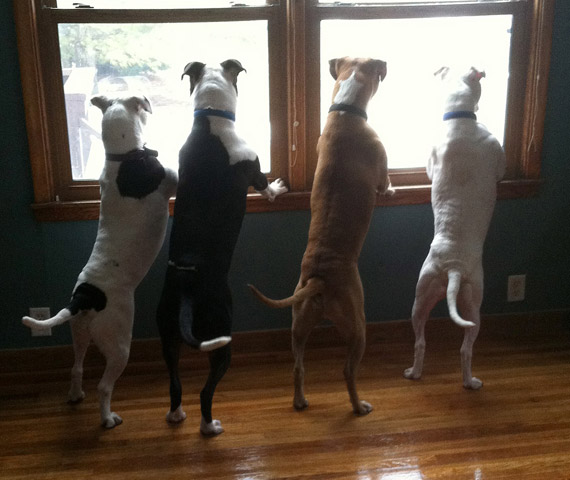 And then he began coughing. Stephanie immediately called Kristy to ask her what was wrong with him.  She said he never coughed at her house, but she heard kennel cough had been diagnosed with several of the dogs in transition from shelters to fosters with Secondhand Hounds.  Several of the dogs had stayed in kennels at the office and had become sick. Stephanie’s thoughts of a quick adoption were fading quickly, since this coughing pup had to be on quarantine for a couple weeks.  Despite bordatella vaccinations, two of her own dogs also became sick with kennel cough.  She had a house full of dogs that sounded like barking seals.

Swiss had a few other traits that weren’t working in his favor.  He didn’t have many house manners.  He’d jump up onto the dining room table, the coffee table, he barked at anything he saw outside, he had accidents in the house and he liked to steal food off of counters.  Stephanie had her hands full trying to keep up with him. Slowly, he began to learn some manners.  And some English.  There were a few adoption applications submitted for him, but a couple potential adopters had cats.  He wasn’t a big fan of small animals. 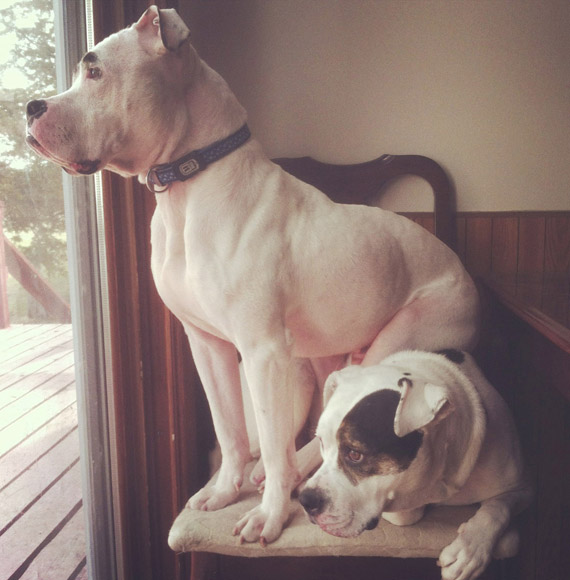 After fostering him for several weeks, Stephanie submitted her own adoption application for him.  She knew she had her work cut out for her to teach this spunky dog some manners, but she was up for the challenge. Since he didn’t really understand his name, she changed it to Simon.  It was a better fit for this quirky, happy dog. Stephanie kept working with him on his manners, and he kept working with his furever mom on her patience.  Since Simon has been adopted, he’s made huge strides in his manners.  He’s a wonderful companion who makes sure everyone knows of his presence.

Good morning! Would you like to be serenaded by my singing skills? I thought so. 🙂 Happy Thursday!

Posted by Simon the Pit Bull/Boxer on Thursday, October 8, 2015

Simon loves water.  He loves swimming, and he loves jumping.  All of these activities have resulted in Simon participating in the sport of dock diving.  Dogs run down a 40-foot dock and jump into a 35-foot-long pool.  The dogs’ jumps are measured based on where the base of their tail hits the water.  Simon has done quite well for himself in the sport.  Most people remember the spunky dog with eyebrows. 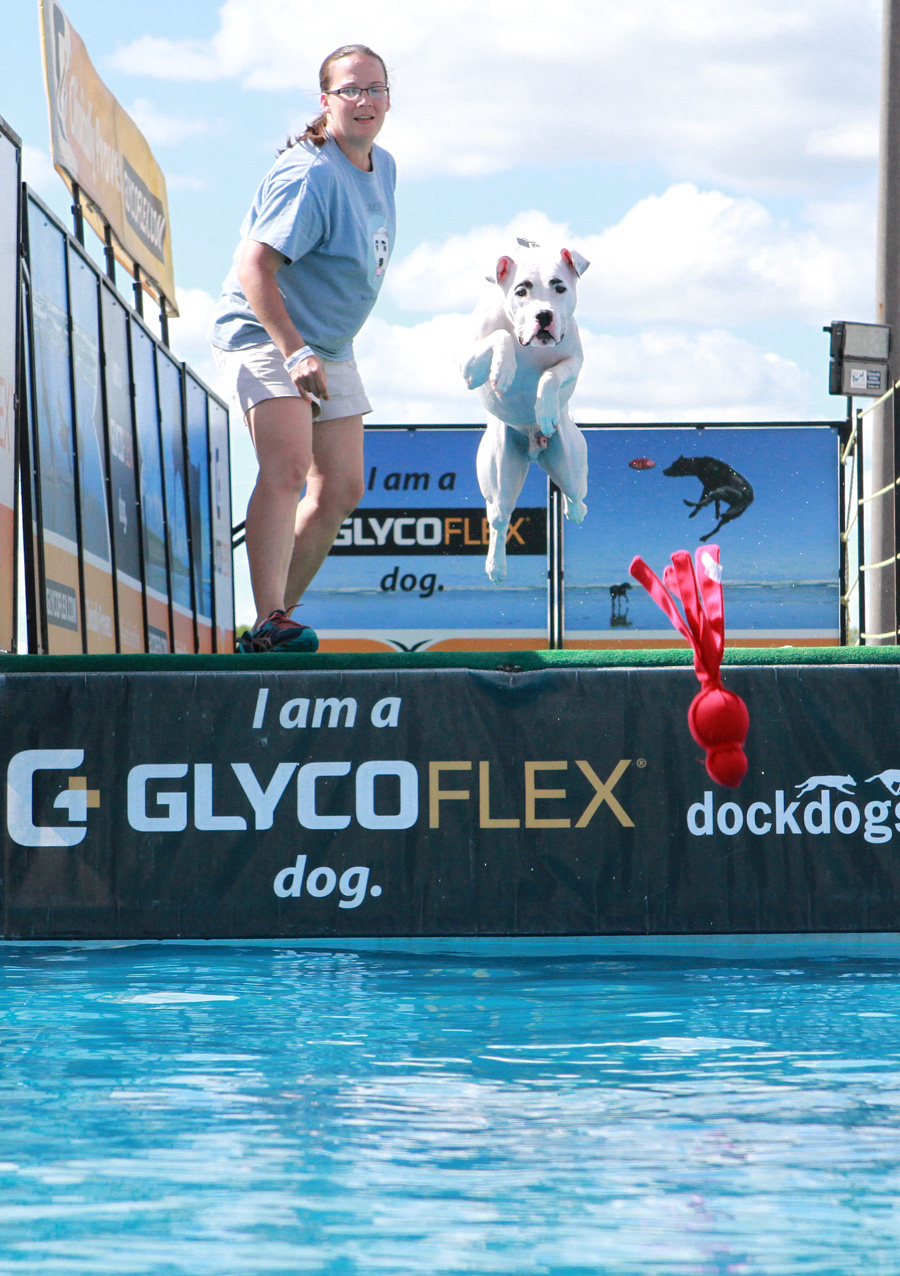 Those eyebrows have resulted in countless conversations with people regarding bully-type dogs.  Simon’s eyebrows tend to draw people in.  People aren’t as concerned about what his genetics consist of; they’re curious about those unique markings.  Simon loves the attention he receives from people.  He’s more than happy to give hugs and kisses.  And if you’ll let him, he’ll gladly go for a piggyback ride. 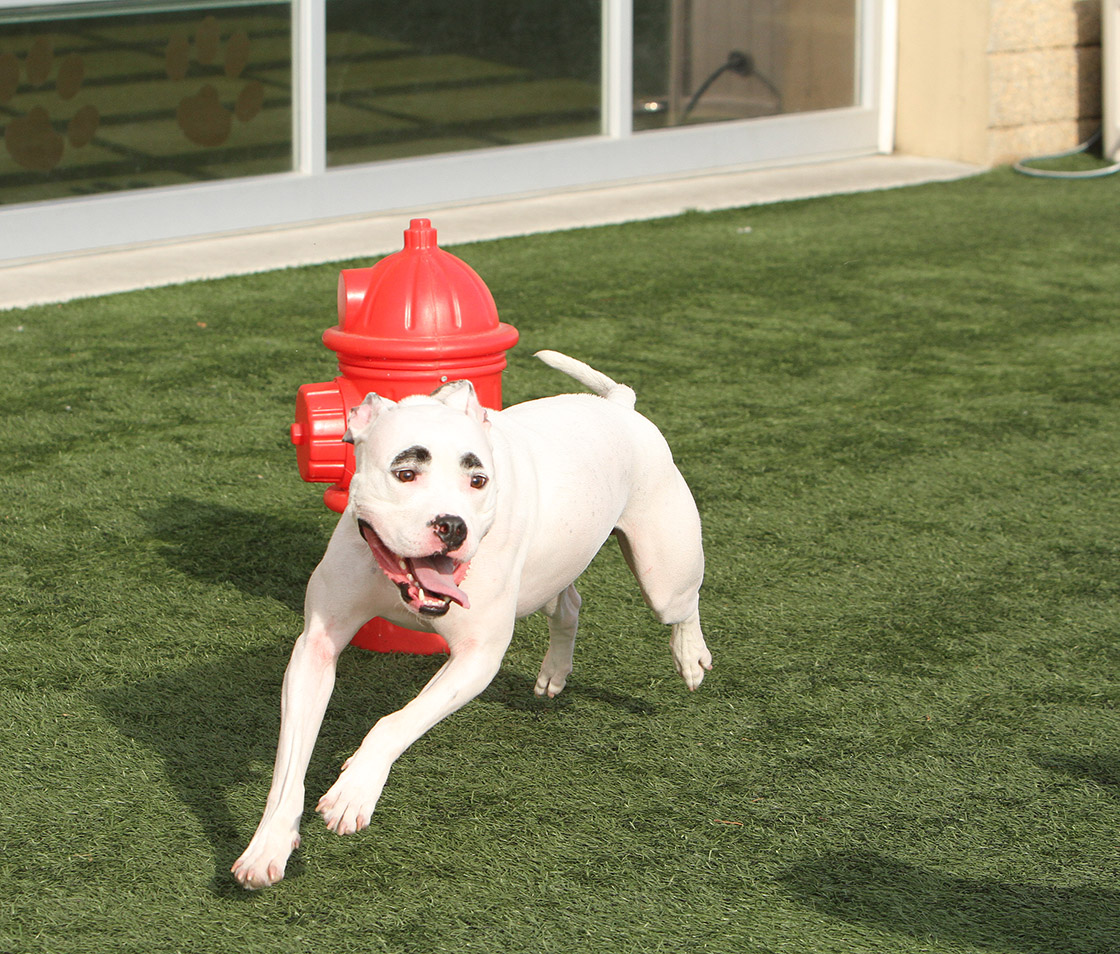 Aside from those handsome eyebrows, Simon is happy-go-lucky, curious, energetic dog.  He has an obsession with tree frogs.  He loves scaring squirrels that may be hanging out on the deck.  He’s alert to people coming and going – even if they’re coming or going from the neighbor’s house.  Stephanie is well informed of anything going on nearby.

Simon is a character.  His personality stretches beyond his eyebrows and freckles.  He’s acrobatic, daring, adventurous, he’s quick, hyper and vocal when he needs to be.  He loves to be close to his mom at the end of the day.  He loves to curl up in a tight little ball and snuggle.  Sometimes he curls up in a tight little ball right on Stephanie’s lap.  And then there’s the underbite.  His underbite is huge. There’s an inch or more of distance between his bottom teeth and top teeth. His underbite doesn’t inhibit his ability to eat or chew up any type of treasure he might find on the countertop.  Often times, he’ll get his top lip caught behind his underbite, so this adorable little row of bottom teeth sticks out and he appears to be grinning. 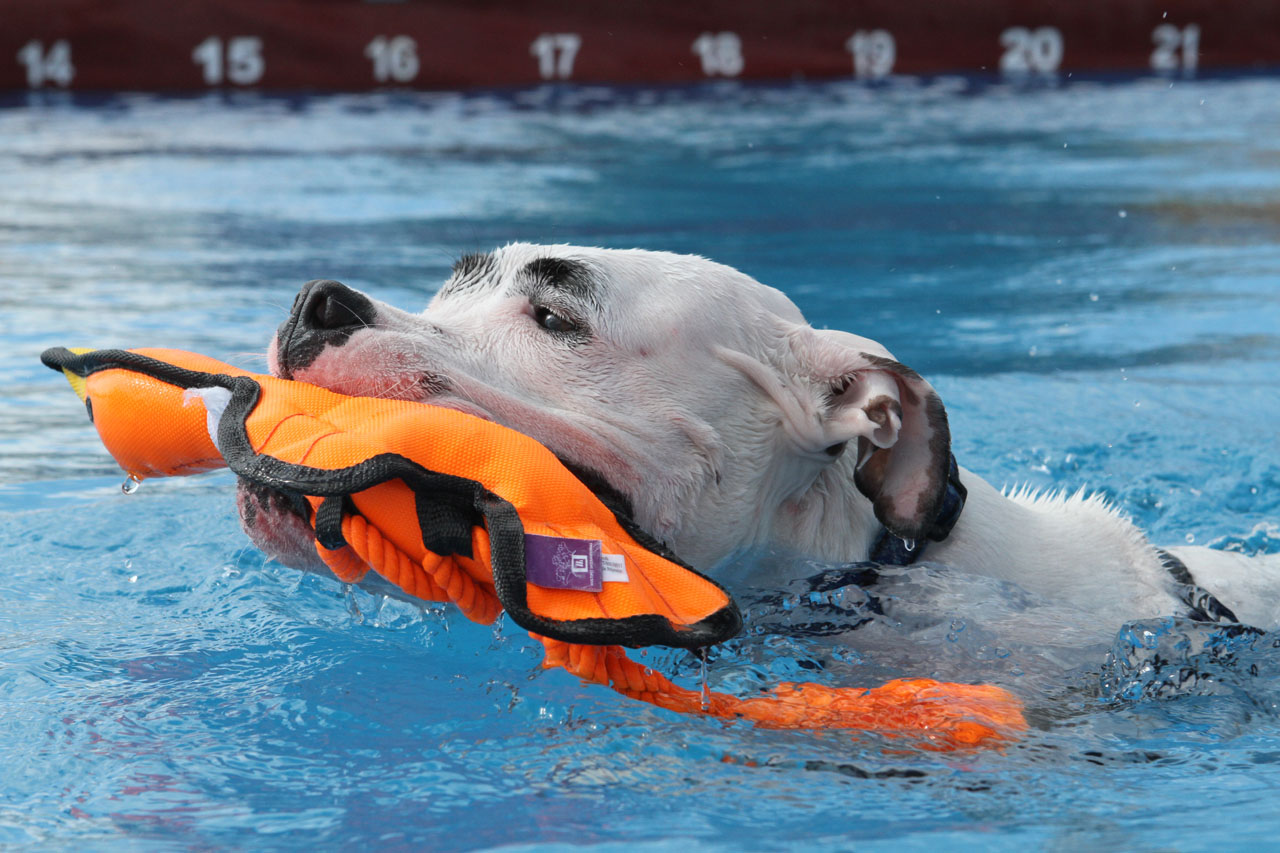 Simon has come a long way since his Swiss days.  He’s not perfect, but he’s perfect for Stephanie and her other dogs.  There’s a unique balance of energy and calm between the dogs.  She’s often asked how or why she have four dogs, but she wouldn’t have it any other way. 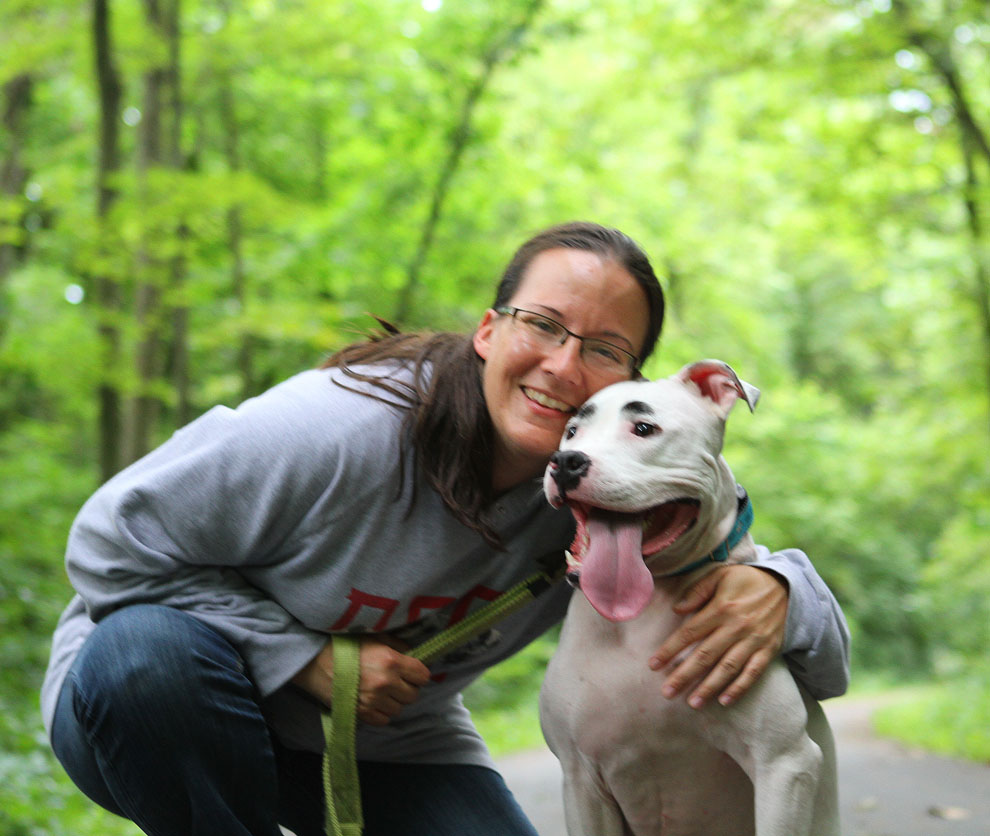 Simon is clearly the most recognized of the group, and Stephanie is proud to be able to share his story with people.  He’s more than happy to soak up the attention he receives.  At the end of the day, he’s a dog.  He’s a good dog.  He’s Simon.  And those handsome brows have opened many people’s eyes to see the positive in what may have been perceived as negative previously.  He’s definitely raised a few eyebrows.  Atta boy, Simon! 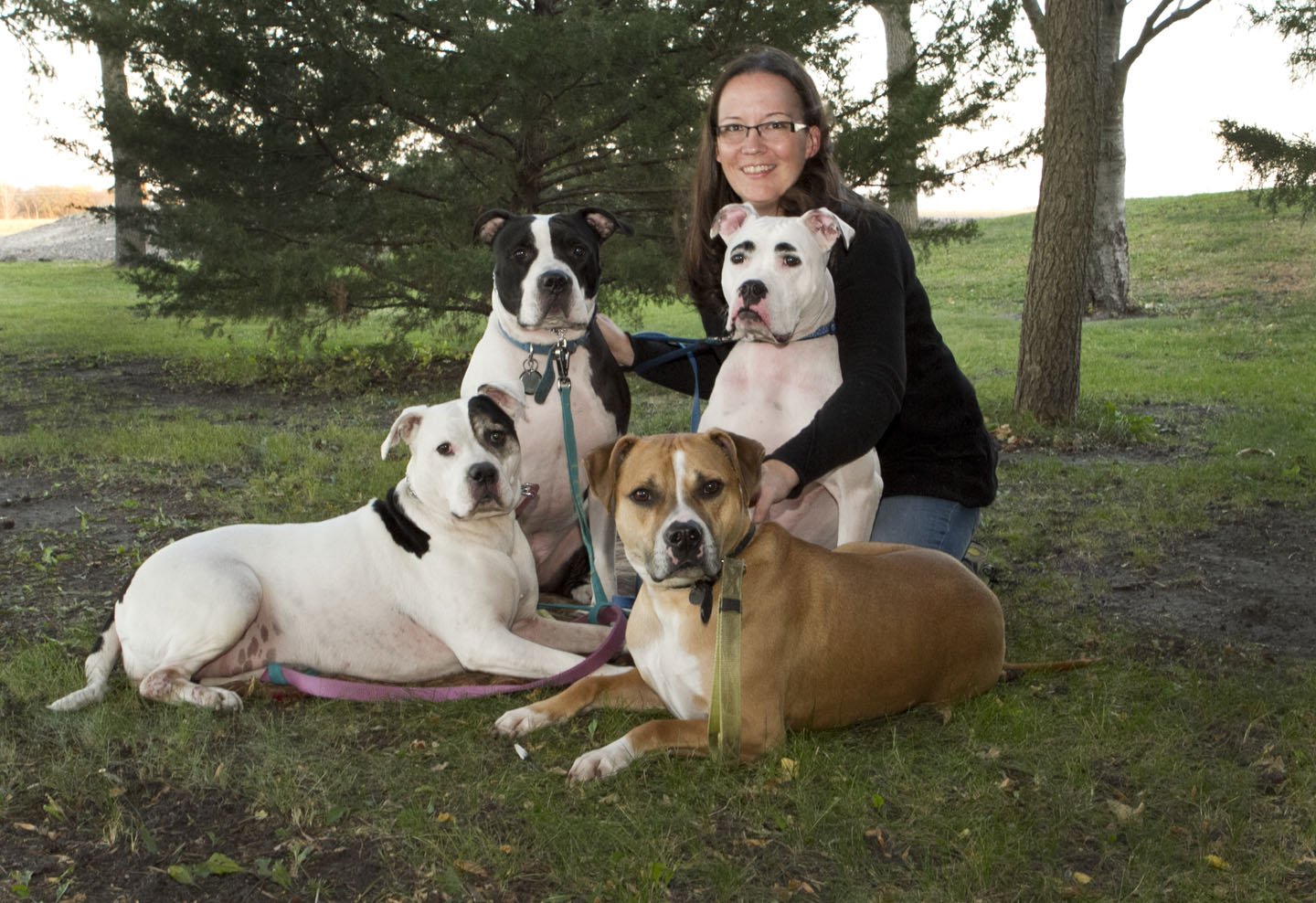