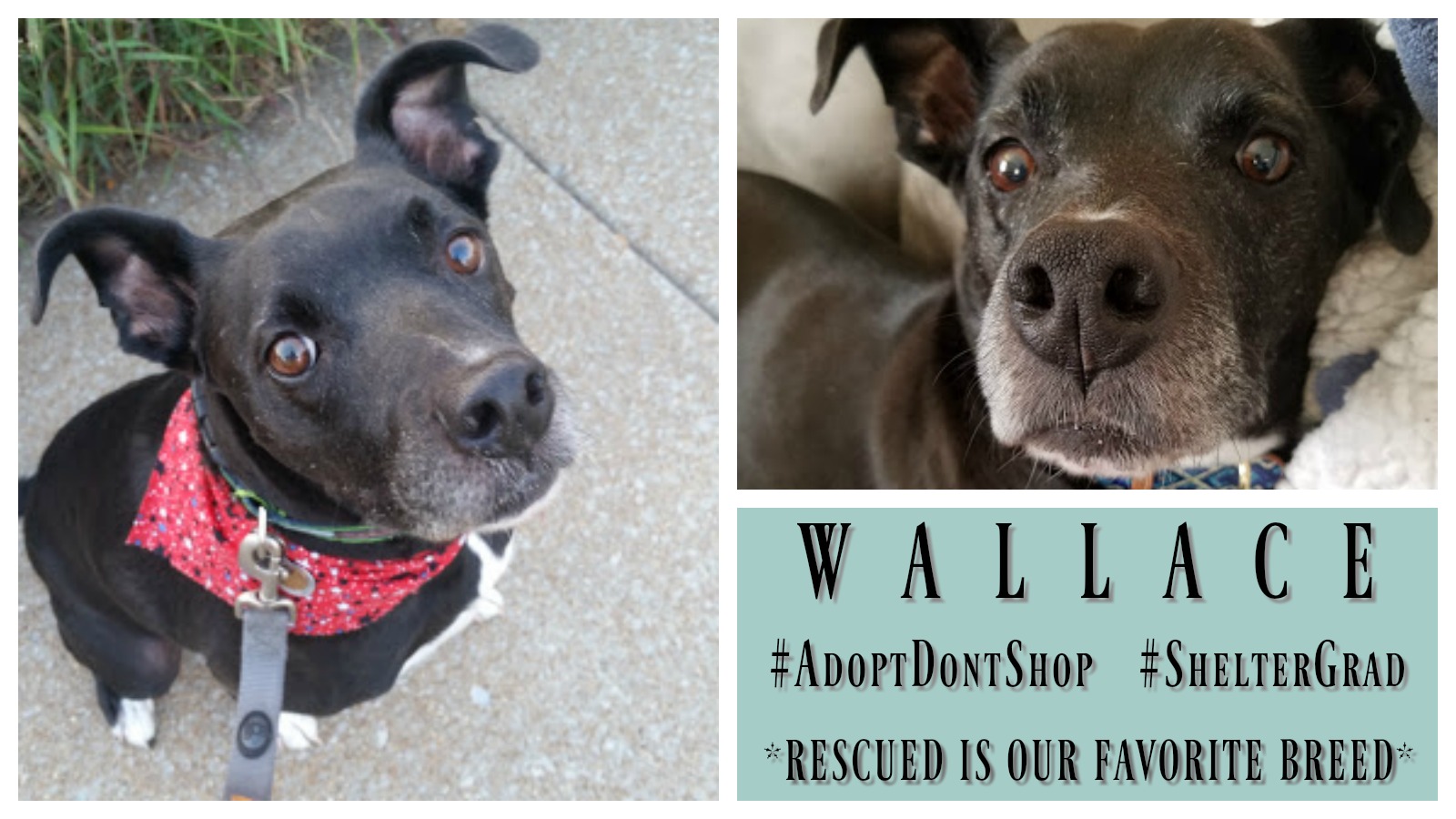 Wallace (aka Mr. Wally Pants) was rescued in Dent County, Missouri, in December 2009. He was picked up as a stray. Dent County Animal Welfare Society named him ‘Quincy’. When he found his forever home, Jennifer, his mom realized that he was fully potty trained and had some other indications of having lived in a home before. Because of this, she thinks he was abandoned by his first human. 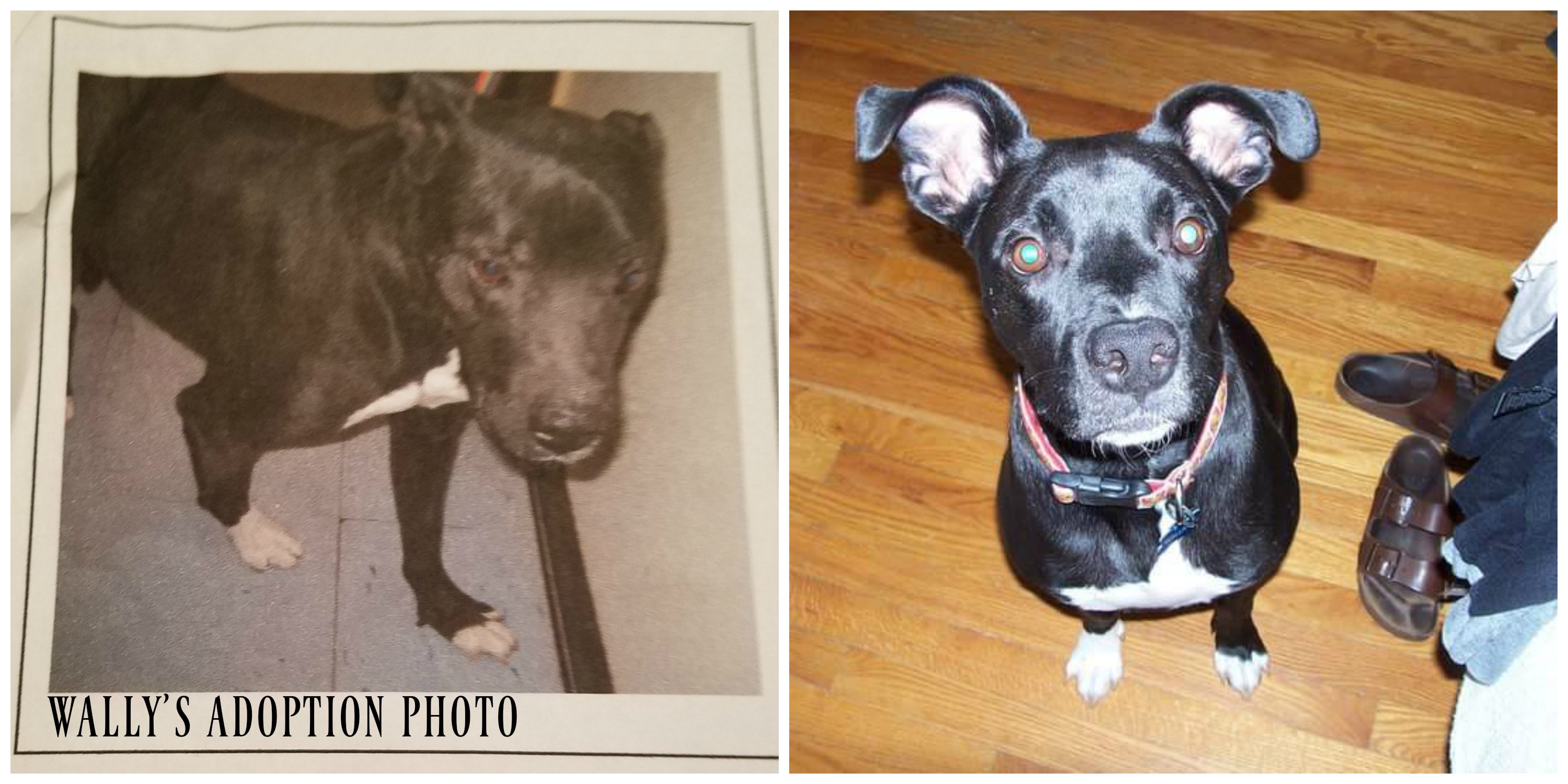 Jennifer saw him in late April of 2010. She was out shopping and the Petsmart in the center was having an adoption event. They had several adoption centers there and numerous dogs under tents in the parking lot. She had just purchased a house and was hoping to get a dog, but thought she’d wait for Fall. Then, Jennifer’s mom called her over to look at some puppies. She figured she’d be safe from falling in love, as she knew she didn’t want a puppy. The puppies were definitely cute, but what caught her eye was another dog that she could only describe later as a ‘furry skeleton’. He leaned on Jennifer when she was petting him and her heart was gone. She couldn’t stop thinking about him. She called that week and arranged to ‘foster to adopt him. She thought if he seemed amenable, she would rename him ‘Wallace’. He reminded her of the kind of dogs that the novelist, David Foster Wallace described adopting — the kinds that were easy to overlook, that looked too far gone to save. 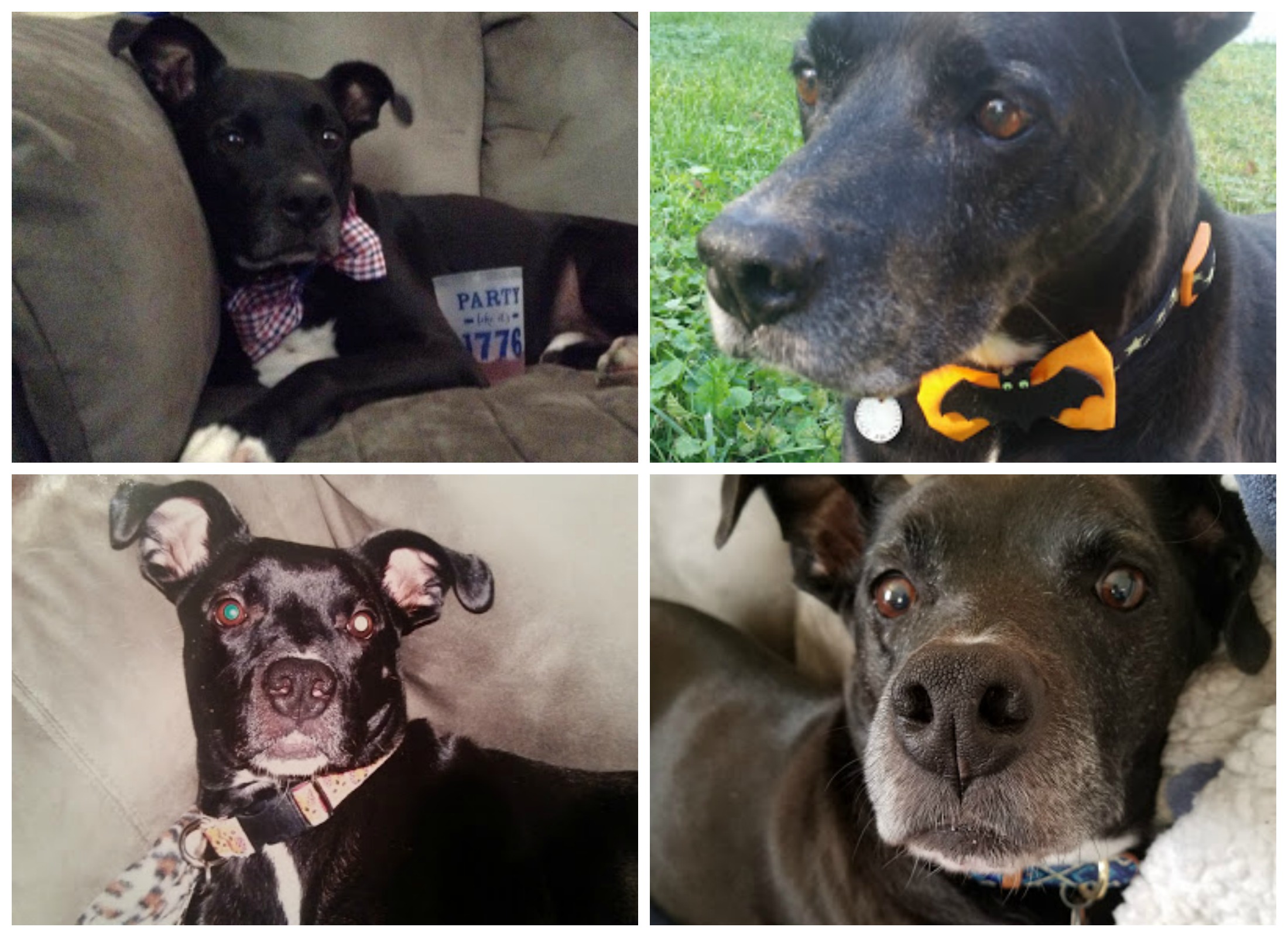 Jennifer met a man from the shelter and signed the paperwork. From the start it was nothing like she expected. Wallace wouldn’t get in the car so she had to pick him up. She brought him to the office to show him off, but he wouldn’t go up the three stairs in the lobby so co-workers had to come out to meet him. He wouldn’t come into his new forever home, so she sat on the back step. Wallace climbed into his new mom’s lap and she scooted into the house where they sat together. He was trembling, and she was half crying and wondering if there was any way this could possibly work.

Jennifer has kind of erased the first week from her memory. She and Wallace had a few kinks to work out. He wasn’t wild about the crate. He pancaked any time there was any tension in the air. He had raging diarrhea. After a particularly bad bout, they established that he had giardia  (she had to repeat the lap scoot to get him into the vet’s office for the first year or so). He finally started putting weight on and Jennifer thought this was going to work out, so she took him to sign the final adoption papers. He refused to go into that same Petsmart where they met. She had to drag him in. They haven’t been back yet, at she doesn’t want to put Wallace through that again. 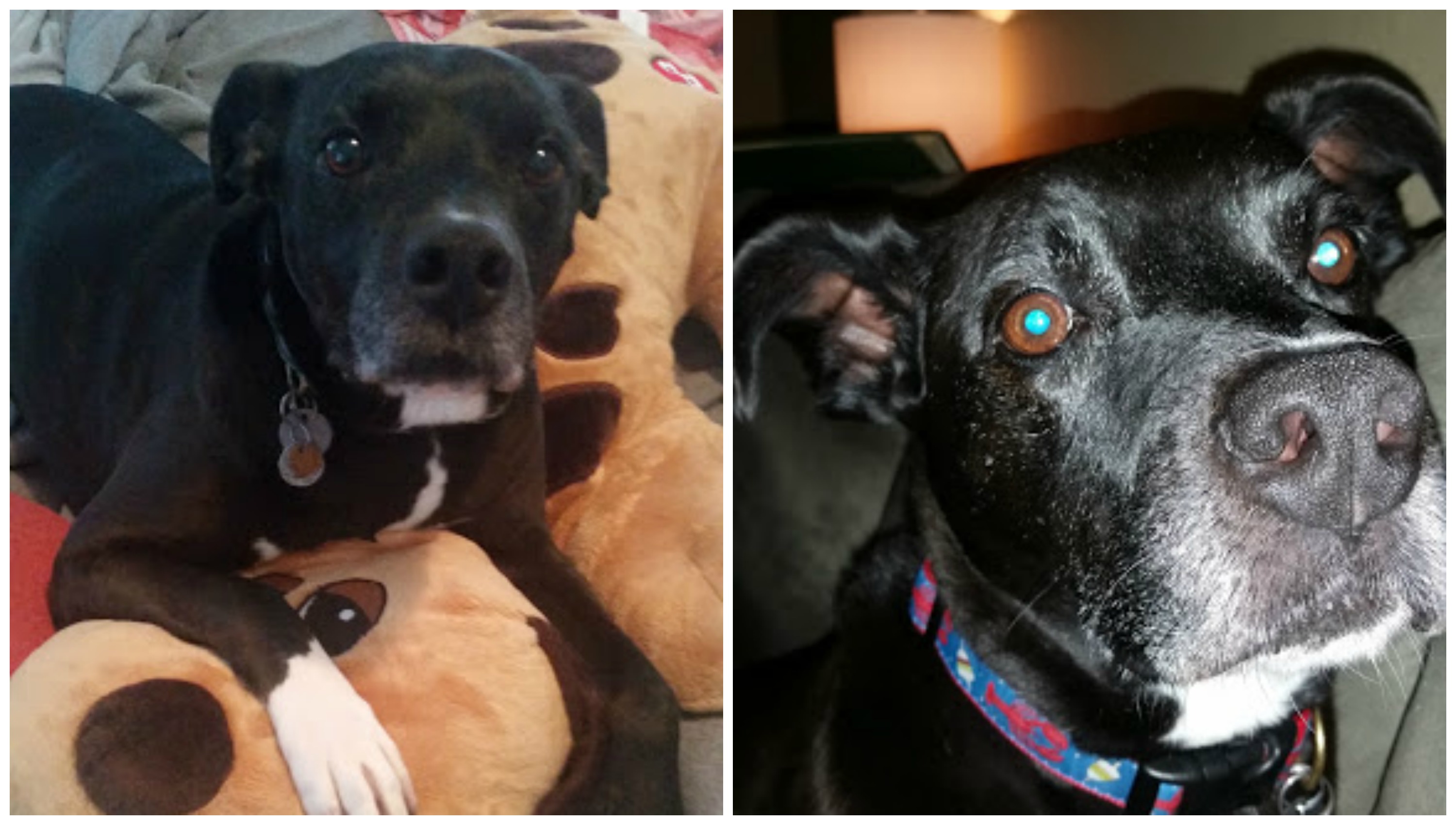 Jennifer doesn’t know how Wallace can still love and trust humans. He recently had some x-rays taken, and the vet her that it looked like he had been shot at some point. His back end is filled with pellets. She was and still is devastated by that revelation. 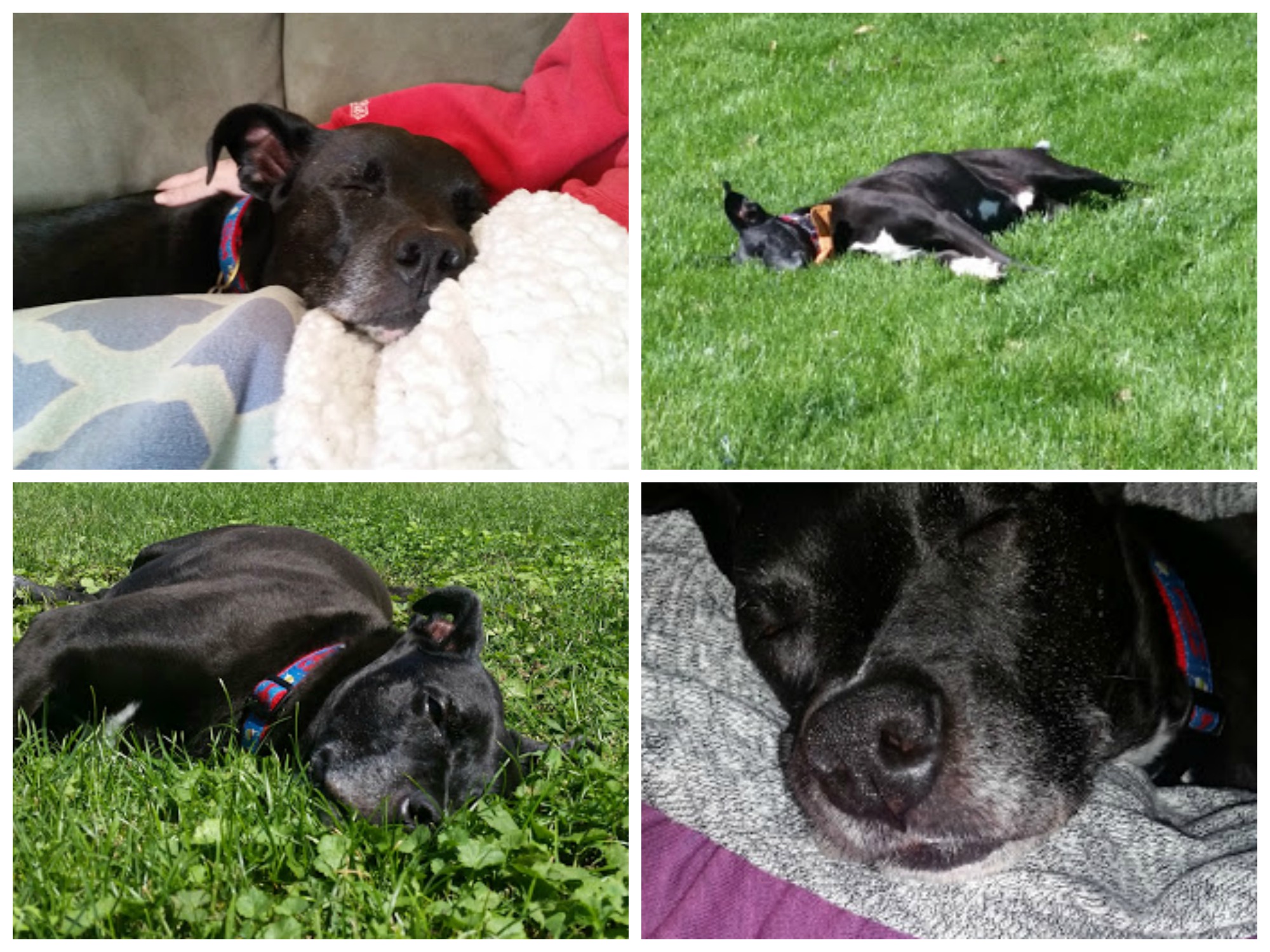 Wallace has come such a long way! Daycare has helped him, and it doesn’t hurt that everyone he meets falls in love with him! His forever mom adores him, and he has made her a calmer and happier person. She lets people know that he has ruiner her for other dogs and she feels so lucky that their paths crossed. She can only hope (in whatever way dogs think about humans), that Wallace loves her even half as much as she loves him. 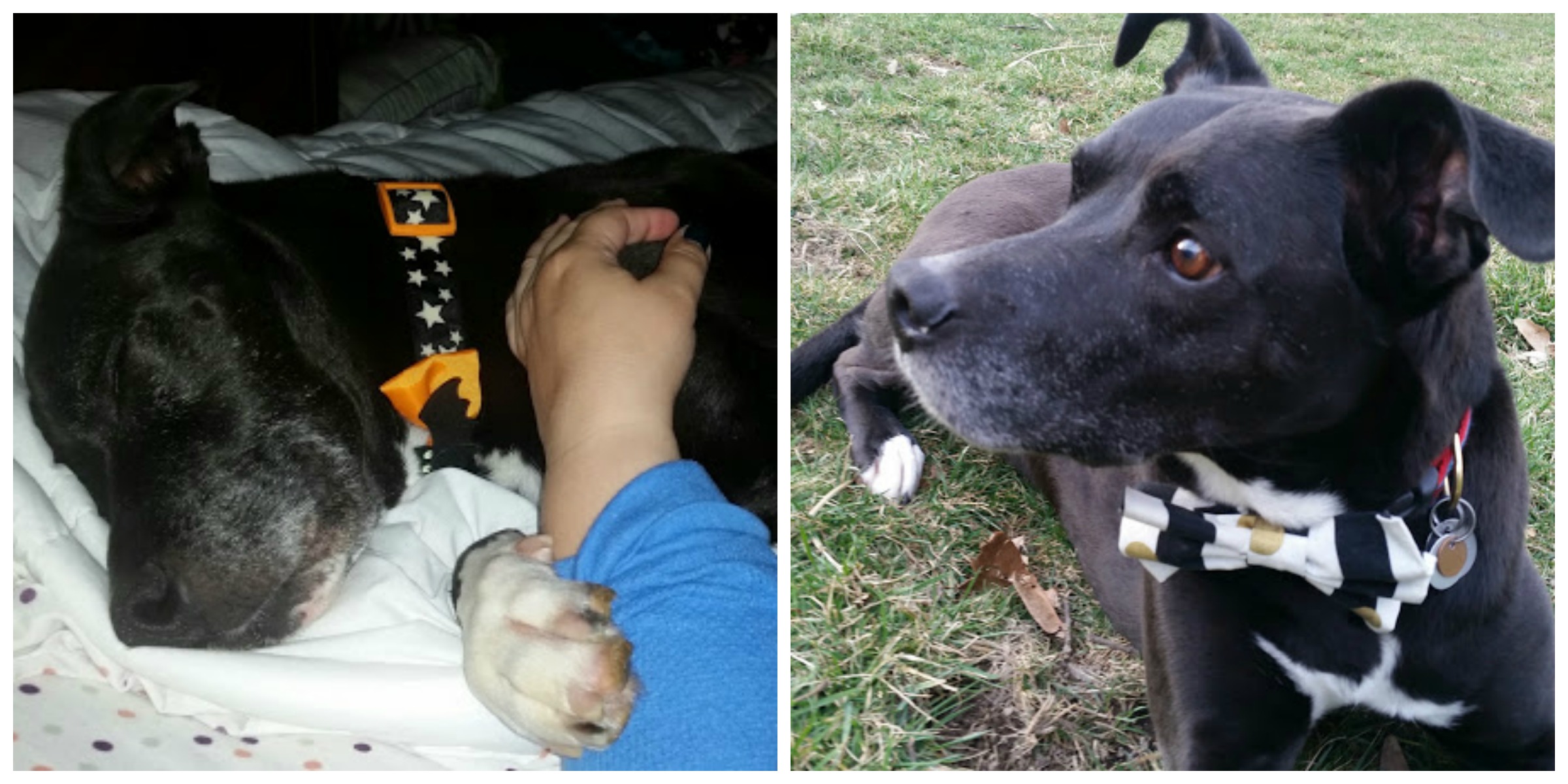 Our friend @lucky.lovable.louie tagged us in the #smilechallenge2017 and the #happydoglife challenge. I am a really happy dog with a really happy person. Or at least a person who I make really happy. We are both so lucky we found each other nearly 7 years ago! #serendipity #love #dogsofstlouis #pitbullsofinstagram

This is my “I love cucumbers” face. #healthnut #dogsofstlouis #pitbullsofinstagram

Has anyone seen my ears? #BHGpetscontest