Angela Lloyd and Hickory during the 2011 Westminster Dog Show Finals, in which Hickory won Best in Show. 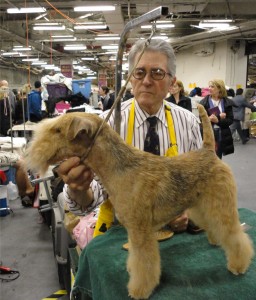 Best-in-Show handler Michael Kemp uses positive reinforcement even when the dog does something incorrectly. 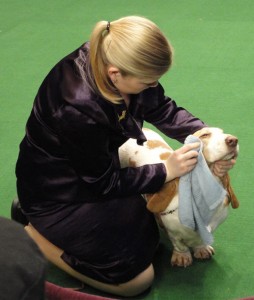 Praise is the key to get inside a dog’s head and heart,” says Angela Lloyd, handler for Hickory, the 2011 Westminster Dog Show’s Best in Show winner. Lloyd believes that dogs respond magnificently “if you are going to show them unconditional love.”

Lloyd’s mother, Gwen Plush says that her daughter “bonds with the animals she shows. She understands them and they love her.” Lloyd, now 31, has been going to dog shows since she was a child and in 1998 earned the Westminster Show’s Junior Showmanship title.

Westminster handler Michael Kemp has won it all. He has shown champion dogs for decades and has won Westminster’s Best in Show, Best in Group, Best in Breed, Best of Opposite Sex, and dozens of other ribbons. How does he do it? “I use as much positive reinforcement as possible.” That means Kemp praises the dog for everything she does, even the wrong things.

“I tell them they’re good so much that they respond to everything,” Kemp says. “I don’t force them. I encourage them to show their best.” In fact, one champion dog Kemp handled “made a career out of being bad. Instead of trying to make her good, I praised her for being bad, even when she misbehaved.” That dog, a Bichon Frisee named Champion Devon’s Puffenstuff, won Best in Group at Westminster two years in a row, Kemp says, “because she was so vivacious.” He recommends that family dog owners should simply “trust the dogs to do their thing.” He says that it’s best to “let dogs use their brain” and that owners should “make something good out of whatever they do.”

Rookie Westminster trainer and handler, Virgina Baxter, uses only positive reinforcement to with three year-old Bull Terrier, Champion Dogmore’s Delight, nicknamed Cricket. “I don’t believe in forceful methods,” says Baxter as she scratches Cricket behind the ears. Instead, Baxter advises, “Ignore what a dog doesn’t do right.” Cricket, in addition to being a champion show dog is also a certified therapy dog that Baxter takes into hospitals.

Junior champion handler, 18 year-old Sarah Broom, has shown her champion Basset Hound, Castle Hill’s Never Too Rich CD, nicknamed Nicole, at Westminster for the past two years. Broom learned to train and handle dogs in the 4H Club and says, “it’s better to tell your dog what she does right.” Broom makes the long hours of training more fun with games and toys. She believes that positive reinforcement is the best way to properly train any dog, whether or not it’s a show dog. She has also trained Nicole to be a companion dog, and together they help at-risk kids read in school programs.

Erin Hall, who specializes in handling America’s most popular breed, the Labrador Retriever, says “we get our best results” with positive reinforcement methods. “These dogs shine. They’re thrilled to please you.” Hall handles Calypso, which has been rated the number one Labrador in the country. With all dogs, Hall uses games and activities that build a dog’s confidence.

There are variety of positive reinforcements methods. All trainers emphasize voice praise. Some trainers also use the clicker, which Bradley notes has increased in recent years. Some trainers use treats, while others don’t use any treats at all. Pat Crowley has handled show dogs at Westminster for 31 of the past 35 years, and while she prefers not to use treats, she uses voice praise and believes in the power of positive touch. “Positive reinforcement is all I use,” says Crowley.