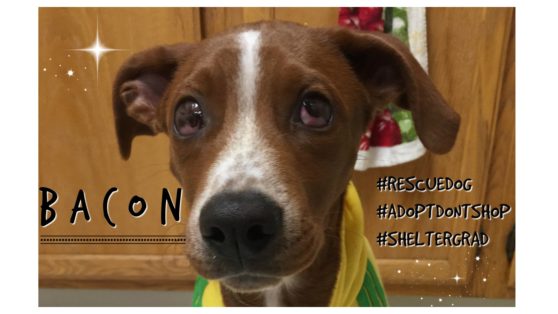 On November 21, 2015, a tiny puppy was born.  He was born a day later then his siblings and was a product of a back yard breeder that was making “Designer Pups” by “trial and error”.  When the pup was born, he was put with his siblings and mother, who thankfully, did not reject him.  As time passed, the breeder noticed that there was something wrong with his eyes, but neglected to take him to a veterinarian.   After about a month, the breeder realized that the puppy’s condition was not improving, and that no one would want to buy him.  The breeder took the pup from his mother and siblings, wrapped him in a blanket, walked to his curb and threw the puppy in his garbage can.  Thankfully, a neighbor saw what the breeder had done, and called a small rescue that was able to save him before he suffocated or was picked up by garbage trucks.  The neighbor did not want to be involved further, so no legal action was taken against the breeder.
The small rescue was unable to pay the vet bills and provide him with the care he needed, so they diligently worked and found SNARR Northeast.  SNARR Northeast accepted the pup and named him Chance.  They immediately posted him to their Facebook page, as they feared it would take a long time for him to get adopted.
Meanwhile, Erin’s son was sick and wanted her to sit with him, so to pass time, she started browsing the internet.  She came across the oddest but most amazing little pup she had ever seen.  Erin read his story, and learned that his blindness was caused by a condition called “symblepharon“.   She also learned that surgery may correct his blindness, or, at some point, he may lose his eyes.  Erin couldn’t fall asleep because she couldn’t get the blind pup out of her mind!  The next morning, she woke up very early and filled out an application to adopt him. It turns out that the pup had only been with his foster mom for a few days before Erin spotted him.  After being approved, Erin drove 12 hours, roundtrip through a blizzard, to pick up her new puppy.
Erin brought the 8 pound puppy home on January 18th, 2016, and named him Bacon McQuade C

ordero.  ‘McQuade’ was the last name of the woman from the small rescue who saved him from the garbage can.  Two days later, Erin took him to the vet, and besides his blindness, Bacon got a clean bill of health!
A week later, Erin took Bacon to get his eyes checked out, and she was able to get a full and comprehensive understanding of Bacon’s condition.  The condition is VERY rare in dogs, especially when a dog is born with is. It is most commonly caused by some sort of trauma and is most common in cats with Feline AIDS.  Symblepharon causes layers upon layers of conjuctiva (whites of the eyes) to grow into the cornea, and the majority of the time, surgery can correct it.  However, in Bacon’s case, the conjuctiva is so thick that the vet couldn’t even see his eyes beneath it.  Bacon also has malformations of his 3rd eyelid, which are also growing into his corneas.  The vet also suspects that Bacon has malformations UNDER his eyes, so, he has drops to help keep any inflammation and pressure down.  He is not a candidate for corrective surgery.   If the pressure rises and can not be managed, his eyes will have to be removed. Thankfully, Bacon is not in any pain!
Bacon is an amazing dog.  He humbles Erin every minute of every day.  He has brought life, light and sunshine into her home.  He’s as happy as any other puppy.  He knows his right from his left, passed obedience school, and is continuing with his training.  When people meet Bacon, he makes them happy, and they are in awe of this special needs pup. Erin is so proud to be his mom, and Bacon rescues HER over and over again.
Adopting a special needs dog has enlightened Erin and brought so much joy into her life.  She hopes others will consider adopting a special needs animal.  She wishes she could find the words to explain how she views the world differently after adopting Bacon, but if you adopt a special needs pup, you will find out for yourself!
Follow Brave Bacon on Instagram @baconandmommy

This was my very first day with my shiny new medal .. We are all about spreading the word to #endbsl #endbslworldwide ARE YOU??? You don’t have to be a #pitbull to know This is a devastating and deplorable action #joinus & #standuptobsl …together all of us with @nila_blue_staffy @dawggrillz can Show the world that we won’t ignore it!!@nila_blue_staffy & @dawggrillz have raised $3,500 of their $10,000 goal we are making a half way donation at $5000 to go to @fresnobullyrescue & @staffyandbullybreedrescue????! Every tag sold helps bully breeds in need and raises awareness on HOW WRONG BREED SPECIFIC LEGISLATION REALLY IS. Get yours with ????FREE WORLDWIDE SHIPPING???? LINK IS IN @nila_blue_staffy BIO #ENDBSL #SaveADawgWithNila #DawgGrillz