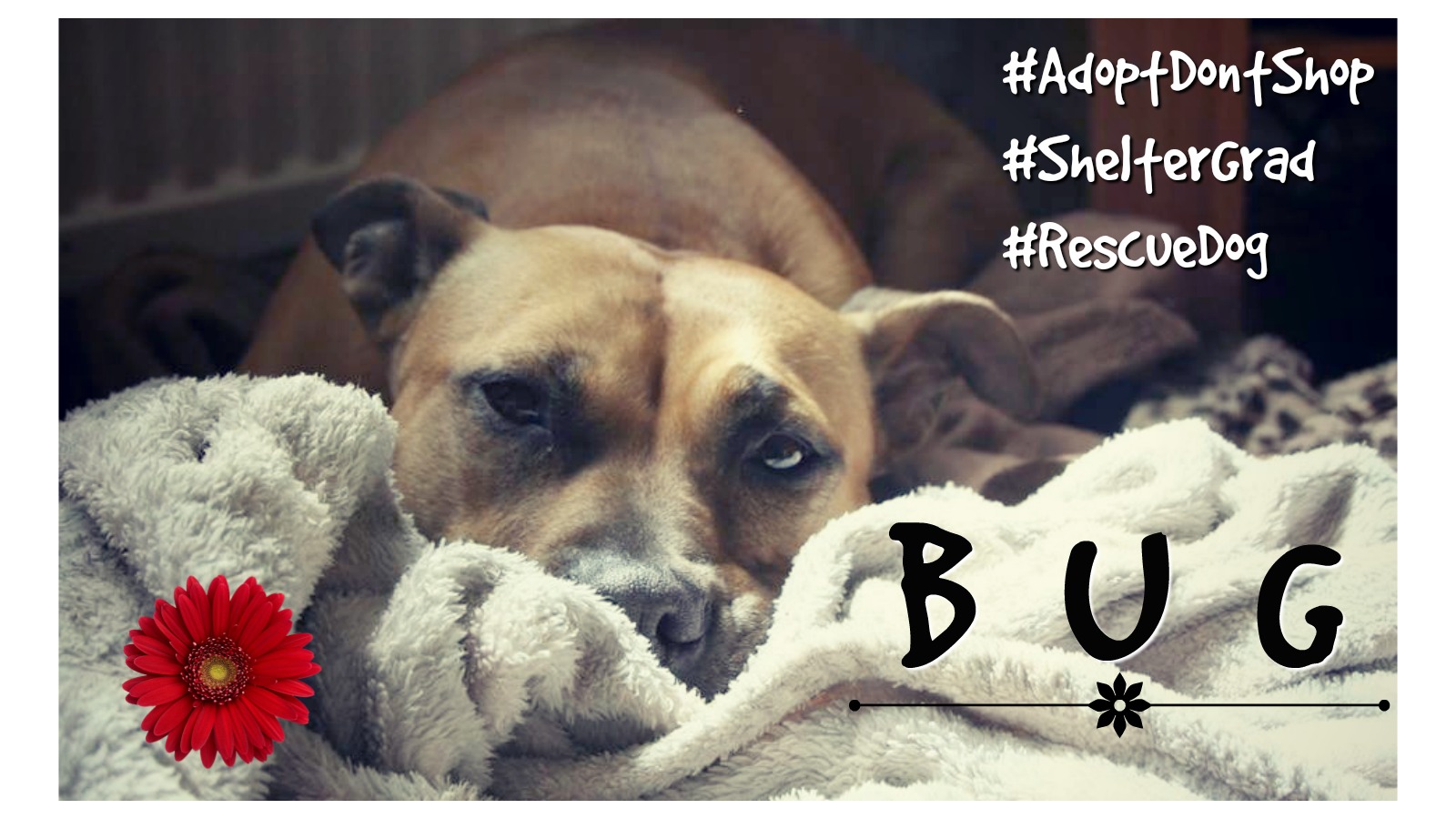 Rachel had been working at the shelter for around 3 months when Bug arrived. She was called to collect yet another stray, the 3rd of the morning. Bug was backed up between her “finder’s” legs, barking and wetting herself, and with a rope around her neck. Rachel could tell that the dog had recently given birth as she greeted Bug, a terrified, aggressive little ball of energy with an uncertain future. Rachel took Bug to her new kennel, though she was so petrified, it was a struggle to get her there. The rescue organization was concerned that Bug was a Pit Bull “type”, so she was kept in kennels under a strict “no contact” policy until assessment. Eventually, Bug was deemed not to be a Pit Bull type. Bug had severe mastitis due to over-breeding, scarring to various parts of her body and was clinging to any toys in her kennel as though they were her puppies. She was unsocialized, sad and scared.

g food into her kennel, but she was too afraid to interact. She would watch Rachel from her bed, erupting into waves of barking and growling any time that Rachel moved too close. Rachel begged management to give her more time, which they accepted. 6 weeks passed and, Bug was running out of time.  The shelter was completely full and strays were arriving all of the time. Rachel sat with Bug at every available opportunity and felt confident enough to sit inside her run – a risky move – but thankfully, the right one. Bug finally approached Rachel one day with her ears pinned back, crawling and shaking. She sniffed Rachel all over while Rachel sat like a statue, before exploding into display of wiggles, licks and cuddles. From that day forward, Bug greeted Rachel like a long lost friend, but didn’t trust any of the other staff to enter her kennel. Many of the staff also had a distrust of Bug and she was not exercised when Bug wasn’t working.

in the evenings, despite living in a top floor flat with a no pets contract. In Rachel’s house, Bug was quiet, affectionate and desperate to be a “good girl”. Bug’s confidence improved and she was moved out to a rehoming block with a wonderful handler who was kind and patient, but Bug still remained at the top of the “PTS” (put to sleep) list, should the rescue run out of space. Rachel took Bug back to the kennels with her each day and home again during the evenings/weekends whenever possible, but nobody showed any interest in adopting her due to her behavior at the kennel front. The rescue agreed to spay Bug, due to repeated phantom pregnancies.  They also fixed her teeth and removed a small, black lump that had appeared on her leg. Thankfully the results from the lump removal came back as “all clear” and she healed well.

Bug had been in the kennels for 10 months at this point, without a single person showing any interest in adopting her. Bug is extremely sensitive and could not cope with the loud, stressful kennel environment. She would take 2 steps forward and 1 back in her progress. Rachel wished that she could adopt her but at 20 years old, with no money, living in a flat and working full time, Rachel wanted a better life for Bug. Rachel continued to train her and work on her socialization. Bug was terrified of men and other dogs and would show this by barking and lunging on lead, but had never attempted to bite anybody.

Rachel’s landlord had discovered that she was bringing a dog home and gave her notice, leaving Rachel and Bug in a sticky situation. Bug wouldn’t cope living in the kennels permanently, without her “down time” and exercise. Rachel walked Bug at 10pm every night, when the city was quiet and she wouldn’t have to encounter too many people or other dogs.  Rachel had no family in the city and nowhere to live. She took Bug into work and explained the situation, all while trying to find a place to call home. A few days later, Rachel was assisting the vets with another stray when she was called into a separate room. The vets told her that they had gotten Bug’s results mixed up with another dog’s – the lump that was removed was a grade 6 Malignant Melanoma. Bug had cancer and a 6 month prognosis. Management was informed and Rachel was told that if she did not adopt Bug, she would be put to sleep that afternoon.  Rachel immediately signed the adoption papers! 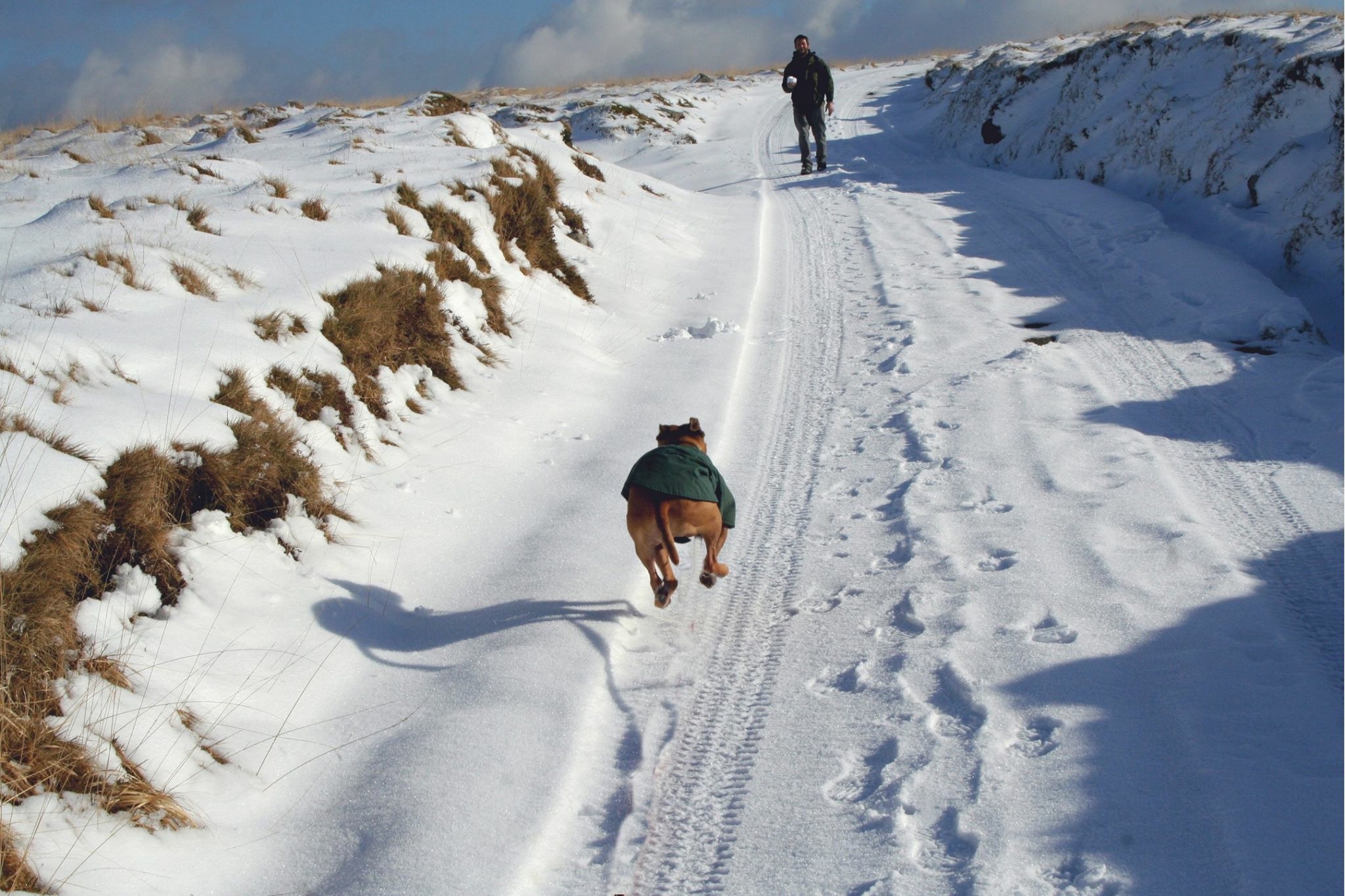 Bug lives in Devon, UK, and has been with Rachel for 5 years now. She is cancer free and without a doubt, Rachel’s best friend! She is still afraid of some things, but you would never know her background if you met her now. Rachel and Bug go on adventures together every day and she has a family that loves her unconditionally!

Bug says THANK YOU to everybody that voted for her in the @rescue_factor competition ???? we came 4th and that means that Bug has won her very own ladybug bandana ???? she’s gonna look so pretty! Thank you @thedandydogboutique ????

We were tagged by @taylor_the_epileptic_staffy to complete the #howisleep challenge ???????? Bug can be a bit of a fussy sleepy… She needs just the right amount of warmth/blankets and a human to fall asleep properly! We have tagged some friends to join in ????

We were tagged by the completely gorgeous @rugertherott to complete the #manyfaces challenge ???? we have tagged some friends to join in ????

We have had some questions recently about Bug’s background – here’s her story. I was working at the kennels and called to collect a terrified, aggressive stray staffy. The rescue thought that she was “type” and she was under a strict “no contact” policy. The DLO’s could not enter her kennel due to aggression, but they deemed her as “not type” but not re-homeable. Bug had mastitis, scarring and was clinging to toys in her kennel as if they were puppies. She was put to the top of the PTS list and stayed there for her entire stay. I sat with Bug daily, but she was too afraid to interact. 6 weeks passed and I felt confident enough to sit inside her run – Bug finally approached, ears pinned back, crawling and shaking. She cautiously sniffed me all over before exploding into wiggles, licks and cuddles. From that day forward Bug greeted me like a long lost friend, but wouldn’t allow any other staff into her kennel, she was never exercised when I wasn’t working. I began taking Bug home, despite living in a top floor flat with a no pets contract. Bug’s confidence improved and she was moved to a rehoming block with a wonderful handler, but nobody showed interest in adoption. The rescue agreed to spay her, due to repeated phantom pregnancies and remove a lump on her leg. The results came back all clear, I began temporarily fostering her and she healed well. Bug had been with the kennels for 15 months while I fought to keep her, so many dogs died instead of her and there were times when I wondered if we were doing the right thing. Bug is extremely sensitive and her behaviour deteriorated. I continued to train and socialise her – Bug was terrified of men and dogs but had never attempted to bite. My landlord later discovered that I had a dog and gave me my notice, leaving me homeless. A few days later I was called in at work, the vets had gotten Bug’s results mixed up – the lump that was removed was a grade 6 Malignant Melanoma, Bug had cancer and a 6 month prognosis. I was told that if I did not adopt that afternoon, Bug would be PTS. I signed the adoption papers. 5 years on, Bug is now cancer free ????

We were tagged by the super cute @staffytails to complete the #strikeapose challenge.. This is Bug in her natural habitat.. Sunbathing ???? We have tagged some friends to join in ???? this is also our entry for #rescuefactorfuninthesun ☀️☀️☀️☀️☀️

Waking up to these two is the best birthday present anybody could gift! So grateful to have them in my life ❤️

Moving day! As long as she has her teddies and her snugs… ????

Words cannot describe my love for this beautiful little soul ????

Such a proud little peach in her #endbsl medal ????

Someone was SUPER excited to be playing with the water today ???????? little gremlin ????