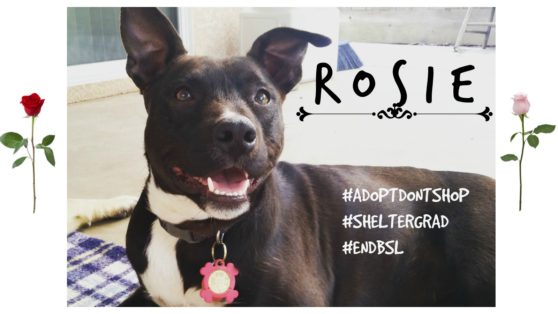 As a junior in high school, Sandra had done a marketing internship for the Valley Animal Center (in Fresno) under the guidance of a woman named Rosie Davenport.  A year later, as a senior, Sandra visited the shelter to make a food donation, and she ended up going into the kennels to say hello to some long-time residents that had yet to be adopted.
That’s when Sandra met Mage, who was flopping around all over her kennel.  Mage’s previous story is unknown, but she probably came to the shelter after she was dumped somewhere as an unwanted puppy.  When Sandra walked past Mage’s kennel, Mage put her tummy against the fence so Sandra could pet her.  She started licking Sandra and nipping at her fingers. Sandra looked into Mage’s eyes and knew she was going to give her a forever home! Sandra and her family were living on a rental property and the landlords made their no-dog policy clear, but  Sandra was determined. Mage WAS going to come home with her!! After two days of relentlessly begging her parents, and multiple calls to the landlord, Mage was allowed to come home. Sandra named her Rosie, after the woman who helped her realize her love and passion for rescues.
The day Sandra rescued Rosie was the day she decided she wouldn’t kill herself. 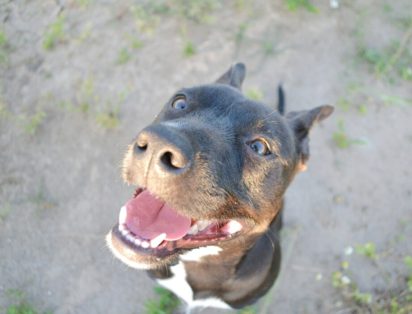 Sandra had been battling depression and crippling anxiety for a year, and she had decided she couldn’t handle living like that anymore. However, she now had this little puppy depending on her, and she refused to leave her after fighting so hard to have Rosie in her life.  Sandra remembers asking about Rosie when her dad came with her to the shelter look at this “pit bull” dog that she was so excited about.  Sandra asked why such a friendly bundle of energy hadn’t been adopted yet, and the girl behind the counter just replied with, “She’s black and she’s a pit bull. People are superstitious.” Sandra remembers wondering what kind of shallow human being could look at this puppy, with her big brown eyes, and then walk by her kennel simply because it was labeled “pit bull”.
Rosie’s story isn’t much different than any other shelter dog’s story. At least, not to anyone but Sandra 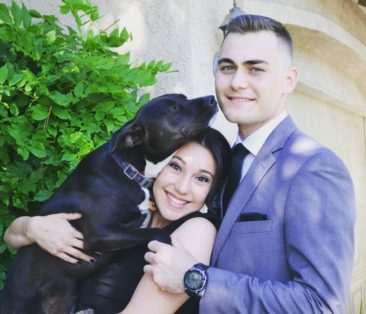 . Every time Sandra gets scared or feels like giving up again, she just looks at Rosie’s happy “pit bull” smile and she knows they’ll be okay. They have each other!
Sandra’s goal is to train Rosie to be a certified therapy dog within the next couple years. She wants to spread awareness of rescue, fight stereotypes against bully breeds to fight BSL, and help those who have severe depression and anxiety, like Sandra did.

Tongue out Tuesday? Sure, if you give me the cheese in your hand! #TongueOutTuesday #FMAadvocate

Look into our eyes… You will leave the bag of treats by the door and leave. Do you understand? Good.. Go ahead, hooman. Please don’t forget to donate $1 to the link in our bio! All funds we raise will go towards much needed reactivity training for Kaiser.

“Intervention” training session Command: Enough When Kaiser gets annoyed with Rosie he tries to put his entire mouth over the widest part of her back, and he can. He’s a big guy. Mom usually puts us in situations with a toy we usually “argue” over in a small, controlled environment (unfortunately, that’s our small back yard). When we start getting too talkative with each other and tails stop wagging (we were at that point in this video) mom gives us our “Enough” command and we are both supposed to drop the toy/blanket/step away from food. We are only given this command when we play with each other.. Mainly because we only play too rough with each other and never other dogs. We did pretty good right after this video was over. Rose held on for slightly too long and got a verbal correction ???? Rose has always had possessiveness issues over toys, food, treats, blankets, etc. Mom has put a stop to most of this by taking her things and saying “Mine”. Mom won’t give Rosie back her stuff until she sits next to Mom and asks “permission” by putting her paw on Mom’s leg and waiting patiently. This is Rose telling Mom “I’m sorry I was being a possessive shit. I’ll share now” ????